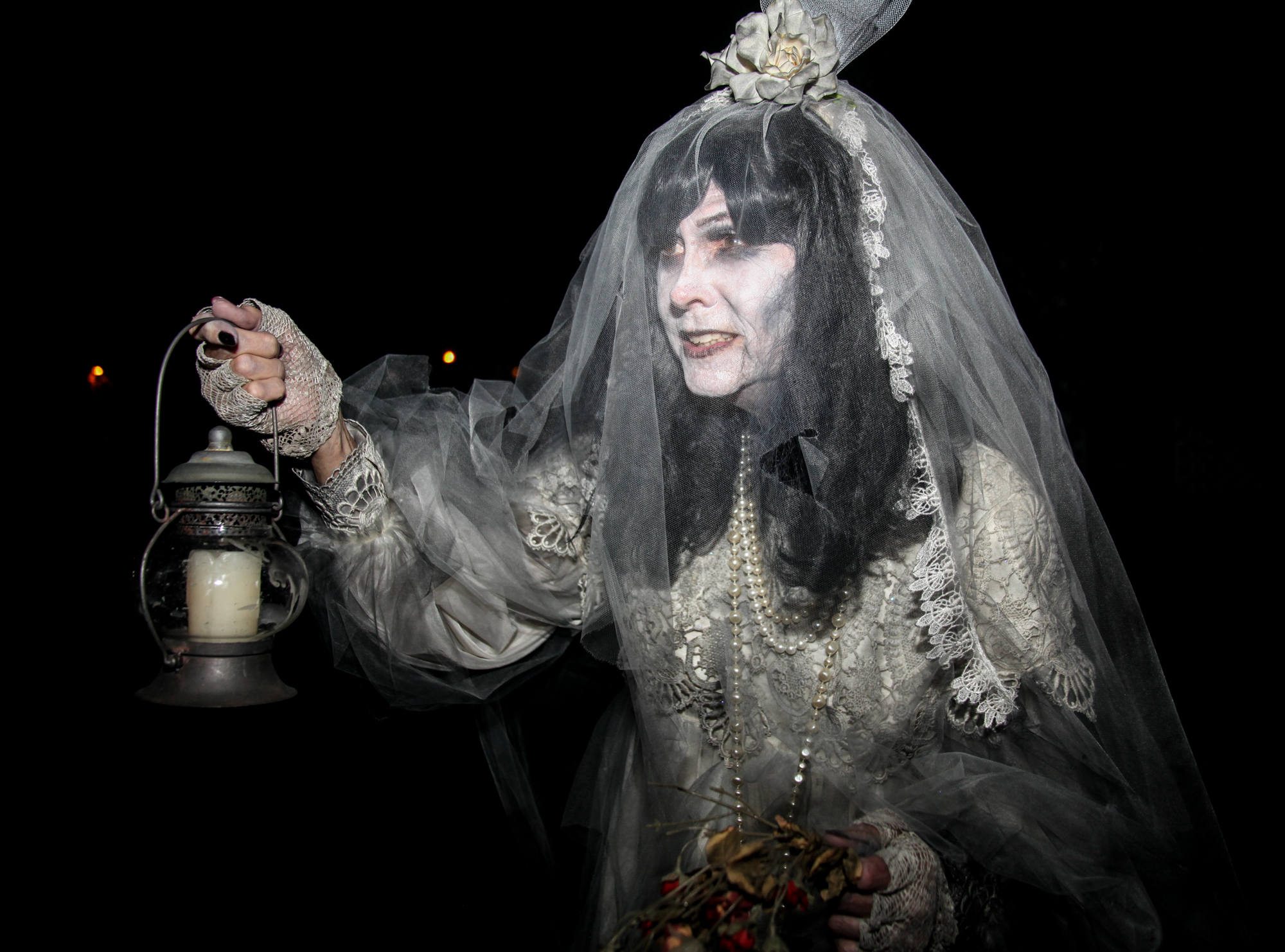 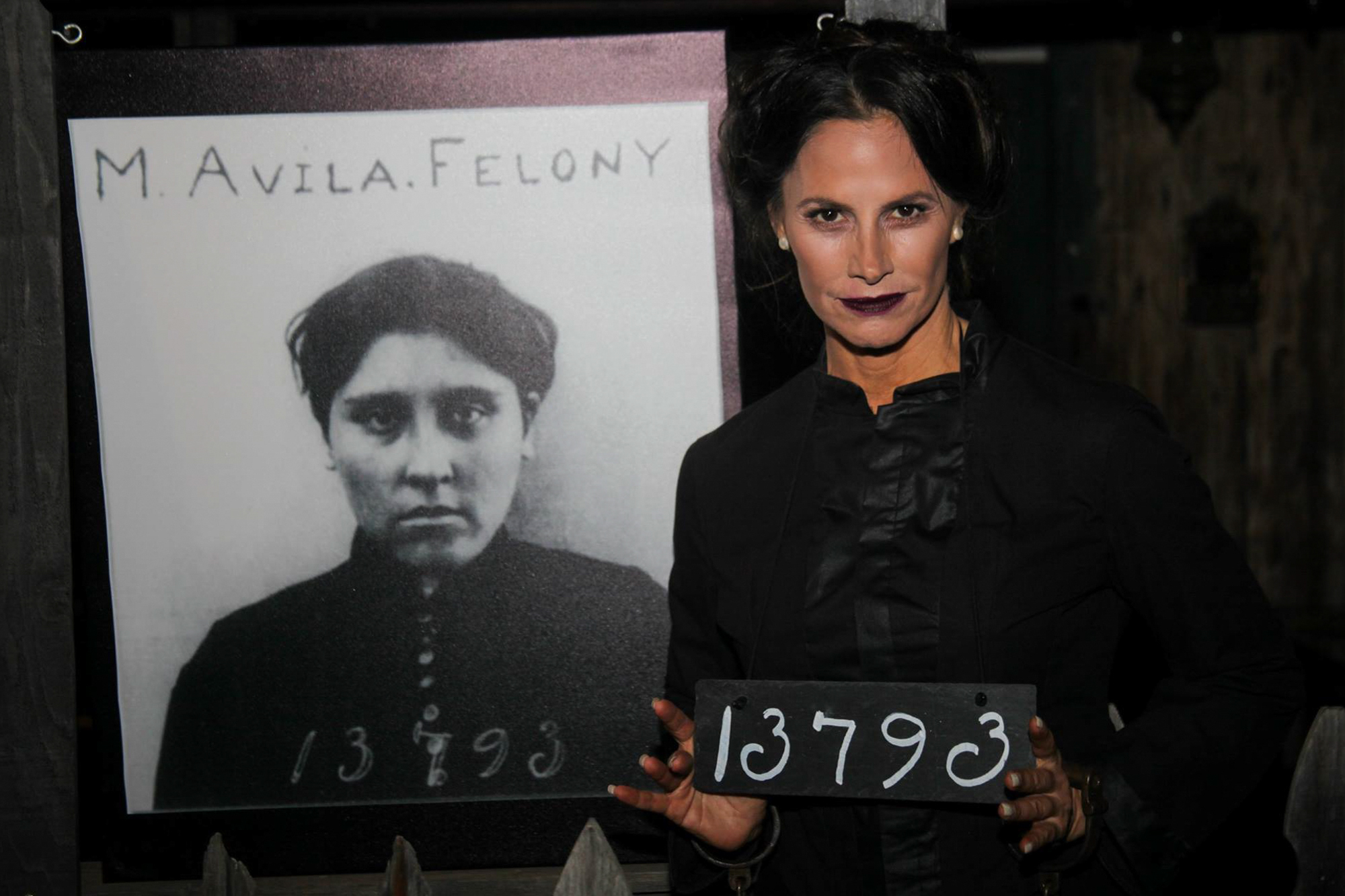 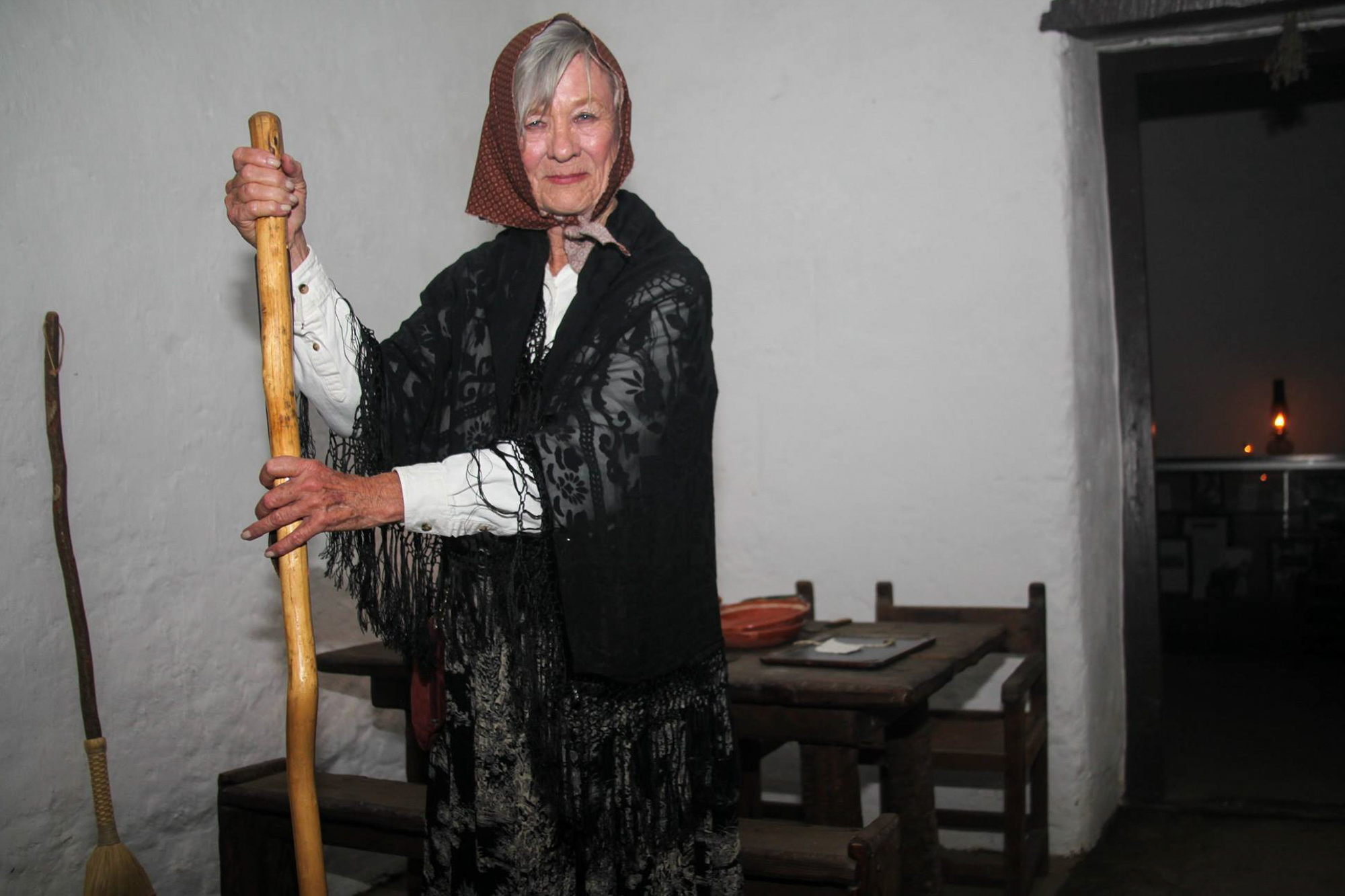 Mission docent C.J. Devins plays the role of Polonia Montanez, a religious educator at the Mission during the 1800s. Photo: Allison Jarrell 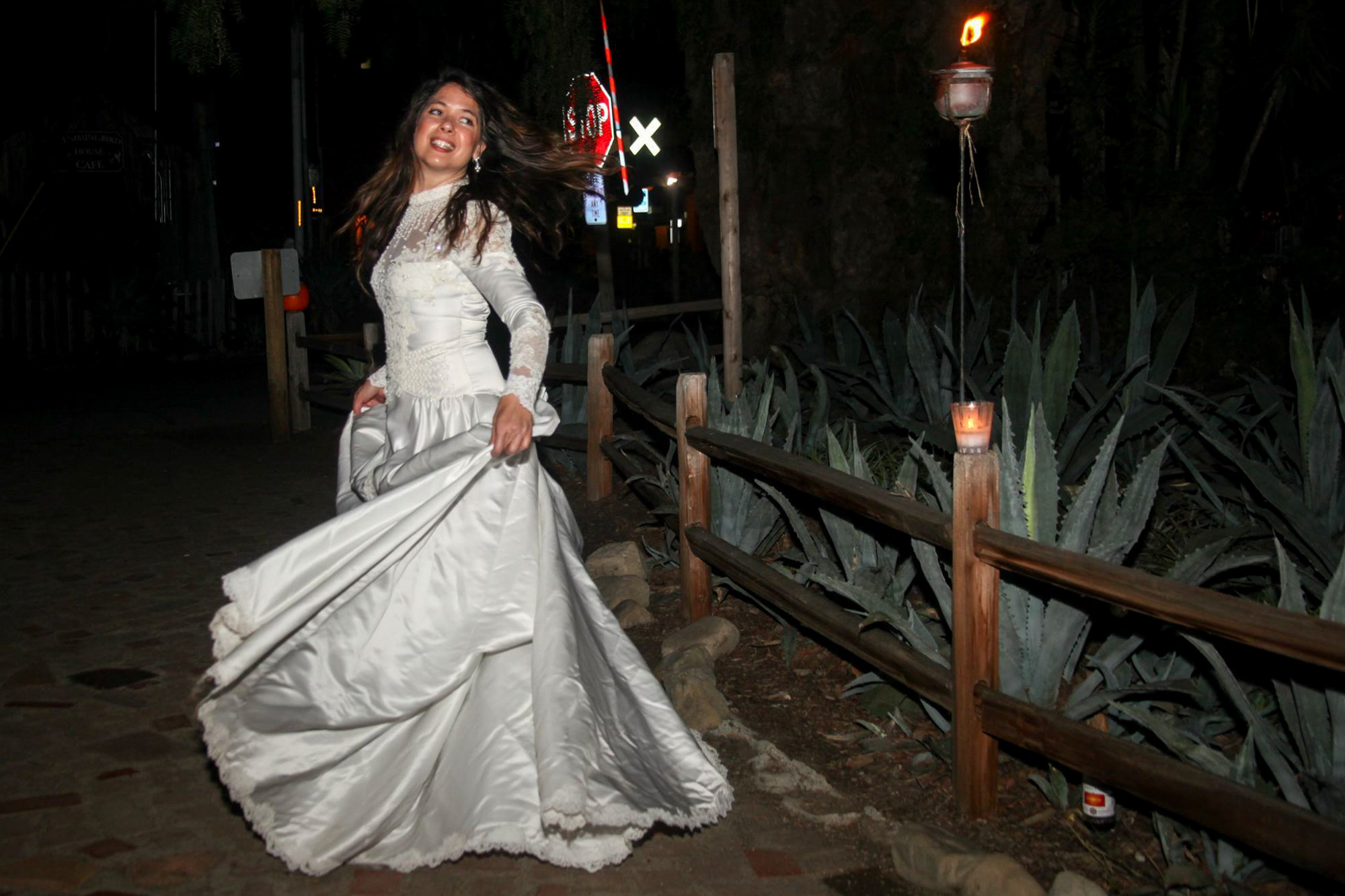 Monica Mukai, of San Juan Capistrano, dances through Los Rios Park as the White Lady, a friendly spirit who has been spotted in town. Photo: Allison Jarrell 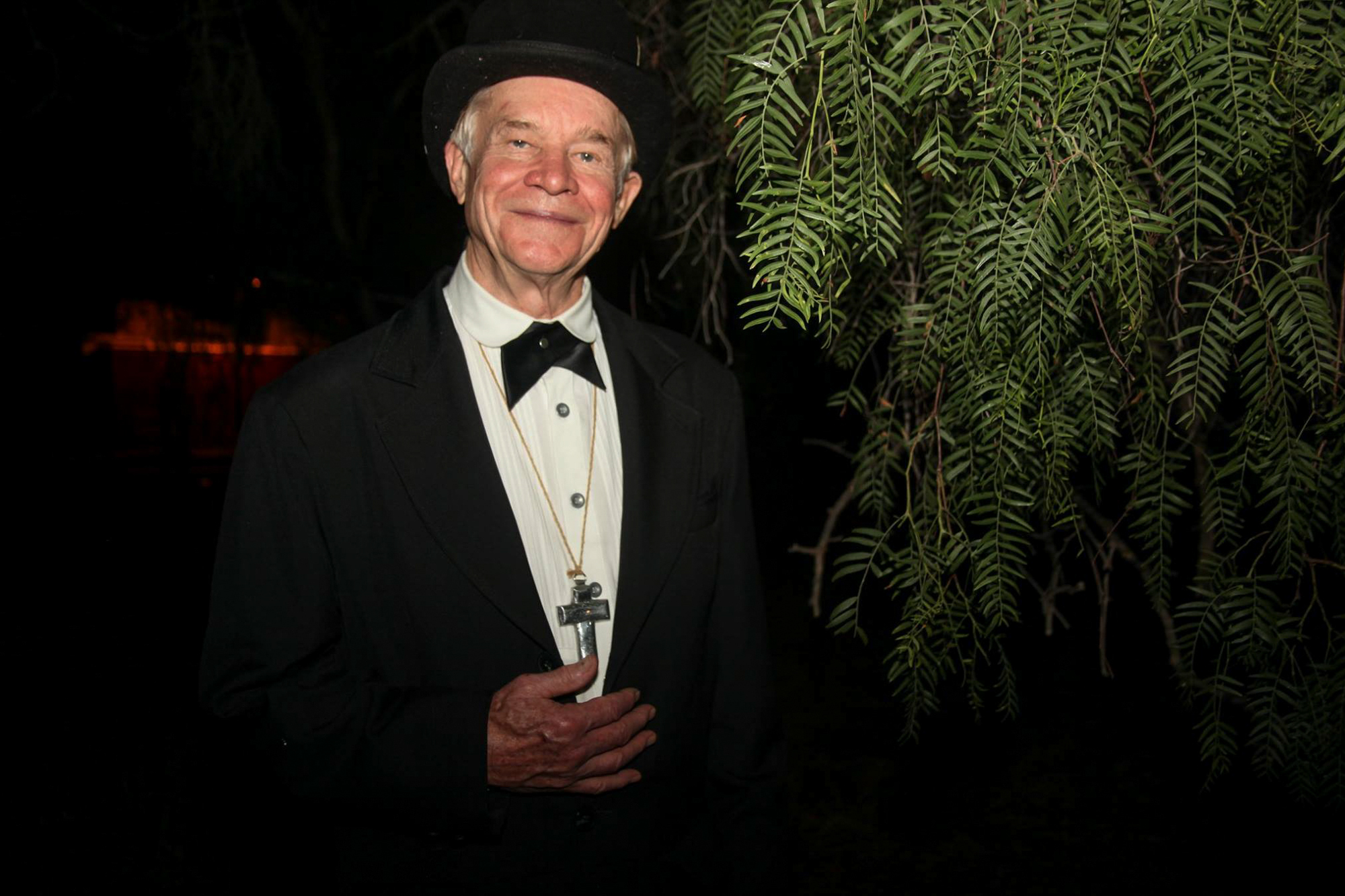 “San Juan Capistrano is an old community with time-honored traditions. It has its swallows, its mission, its bandits and its heroes. It has buried treasure, a devil dog, and assorted witches. It also has more ghost stories per capita than any other community in Orange County.” —Pamela Hallan-Gibson, “Ghost and Legends of San Juan Capistrano”

Each year, toward the end of October, it’s common to see figures floating along a dark Los Rios corridor.

But as many locals know, it’s not Halloween playing tricks on your eyes. For over four decades, people have descended upon Los Rios Street to learn about the spirits that still haunt the oldest neighborhood in California.

The tradition began in the early 1970s, and it didn’t necessarily stem from a love of all things spooky.

Lorie Porter, a longtime walking tour guide who also serves on the Historical Society board, said the town’s regular walking tours were first created in the 70s in order to promote community awareness.

“We had no preservation rules whatsoever in the early 70s,” Porter said. “We saw two adobes just wash away, and the owners of the properties wouldn’t do anything about it.”

So, Porter and a few others hatched the idea to take residents and visitors around to historical sites so they could see firsthand what was at stake.

“It was mainly to get people to know what was going on and to put some pressure on whomever,” Porter said.

It was a year or two later that the idea came about for themed walking tours based on San Juan’s folklore. Porter said initially the event began with just a few guides taking groups over to the Mission and back to Los Rios Street, and eventually that morphed into guides walking up and down Los Rios Street with visitors.

Porter said those first events “went over really well,” but to save the guides from running back and forth, they decided to switch up the format. Each guide would be stationed where a legend or ghost story took place, and that guide would act the tale out for guests as one of the spirits.

Each of the eight stories told during the tours are rooted in Los Rios District legends, and all have been passed down by old-timers. Pamela Hallan-Gibson, author of the book, “Ghost and Legends of San Juan Capistrano,” of which the tours are based, is a fifth-generation Californian herself and heard the stories from relatives, friends and acquaintances.

Porter said they often have older residents come by for the Ghost & Legends tour, and so far they’ve never been corrected when it comes to the way they spin a yarn.

“Either we’re doing it right, or they just don’t care,” she said with a grin.

Porter never imagined the modest walking tours would grow to be so in-demand. Last Halloween, they guided 500 people down Los Rios Street, and each year they sell out ahead of time. Any more, and she said they may have to add a third day of tours in the future.

Porter attributes some of the hype to Halloween becoming more popular.

“It’s a fun way to celebrate Halloween. Amusement parks and all that are fun too, but this is just different,” Porter said. “I think the idea that our stories are real stories about people who lived here has a lot to do with it. They aren’t made up.”

There are stories like that of the White Lady, who can often be seen dancing or walking about Los Rios Street. She may be the ghost of a young woman who died when her buggy flipped over on the way to a school dance, but no one is quite sure. What is known about her is that she’s a friendly spirit—one who even helps people find buried treasure, or so the legend goes. It’s been said that the White Lady emits a light down into the earth, and if you see it, you must mark the spot but wait to dig until the next morning, after she’s left.

Porter said she once heard a story from an old-timer who took his mattress out into his barn and slept there for two nights, because the first time he saw the White Lady and marked the spot, it was a complete miss.

“He couldn’t find it the first time he dug, so he thought he’d try a second time,” she laughed. “You won’t find that one in the book.”

Staying true to their intended purpose, Porter said all proceeds from the Ghost & Legends tours, and the regular walking tours, go toward historical preservation, specifically to care for the town’s aging adobes.

She added that this is the first year that the Historical Society is co-sponsoring the event along with the walking tour guides. The society’s volunteers and board members have been working on renovating the Silvas Adobe adjacent to the O’Neill Museum, and Porter plans to help furnish the adobe with the funds raised.