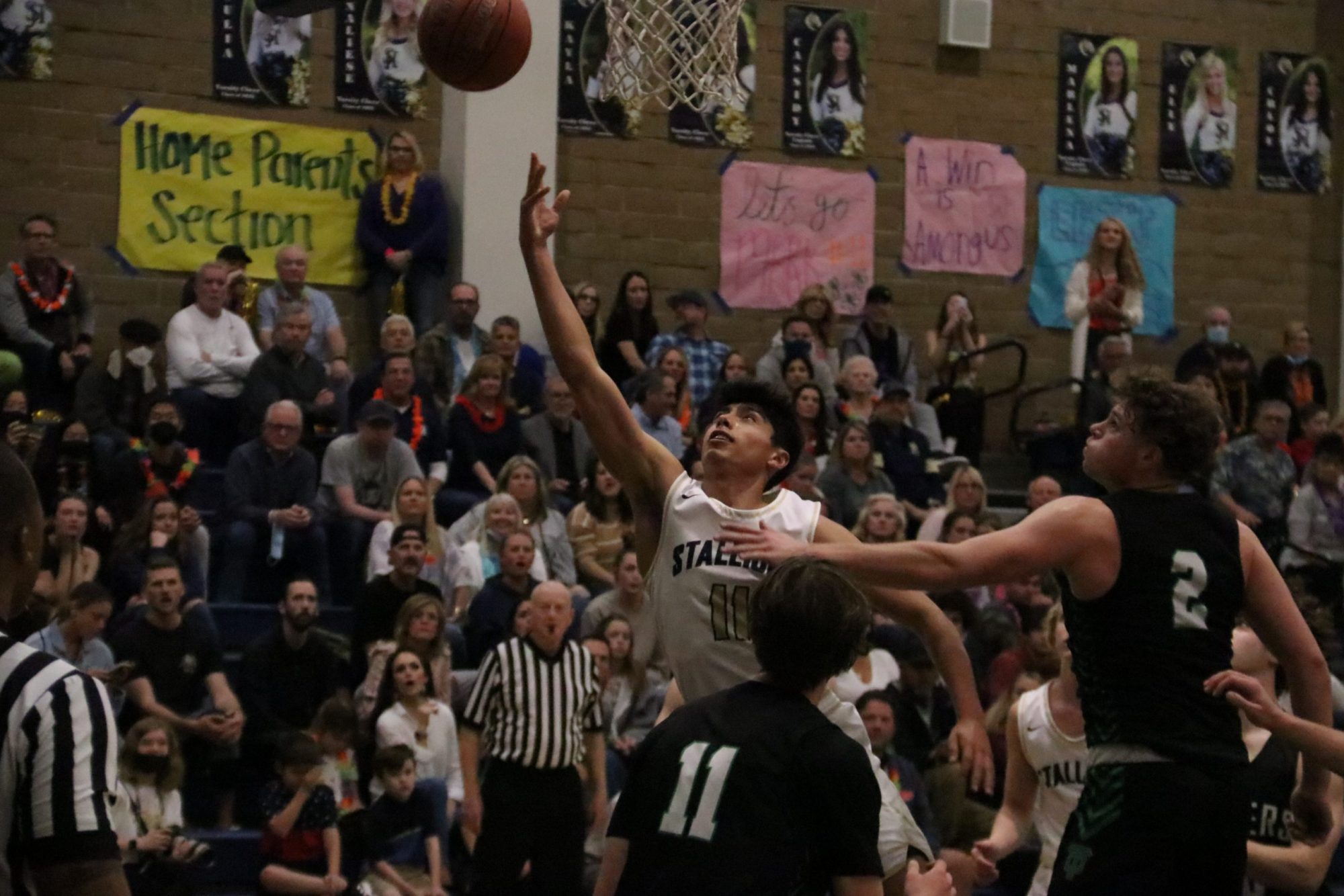 SAN JUAN CAPISTRANO – San Juan Hills boys basketball has more than lived up to its billing as No. 1 seed through the early rounds of the playoffs, and in doing so, the Stallions have continued on a historic path.

San Juan Hills (25-4) now advances to its first CIF-SS semifinal in school history and will host St. Paul of Santa Fe Springs on Tuesday, Feb. 22. The Stallions also clinched a berth in the CIF State playoffs for the first time with the semifinal appearance.

“Honestly it makes it feel like all the hard work is worth it and that we’re getting to where we have been planning for,” San Juan Hills coach Jason Efstathiou said. “I’m just very fortunate we have some good players. I’m very fortunate I have a great coaching staff and we’re putting it all together.”

The Stallions won their first league championship in program history last season and repeated as Sea View League champions this season. San Juan Hills earned the No. 1 seed in Division 2A and a first-round bye. The Stallions beat Aquinas, 78-54, in the second round.

“We’ve all known each other for so long and we’re just trying to leave a legacy,” San Juan Hills senior Mark Reichner said. “We’ve been working super hard together and it’s paying off.”

San Juan Hills fired on all cylinders right from the opening tip on Friday.

The Stallions’ defense forced 16 turnovers and knocked down nine 3-pointers in the game, with six in the first half. San Juan Hills never led by fewer than eight points after the midway point of the first quarter and led by double-digits for nearly the entire second half.

“Overall, for the majority of the game, we played pretty disciplined and pretty solid,” Efstathiou said. “They’ve been consistent. We’ve been doing this now for a few weeks.”

In the third quarter, San Juan Hills outscored Thousand Oaks, 20-10, with 14 points in the quarter from Reichner. Reichner hit two 3-pointers in the quarter, with the second giving the Stallions a 21-point lead into the fourth quarter.

The San Juan Hills student section was also ready to go on Friday, even before the opening tip.

When the recording of the national anthem wouldn’t start, the Stallions students led the charge and belted out the Star-Spangled Banner themselves. From there, they were nothing but electric. The students exploded for nearly every San Juan Hills play, but especially on the three-pointers. Their energy had a noticeable effect on the game.

“I think it’s the biggest crowd we’ve gotten, maybe in school history,” McFadden said. “It’s fun to play in front of them.”

Thanks to the luck of the coin flips, San Juan Hills gets to continue this playoff run at home for the third consecutive game. It’ll be just another chance at history for the Stallions, and another chance to celebrate this historic run with a boisterous home crowd.