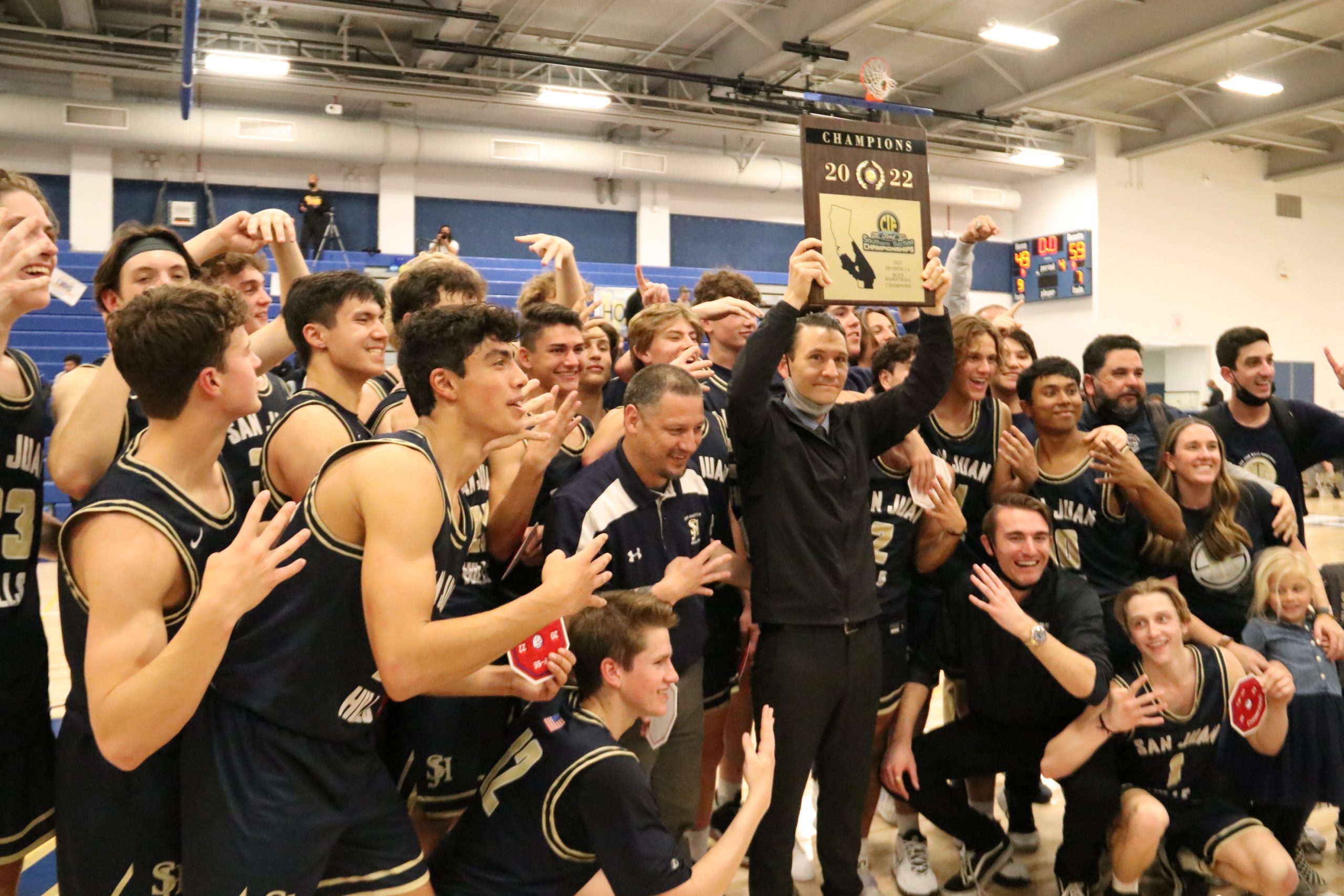 LA MIRADA – Friday night was the culmination of a long journey for the San Juan Hills boys basketball team and coach Jason Efstathiou.

In the summer of 2019, Efstathiou was bed-ridden, barely able to move as he battled a rare form of neuropathy. The seniors on the current Stallions roster were freshmen when their coach first became sick.

Efstathiou returned to the sidelines sitting on a stool in 2020. In 2021, San Juan Hills won its first league championship.

In 2022, the Stallions repeated as league champions, advanced to their first quarterfinal, first semifinal and first CIF-SS Final. On Friday, Feb. 25, Efstathiou stood tall and raised a golden plaque over his head, as San Juan Hills became CIF-SS champions.

The Stallions charged back from a slow start to dominate the final three quarters, defeat host La Mirada, 59-49, and capture the program’s first CIF-SS title in the Division 2A Final at La Mirada High School.

“Unbelievable,” Efstathiou said, surrounded by his children and wife. “Outside of these three (my kids), probably the next best feeling.”

“Two years ago, I was almost dead, right?” Efstathiou continued. “For me, just coming back from being bed-ridden to doing this, it’s just… it’s inspiring. I have a lot to thank my wife and kids for. I was just separated from the program, and to get things back on that climb. These guys were all part of it.”

San Juan Hills (27-4) has blown away the program record for most wins in a season (16 in 2009) in Efstathiou’s seventh season at the helm. The previous high under him was 14 wins. The Stallions have also improved their league record each of the four years this team’s seniors have been with the program, including San Juan Hills’ two leading scorers and four-year varsity players: John McFadden and Mark Reichner.

“They’ve done a phenomenal job, and I’m so appreciative of them,” Efstathiou said of his senior class. “They inspire me. I told them today, we all put in this time, but you guys also inspire me to try and bring my best.”

San Juan Hills trailed La Mirada (18-14) by as many as 10 points in the first quarter, and the Stallions were outrebounded 6-1 in the opening frame.

McFadden turned it on in the second quarter with 12 points, including two 3-pointers and a coast-to-coast lay-up. With a block on one end and a 3-pointer on the other, senior Jake Simon kickstarted a 12-0 run that put San Juan Hills ahead, 27-24. The Stallions held a 27-26 lead going into halftime.

“That’s the clutch gene right there,” McFadden said. “I saw that my team was down, and I said there was no way we’re losing our first ring. I just had to pull something out from inside me, and that’s what I did.”

The Stallions outscored the Matadores 16-5 in the third quarter, including another 12-0 run that began with another momentum-swinging 3-pointer from Simon, for a 43-31 lead going into the fourth. San Juan Hills kept La Mirada at bay in the fourth quarter to seal the game, 59-49, and clinch the program’s first section championship.

San Juan Hills outrebounded La Mirada in the second half, 12-6, and knocked down eight 3-pointers in the game, four in each half.

McFadden and Reichner have seen the whole journey for this San Juan Hills program and Efstathiou’s battle first-hand, which made Friday’s title celebration all the sweeter.

“Coach E is the most dedicated coach out there,” McFadden said. “He does so much for us. Every hour of the day, he’s working for this team. He’s probably the best coach I’ve ever had in my life.”

The celebration can only last through the weekend in the immediate time. The CIF State Regional brackets will be released on Sunday, and the Stallions are likely to host a home game.

While it will be back to the grind on Monday, San Juan Hills can celebrate this championship forever, as the first Stallions team to reach the mountaintop.