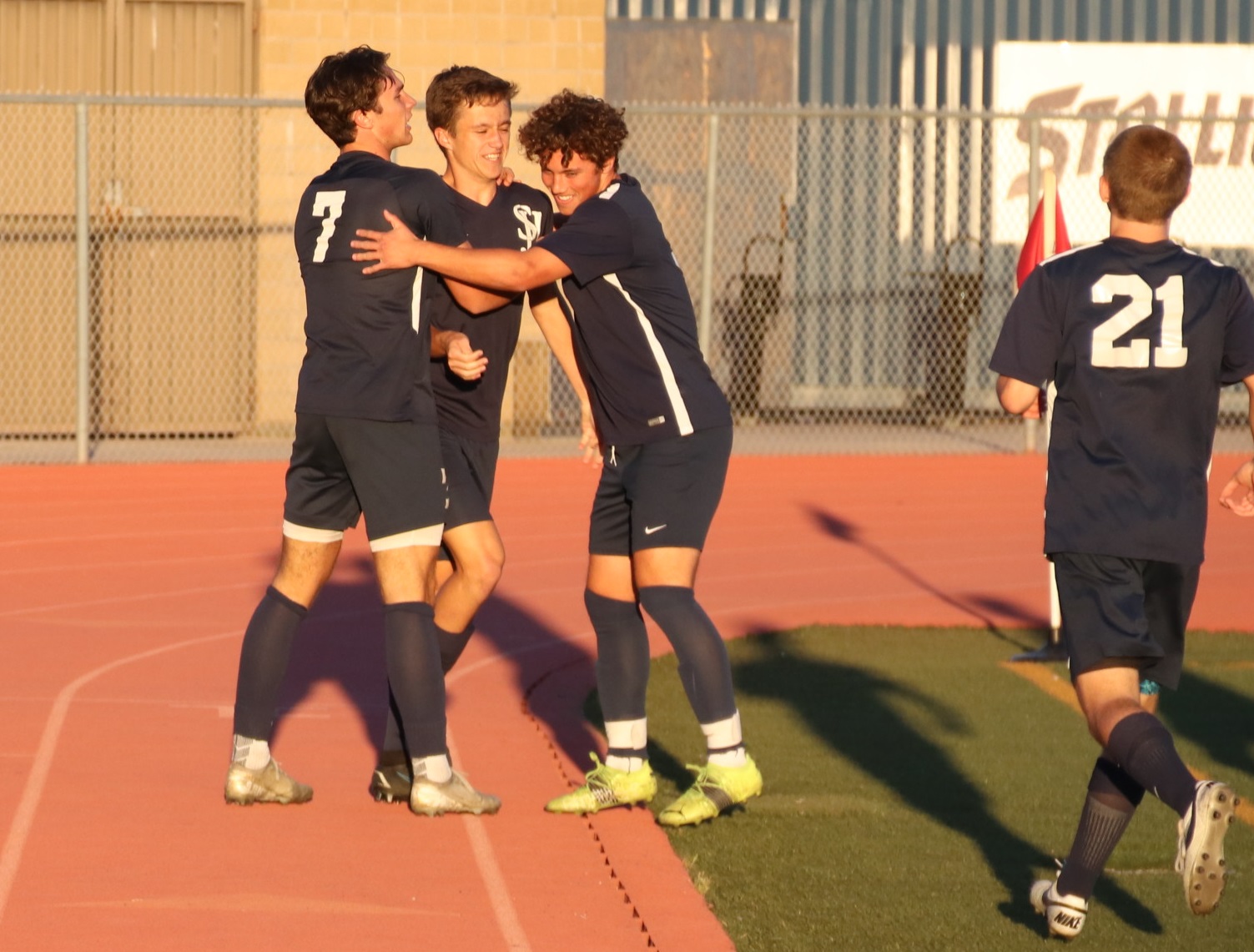 SAN JUAN CAPISTRANO – The San Juan Hills boys soccer team has been on a string of first.

The Stallions captured their first South Coast League championship in school history this season, which gave the Stallions the opportunity for their first-ever home playoff game in program history. So, it only made sense that a first-minute goal would lead San Juan Hills to its first CIF-SS playoff win on Friday, Feb. 11.

It only took 25 seconds for senior Cole Monach to charge up the right side and find senior Tyler Petersen in the middle for the San Juan Hills goal, and it was the only offense the Stallions would need in a 1-0 win over visiting Beckman in a CIF-SS Division 2 first-round game at San Juan Hills High School.

San Juan Hills (8-2-6) moves on to the second round, where the Stallions will travel to Hart of Newhall on Tuesday, Feb. 15.

San Juan Hills is brimming with confidence with an unbeaten run of nine consecutive games, after going unbeaten (4-0-4) on their run to the South Coast League title. The Stallions were considerably more dangerous throughout the game than Beckman, but as has been an issue for San Juan Hills, the Stallions were unable to produce more than the one goal in the game’s remaining 79 minutes.

“I think that’s the story of the whole season,” Ozuna said. “They (the other team) might be on us, trying to get in our box, midfielder attacking us, but when it comes to clear opportunities, I think we’ve been able to create in the majority of the games we’ve played.”

Beckman (8-12-3) eventually game with that kind of opposing push Ozuna described, but again as has been the case for San Juan Hills, the Stallions were stingy defensively. Monach credited the team’s defensive effort to the team’s “rock” at center back, senior Alex Avila, and the sharp efforts in net of senior keeper Anthony Majorino.

San Juan Hills got out of its own head in the first minute with quick instincts. The Stallions won the ball off of Beckman’s opening kick, and then Monach carried it most of the way down the right side to create the opening opportunity.

“Start of the game, I just had to run at them to see what they’re made of,” Monach said. “I tried to take a touch inside. Tyler (Petersen) was there to finish. We didn’t have the finishing the rest of the game, but Tyler scored, so we came through.”

Petersen jumped on the ball and struck the shot to the bottom left corner to beat the diving keeper from about 25 yards out.

San Juan Hills kept up its pace, but the Stallions only got two more shots directly on goal. However, both were strong opportunities.

In the ninth minute, Caden Berry rifled a shot to the bottom right corner, but a diving effort from the Beckman keeper denied the scoring chance. It was such an effort, that the Beckman keeper seemingly injured his shoulder on the dive. He remained in the game.

In the 74th minute, it was another Monach sprint that nearly set up the game-ender. Again down the right, Monach out-raced his defender to the corner and sent in a cross. Petersen was again on the other end and deflected the shot to the near post, but Beckman’s keeper was sharp enough to react and keep San Juan Hills out.

Offensively, Beckman earned its fair number of corners, but nothing could come of it. The Patriots had just one truly dangerous chance on a corner in the 62nd minute. The right-side corner swung into the box and went off two Beckman headers. Majorino had to leap up and to his left to stab away the ball before it could hit the top corner.

In Beckman’s late push, the Patriots sideline erupted when there was contact in the attacking box in the 77th minute. The Beckman attacker hit the ground, which left the Patriots coaches and players yelling for a foul and a potential penalty shot. It wasn’t awarded, and San Juan Hills shut it down from there.