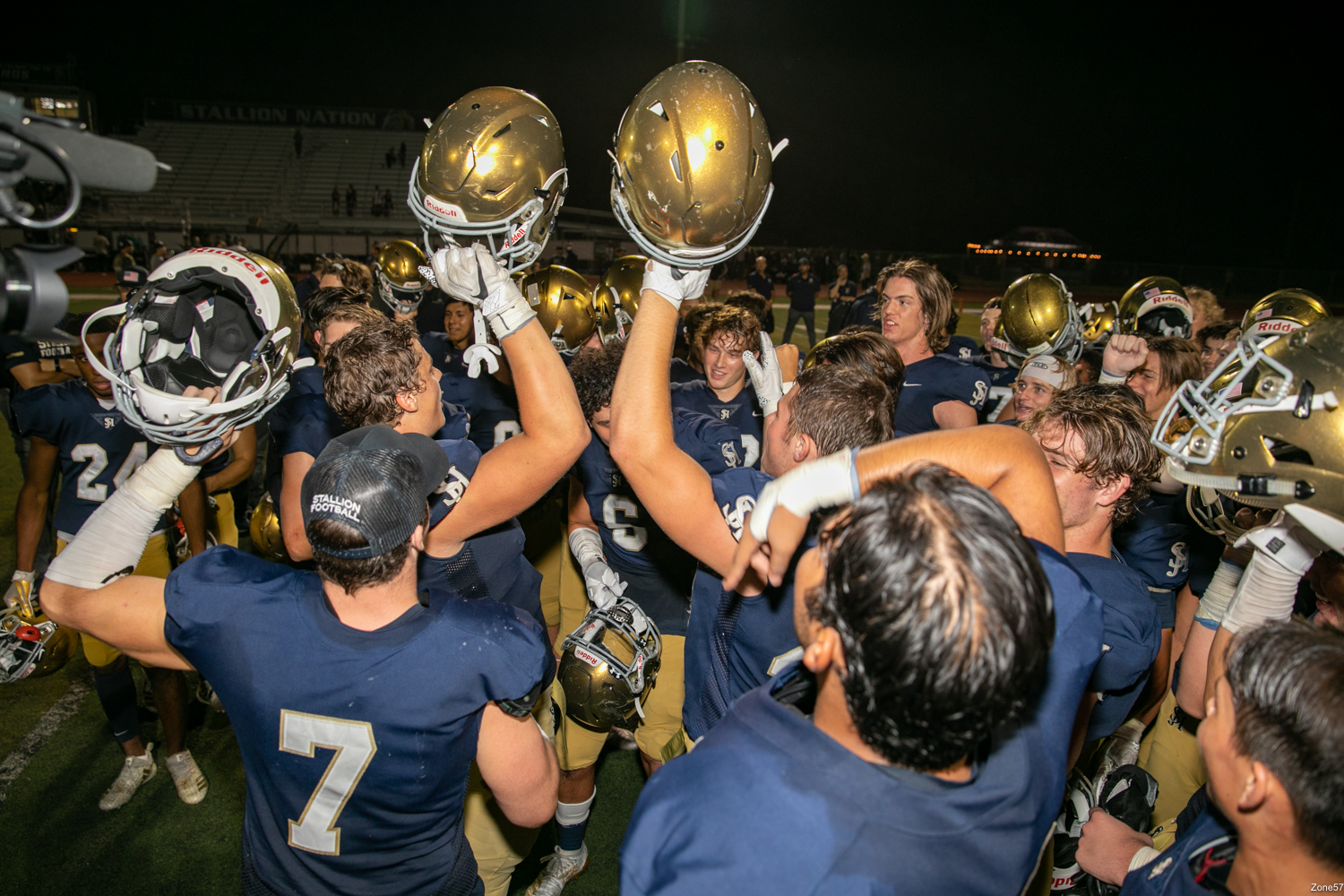 ALISO VIEJO – On paper, Aliso Niguel was tabbed as the biggest challenge to San Juan Hills in the Sea View League last season and this season.

On the field, the Stallions have met that challenge and then some to be the class of the league.

San Juan Hills controlled all aspects of the game and nearly shut out Aliso Niguel for a second consecutive season to earn the Sea View League victory, 35-7, on Friday at Aliso Niguel High School.

FINAL: San Juan Hills 35, Aliso Niguel 7. Stallions on top of the Sea View League, in line to repeat as champions. SJH (5-3, 2-0), AN (5-2, 0-1). Players not shaking hands and coaches having a discussion. @sjhhsboosters @sjhhsfootball @sjhhsathletics @CapoDispatch pic.twitter.com/Ye2bmZL1T0

“We flew around,” Frith said. “It was good getting a few starters back. All defenses want the shutout, but I’m happy with how they played.”

The Stallions leaned on their run game early with all five plays on their opening scoring drive being hand-offs to Austin Hogan, including an 11-yard touchdown run.

Hogan also carried the ball nine times on San Juan Hills’ next scoring drive, a 15-play march, that ended with another Hogan touchdown, a 1-yard run.

“Austin Hogan is a very good tailback,” Frith said. “That’s been our focus, get the game going on the ground, and hopefully it opens some passing lanes for us.”

Hogan carried the ball 24 times for 122 yards and two touchdowns.

San Juan Hills standout Joey Hobert didn’t even touch the ball on offense until the final two minutes of the first half.

Hobert, a Washington State commit, and quarterback Hudson Jones connected on three straight passes of 11, 48 and 20 yards, with the last play being an incredible leaping catch by Hobert for the touchdown and a 21-0 lead going into halftime.

In the third quarter, Jones hit Hobert on a 37-yard catch-and-run up the Aliso Niguel sideline to set up a 13-yard touchdown pass to James Gaines for a 28-0 lead.

Jones and Hobert connected on another score in the fourth quarter, a 27-yard touchdown pass for a 35-0 lead.

Aliso Niguel scored on a 10-yard touchdown pass by Kyle Kyckelhahn with 2:38 remaining in the game. Kyckelhahn completed 14 of 25 passes for 136 yards and a touchdown.

Emotions in the game ran high into the fourth quarter. Flags began to pile up against Aliso Niguel, and the frustration was evident.

The players of both teams did not meet at midfield for the traditional postgame handshakes. Frith and Aliso Niguel coach Kurt Westling made the decision together during the fourth quarter.

“It was mutual,” Frith said. “Kurt and I thought it would be in the best interest for the kids. Coaches would talk, and we’d keep the kids separate.”