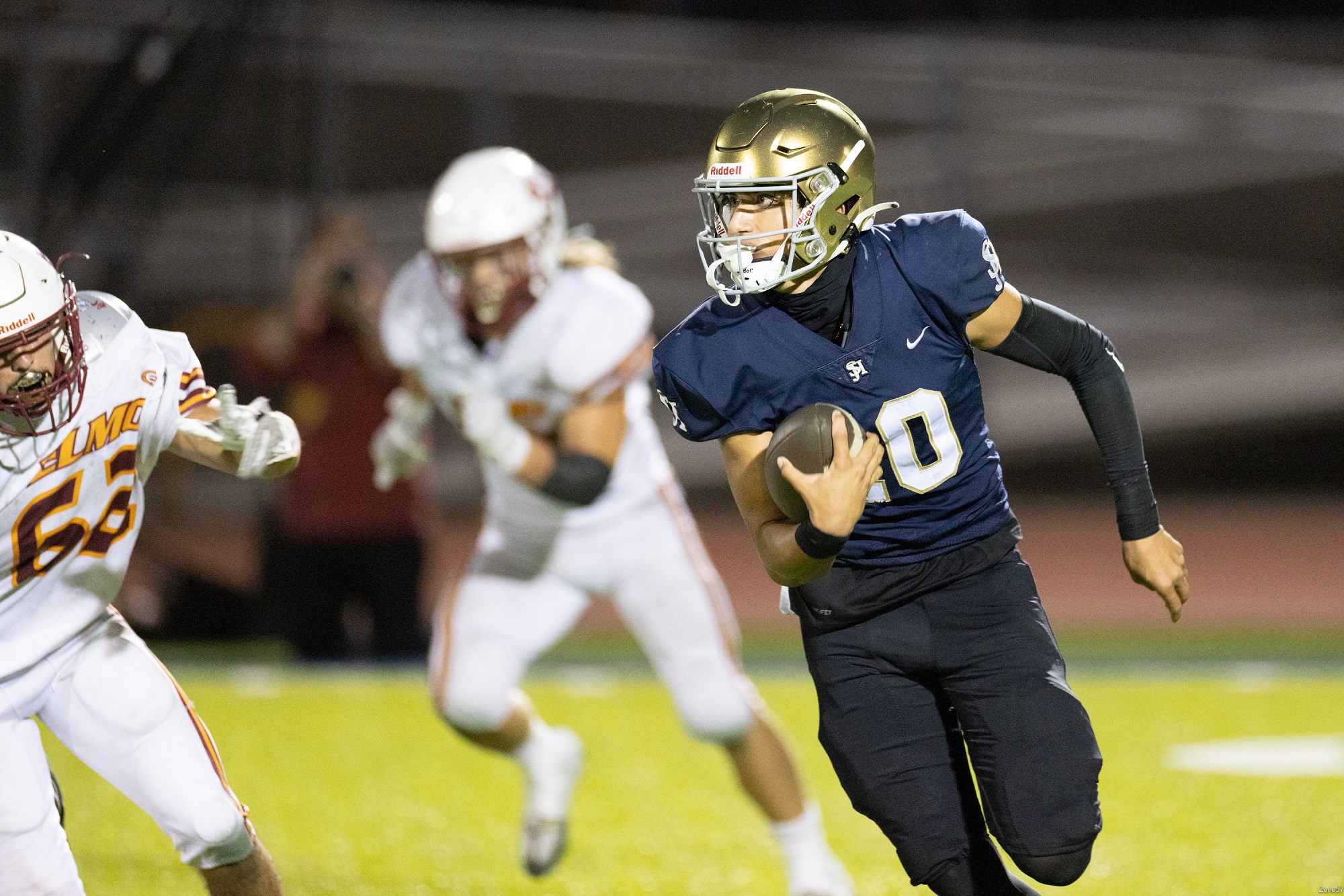 MISSION VIEJO – The old adage of being able to take the run game on the road proved true Friday night, Oct. 21, as San Juan Hills bled the clock and amassed 247 rushing yards in a 34-17 Sea View League victory over Trabuco Hills.

Sophomore quarterback Butter Tollefson displayed his mobility in the pocket, as well as on run plays, to the tune of 21 carries for 131 yards and a touchdown as he totaled 244 yards on the night. His partner in the backfield, Sullivan Land, helped the cause with 96 yards and two scores on 18 rushes.

Technically, despite clinching a share of the league title, San Juan Hills hasn’t officially clinched a CIF-SS playoff berth yet.

If Aliso Niguel were to beat San Juan Hills and Trabuco Hills (6-2, 1-1) beats El Toro next Friday, there would be at three-way tie for the Sea View League title. A three-way tie would necessitate a coin flip to determine league playoff seeding, and if San Juan Hills fell to the third seed, the Stallions would be subjected to the at-large selection process and likely not make the playoffs with their sub-.500 record.

Stallions head coach Rob Frith said that the win meant a lot to his team, who struggled mightily against tough competition in its first seven games before rebounding for the Sea View League championship. San Juan Hills’ first seven opponents hold a combined 50-12 record after Friday’s action, including three 9-0 teams.

“They never ever gave up and never stopped believing in themselves as a team and in their teammates,” he said. “…So, to come into league and have the showing we have had the last  two weeks, it says a lot about our team.”

It was a mostly complementary performance on Friday that met all expectations for Frith.

Save for a couple of huge special teams returns, the Mustangs couldn’t convert their drives into points, as Trabuco Hills played without starting senior quarterback Will Burns.

“Our whole thing was, we wanted to be more physical, and our guys came out there and did that,” Frith said. “We challenge our guys up front, the offensive line, to get out there and impose their will.”

A 14-yard completion from Tollefson to Christopher Williams and several chunk runs from the stud signal-caller keyed San Juan Hills’ impressive opening drive. Land punched the ball in from one yard out for his first touchdown of the day to give the Stallions a 7-0 lead.

After Trabuco Hills’ ensuing drive stalled out for a field goal, good runs and another Tollefson-to-Williams connection kept San Juan Hills in rhythm to open the second quarter, finished off by Briggs Marquis’ 5-yard touchdown run to push the lead to 11.

Trabuco Hills responded with a lengthy drive that saw it at the Stallion 2-yard-line, but an offensive personal foul ended up costly.

The Stallions blocked a field goal to end that possession, and Ben Garcia later kicked a 23-yard attempt that made the halftime score 17-3.

San Juan Hills grabbed more momentum in the second half after a fourth-down defensive stop and a 25-yard run from Tollefson, as the quarterback wiggled his way into the end zone two plays later.

However, Mustang free safety Ben Holland returned the next kickoff 93 yards, and Taylor Bowie ran it in for a one-yard touchdown to keep the score within 14.

A 38-yard punt return in the fourth set up Bowie for a six-yard score to inch Trabuco Hills to a 27-17 deficit with 5:50 left. The Stallions responded by efficiently running off precious seconds, capped by a 26-yard touchdown run from Land to ice the game.

Bowie paced the Mustangs with 139 yards on 26 carries.

San Juan Hills defensive coordinator Pete Silvey received a shoutout from Frith for preparing well and getting his players to buy in. The Stallions limited the Mustangs to 67 passing yards and allowed only three third down conversions out of 11 attempts.