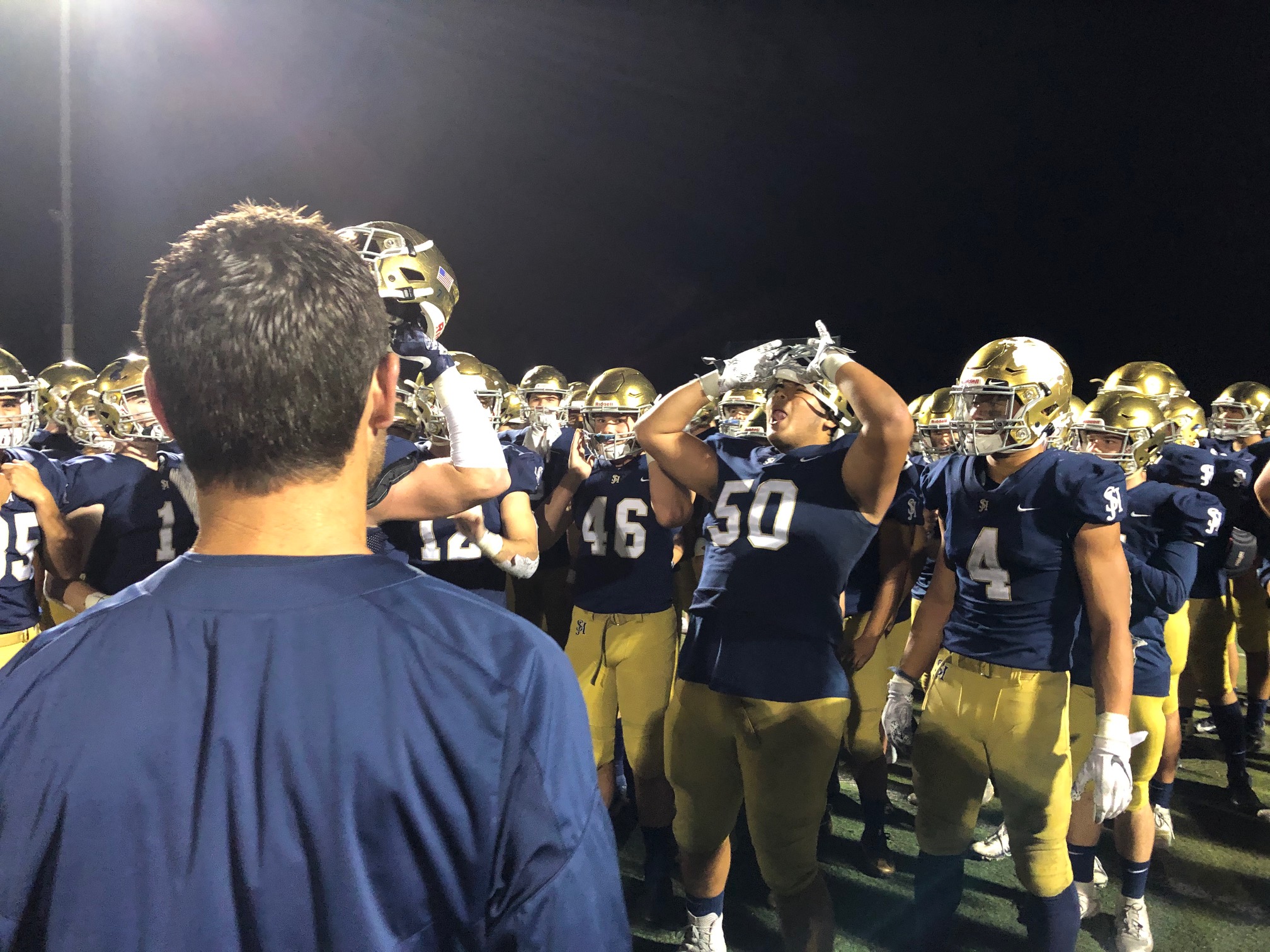 SAN JUAN CAPISTRANO – On paper, a first-round home game for a seeded team against a sub-.500 team should be a walk in the park.

However, CIF-SS Division 4 No. 4 seed San Juan Hills was locked in a battle with three-win Murrieta Mesa on Friday night. Down at halftime, the Stallions’ senior leaders came out hard to flip the game and ensure that their high school careers weren’t over yet.

“It wasn’t about making a lot of adjustments,” San Juan Hills coach Rob Frith said. “It was about showing some heart. They showed a tremendous amount of heart and courage in the second half. They haven’t been down for a long time. We got punched in the mouth a little bit, and at halftime, our kids decided it wasn’t going to happen. Not on our turf.”

San Juan Hills (8-3) moves on to host Hart of Newhall (7-4) in the second round next Friday, Nov. 15. Hart defeated Chaparral, 34-23, on Friday. Chaparral finished ahead of Murrieta Mesa (3-8) in the Southwestern League, but Murrieta Mesa beat Chaparral, 41-29.

The Stallions rode Hogan all night to the tune of 37 carries for 170 yards and a touchdown. The hard work of Hogan’s night was evident by the large amount of San Juan Hills’ shiny golden paint knocked off of his helmet.

“It feels great,” Hogan said of his night. “Knowing you did everything you can to win the game and move on to the next round, it’s amazing.”

Trailing Murrieta Mesa by three points at halftime, San Juan Hills came out and relied on Hobert and Hogan on a 12-play drive. The Stallions went back ahead on a 25-yard touchdown pass over the middle from Jones to Hobert.

The Stallions held Murrieta Mesa to a three-and-out on the next drive, and after a short punt, San Juan Hills got right back to work at the Rams’ 39-yard line.

It was Hobert and Hogan again on the ground before Jones tossed a shovel pass to James Gaines for a 3-yard score and an 11-point lead.

Murrieta Mesa responded with a 56-yard play that Hobert forced out at the 1-yard line, and the Rams pulled back within three points on a 1-yard touchdown run and two-point conversion,

On the touchdown, Hobert went down for the Stallions, but the Washington State commit was able to walk off on his own power. Hobert didn’t return to the game and kept ice on his neck. After the game, Hobert said he’d be fine and would be available next week.

Hogan ran the ball eight times on the ensuing 12-play drive for the Stallions. San Juan Hills scored on a 10-yard pass from Jones to senior Bryce Crider for a 10-point lead.

Murrieta Mesa threatened with another long drive, but Henry Vangelos intercepted the Rams at their 9-yard line and ran back a 63-yard return.

Murrieta Mesa tacked on a field goal with 47 second remaining, and San Juan Hills recovered the onside kick to close the game.

San Juan Hills came out hard to open the game with back-to-back 20 yard carries by Hogan on the Stallions’ first two plays. After a 50-yard touchdown pass was called back for holding, Jones hit Hobert on a rainbow for a 39-yard TD pass. San Juan Hills scored the two-point conversion for an 8-0 lead.

Murrieta Mesa responded immediately with an 89-yard kickoff-return touchdown up the Rams sideline.

San Juan Hills drove into Murrieta Mesa territory again, but the Rams intercepted a pass at the 5-yard line.

Murrieta Mesa took the lead in the second quarter on a 45-yard touchdown pass, 14-8.

San Juan Hills grabbed points at the end of the half on a 34-yard field goal by Kyler Isaoglu.