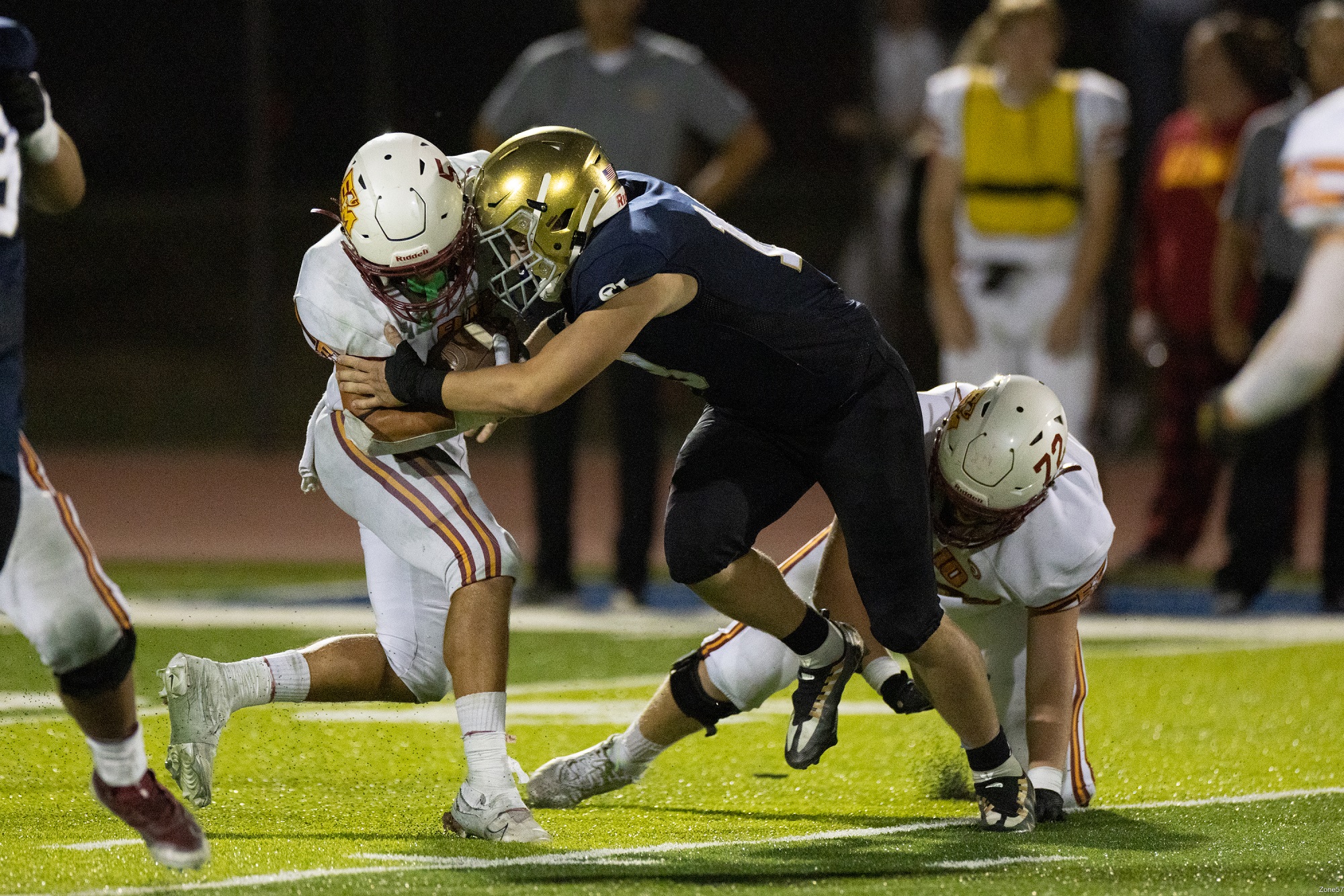 LAS FLORES — The bell tolled once again for San Juan Hills on Friday night, as the Stallions’ search for that elusive victory marched on.

Tesoro stopped San Juan Hills on fourth down five times and leaned on running back Travis Wood for 232 yards and three touchdowns on 33 carries to reclaim the Battle for the Bell, 30-15, and keep the Stallions winless on Friday, Sept. 30 at Tesoro High School.

“We’re 0-7 on the year. We’re going into a bye week, and then we’ll be 0-0 again in league play,” San Juan Hills coach Rob Frith said. “All this pre-league stuff is important. It’s really important. I know our guys wanted to win this game. At the end of the day, this is pre-league. League is for championships, and league is for playoff implications.”

The Stallions ran 20 more plays than Tesoro (4-2) in the first half, but San Juan Hills could only manage one score – a 1-yard run by Michael “Butter” Tollefson to cap a 12-play drive tie the score going into halftime, 7-7.

San Juan Hills was stopped twice on fourth down in the first quarter alone, and after an interception of Tesoro by Rylan Schafer, the Stallions fumbled the ball on the two-yard line, which Wood took advantage of to put Tesoro ahead.

San Juan Hills’ defense held Tesoro to just 84 yards of offense in the first half, and while the Stallions actually gained more on the ground in the first half than the Titans, it was the physical Tesoro running attack that set the pace for the second half.

San Juan Hills responded with an 11-play drive, but again, the Stallions were stopped on another fourth down, a 4th-and-2, just before the end of the quarter.

“Second half, they won in the trenches,” Frith said. “I said earlier that the team that does the better job in the trenches is going to win the game. During this football game, we had a couple times to get a first down in the red zone, on a fourth down, and they stuffed us. They stuffed us both times.”

Tesoro went up by two scores with a 37-yard field goal on the ensuing drive, and after San Juan Hills was forced 3-and-out once more, Wood powered up the middle and burst free for a 62-yard touchdown run that effectively iced the game with just over five minutes remaining.

A pass interference and a personal foul helped San Juan Hills down the field on their next drive, and the Stallions got a score back with a 24-yard touchdown pass from Tollefson to newly eligible transfer receiver Christopher Williams.

The Stallions forced their own 3-and-out of Tesoro with a huge third-down tackle-for-loss by Jake Javorsky, but San Juan Hills was denied on four straight passes for another turnover-on-downs.

Wood put the nail in the Stallions coffin with a 45-yard touchdown run on the very next play for the 30-15 lead.

Tesoro reclaimed the rivalry bell for the third time in four games since its inception in 2019. San Juan Hills won the bell last season. Tesoro is now 6-3 all time against San Juan Hills.

O’Bryne, in his first game eligible for Tesoro, completed 5 of 13 passes for 65 yards, a touchdown and two interceptions.