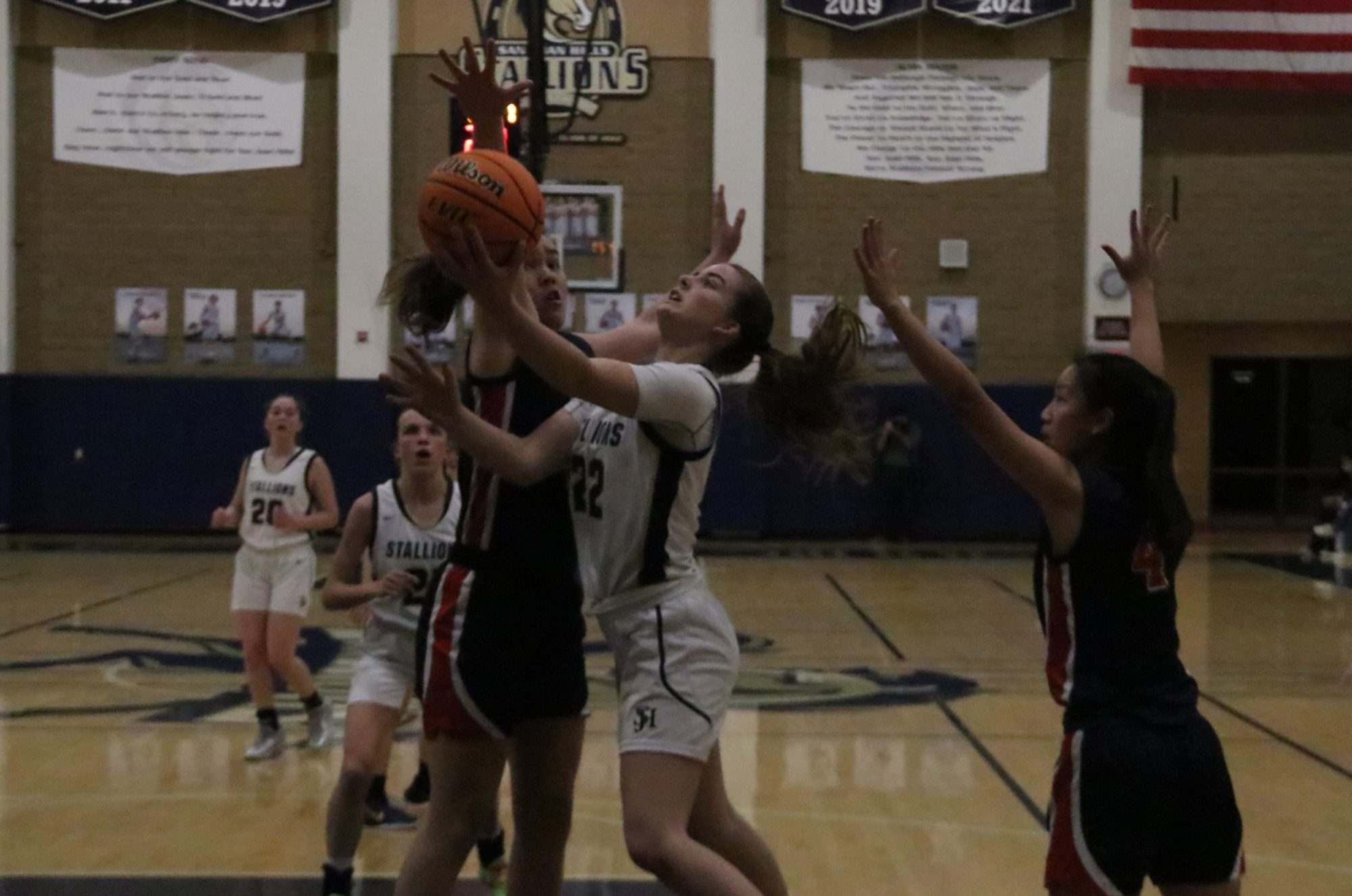 Going into the first overtime period, it was the Stallions that felt like they rode that momentous wave to victory. San Juan Hills held Beckman scoreless in the fourth quarter and overcame a nine-point deficit to force the extra session.

Going into the second overtime, the script had flipped, as Beckman nailed a buzzer-beating 3-pointer. Unfortunately for San Juan Hills, it was Beckman that ultimately capitalized on that wave of momentum.

“We’re the team that forced the overtime, so obviously we had a lot of energy,” Edwards said. “Second overtime, look, the girls rallied. I don’t think that’s the issue, but obviously, when you think you have it won and you give up the three at the buzzer, that’s tough.”

Now, San Juan Hills has experienced a too-early harsh ending to their season, which will only light a fire to further its goals next season.

“Now we take this as a springboard,” Edwards said. “This isn’t going to feel good for a little while. We take a little time off to let them breathe, and then we’re right back into it. This is going to motivate us.”

As it did in the overtimes, the game flipped multiple times on Saturday night.

In the first quarter, San Juan Hills looked unstoppable and revved up a packed and raucous crowd in the Woodlands with an 11-0 run to cap a 16-3 opening frame.

Then, seemingly, the energy was zapped from the Stallions, as Beckman held San Juan Hills scoreless in the second quarter and surged on a 17-0 run. Beckman led at halftime, 20-16.

“We’re a team that hasn’t been in this environment,” Edwards said. “The crowd is bigger than we’ve ever had, which is awesome. We love the support. But there’s no doubt, even when we played so well the first quarter, I looked at them. Their faces were so red. They looked like they played a full game.”

Sisson broke the Stallions’ drought with an opening triple, but San Juan Hills still struggled coming out of halftime, as Beckman pushed out to a nine-point lead, 33-24.

Then, again on a dime, the game turned around back to an all-San Juan Hills pace. Beckman was held scoreless in the fourth quarter, as San Juan Hills went on a 9-0 run to tie the game with exactly two minutes remaining.

Neither team could find a bucket, so the game went into the extra session.

Beckman grabbed an early lead on a 3-pointer, but San Juan Hills immediately answered with a triple from Sisson for a two-point lead, 38-36.

San Juan Hills stayed just ahead on free throws for a 41-38 lead with 12 second to go. Then the Stallions implemented a strategy that it thought would end the game, but instead, it gave a window back in for Beckman.

Edwards had the Stallions intentionally foul twice, and then pulled back to play defense. San Juan Hills ultimately couldn’t deny the opportunity and Beckman nailed a straightaway three as the buzzer sounded to tie the game and go to double overtime.

“We had fouls to give, so we were going to foul until we were then in the bonus,” Edwards said.

“It’s an age old call. Do you foul them and put them on the free throw line up three, or do you play it out and defend the three? We thought we had a good strategy of playing it out and defending the three… It didn’t work out for us. They ran a down screen, and we just didn’t cover correct.”

In the second overtime, Beckman came out with pace and tightly defended San Juan Hills as the Stallions drove the lane. Beckman amassed a six-point lead, 49-43, but San Juan Hills got one last triple from junior Amanda Edwards to make it a three-point game.

From there, San Juan Hills would foul Beckman looked to get its extra opportunities. However, Beckman hit its first free throw to make it a two-shot game once more, and the Patriots continued their strong defensive play to deny the Stallions.

Beckman next hosts Crescenta Valley in the Division 2A second round on Wednesday, Feb. 16.