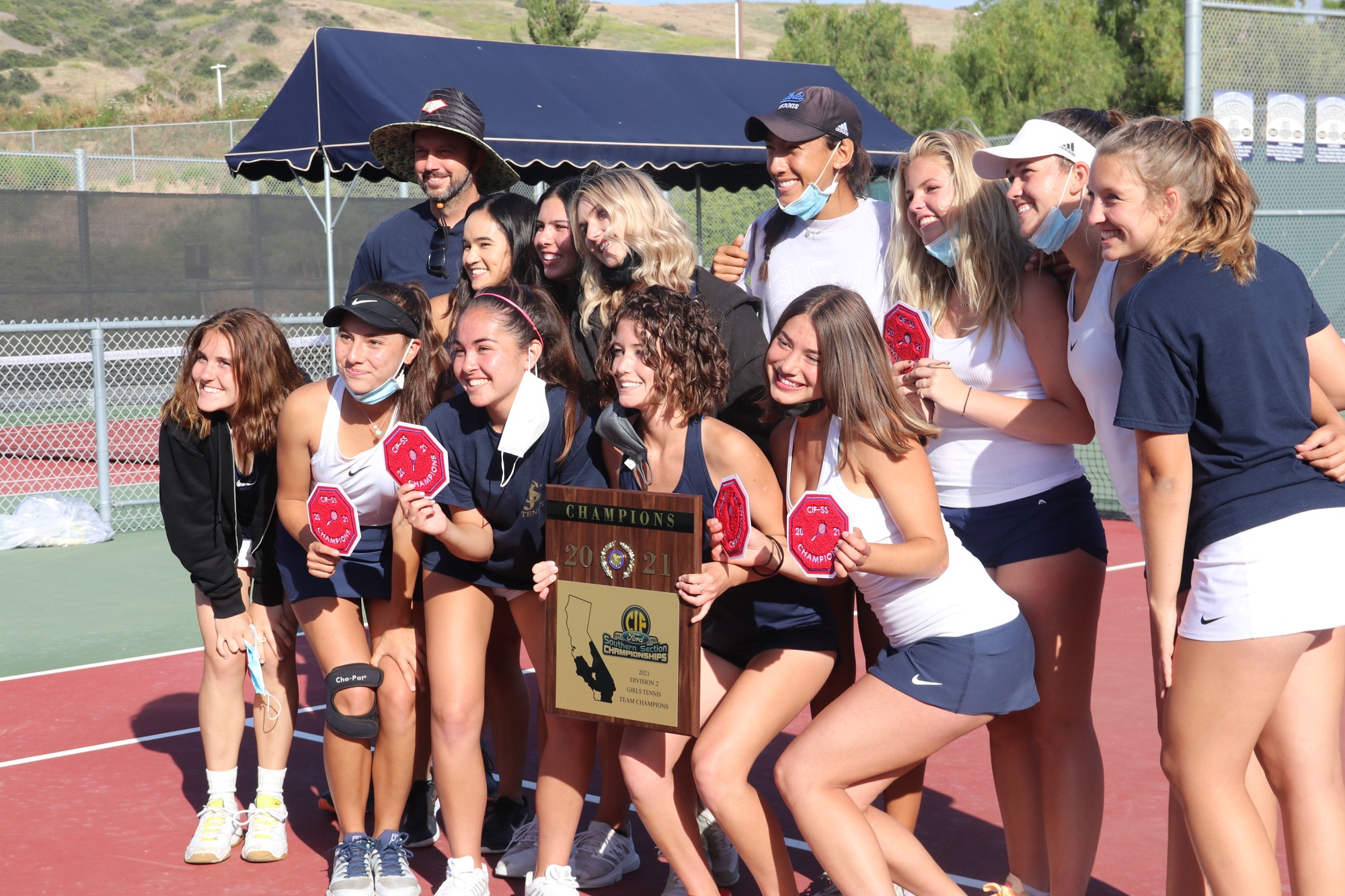 Whether its “iron sharpens iron” or “what doesn’t kill you makes you stronger,” there are a couple of old sayings that describe the journey of the San Juan Hills girls tennis team.

San Juan Hills took a 4-4 record and a third-place finish in the South Coast League and turned it into a CIF-SS Division 2 championship with an impressive playoff run capped by an upset of undefeated No. 1 seed Palm Desert, 12-6, on Friday, May 21.

It was a run that couldn’t have happened without the crucible of the South Coast League, according to Stallions coach Tim DiLeo.

“We spent the last two years in the Sea View League, which wasn’t paddy-cake tennis or anything,” DiLeo said, “but it was a little weaker, basic, easy matches. The only way a third-place team out of league wins a title like this because we have to go up against the likes of Dana Hills, Aliso Niguel, San Clemente, Tesoro. They’re all so tough. You take your losses.”

It was evident from the start of the Division 2 championship match that the team that took its losses in San Juan Hills (8-4) would hand Palm Desert (15-1) its first of the season.

San Juan Hills came out of the gates with a 5-1 lead after the first round of matches spurred on by No. 1 singles player Kaia Wolfe and a sweep of the doubles. The Stallions then went up 9-3 after the second round of matches, which meant San Juan Hills needed just one more victory to earn the program’s first CIF-SS title and the fourth in school athletics history.

Wolfe, who won the South Coast League singles title, didn’t make San Juan Hills wait long with a 6-1 win over Palm Desert’s No. 2 singles player to clinch the CIF-SS Division 2 team championship. Wolfe won all three of her matches on the day (6-3, 6-3, 6-1).

“I can’t even put it into words. It’s just so great,” Wolfe said. “We put in so much work throughout the year, and it’s just great to come out on top. We lost league, and we were all just kind of bummed. But we came into this fresh and ready to win it, and we did.”

On Wednesday, May 26, CIF-SS announced that Wolfe, a junior, was selected as a qualifier for the CIF-SS Girls Tennis Individual Tournament and was slotted into the Round of 16. The individual tournament begins on June 9 at the Seal Beach Tennis Center.

With Wolfe as the Stallions’ top player, DiLeo knew he could count on her for points. Where the title match swung completely in San Juan Hills’ favor was on the doubles side.

“In my mind, going over it the past two days, I thought it was going to be 7-5 after the second round and we’d really have to dig in the third round,” DiLeo said. “I did not expect our No. 1 doubles v. No. 1 doubles to be that convincing, and I did not expect our No. 2 v. No. 1 to be that convincing. Those were the two that were variables for me. You just win matches that way.”

San Juan Hills swept in the doubles in the first and second rounds of the title match, with No. 3 doubles team of junior Jenna Huff and senior Nadine Tong winning their first two matches.