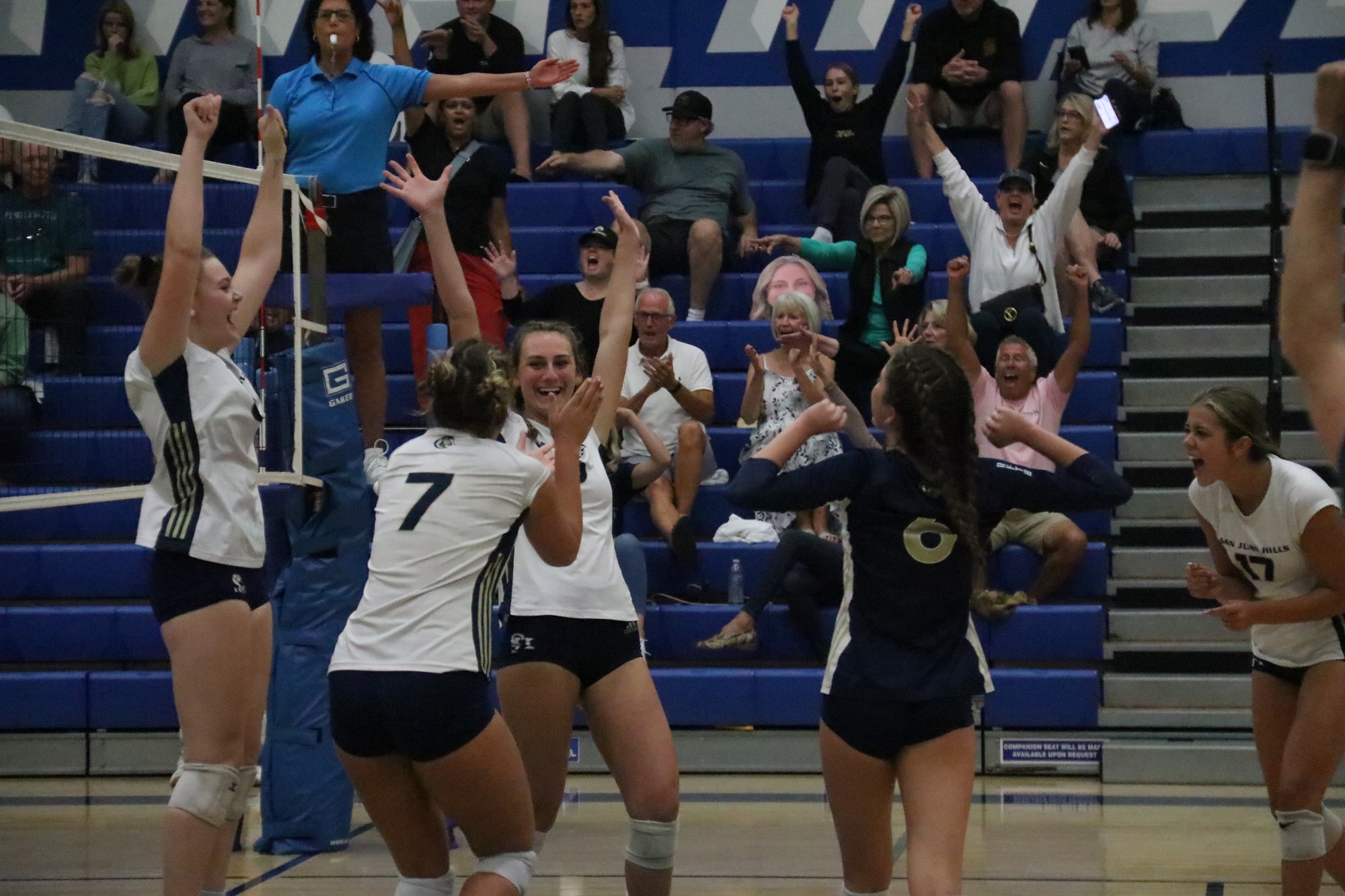 Now, the fate of the league title is completely in their hands.

If Aliso Niguel beats San Juan Hills, the Wolverines would win the league championship outright. San Juan Hills would finish either tied for second or in third place depending on the result of San Clemente-Tesoro.

All three will be going to the CIF-SS playoffs, and it’s possible all three will be in Division 2. The top eight teams of the combined Division 1/2 poll will be the Division 1 playoff field, and in the latest poll, Aliso Niguel was No. 9, San Clemente was No. 11 and San Juan Hills was among other teams outside the top 16 earning votes.

On Monday, Dana Hills didn’t make it easy for San Juan Hills to set up these final-day scenarios, despite the eventual sweep of the Stallions. San Juan Hills scrapped against the upset-minded Dolphins and put up an energetic performance with strong defensive effort all over the court.

“We played some of our best defense that we’ve played all season,” San Juan Hills coach Jessica Papell said. “Especially coming into someone else’s gym and bringing that energy, to be honest, that’s something that we’ve struggled with a different points of the season. Our gym, we always have that energy. Sometimes we go to other schools, and we don’t have that same fire.”

In the first set, Dana Hills actually took a pair of early leads, but after an 11-11 tie, San Juan Hills pushed ahead for good. The Dolphins got back within one point twice, but the Stallions closes on an 8-2 run to win the set, 25-18.

In the second set, San Juan Hills tried pulling away early, but Dana Hills would not be put away. The two teams battled at and above the net throughout the set, and Dana Hills eventually grabbed the momentum. The Dolphins looked poised to close out the set at 23-19, but the Stallions took a timeout and found their resolve.

San Juan Hills scored three straight points out of the timeout and then fought off a Dana Hills set point. The Stallions tied it at 24-24 and went up for their own set point, but once again, the Dolphins clawed back to tie the match, 25-25, and take their own one-point lead.

Sparked by an Alex Stone kill to tie it back up at 26-26, the Stallions got the next two points, including the clinching kill by Kyla Atheide, who fittingly dunked a Dana Hills mishit at the net for the win, 28-26.

“Something we talk about a lot is being resilient,” Papell said. “We talk a lot about bouncing back when things don’t go our way and to not let the previous play affect the next play. For them to keep focus and not get frustrated when the other team is scoring a lot of great points and especially winning a lot of those tight rallies, it’s huge. To come back and win that set was big for us.”

After the battles of the first two sets, San Juan Hills took the third set in a breeze. Two separate four-point runs put the Stallions up by five and by eight with a cruise to the end for the set and match win, 25-18.

San Juan Hills was led by stellar performances from its two outside hitters, the junior Stone and senior Lexi Presser. Stone, in particular, pitched in on the defensive side selling out for key digs and then launching up for several booming hits. Stone’s contact lets out an unmistakable “POW” when hand meets ball.

“She’s such an athletic kid and has one of the heaviest arms I’ve seen at the high school level,” Papell said of Stone. “When she’s hitting the ball, it’s a tough swing to defend because she hits it really hard and it comes on people really fast.”

San Juan Hills will need all that effort and more in its own gym with the South Coast League title on the line on Wednesday.