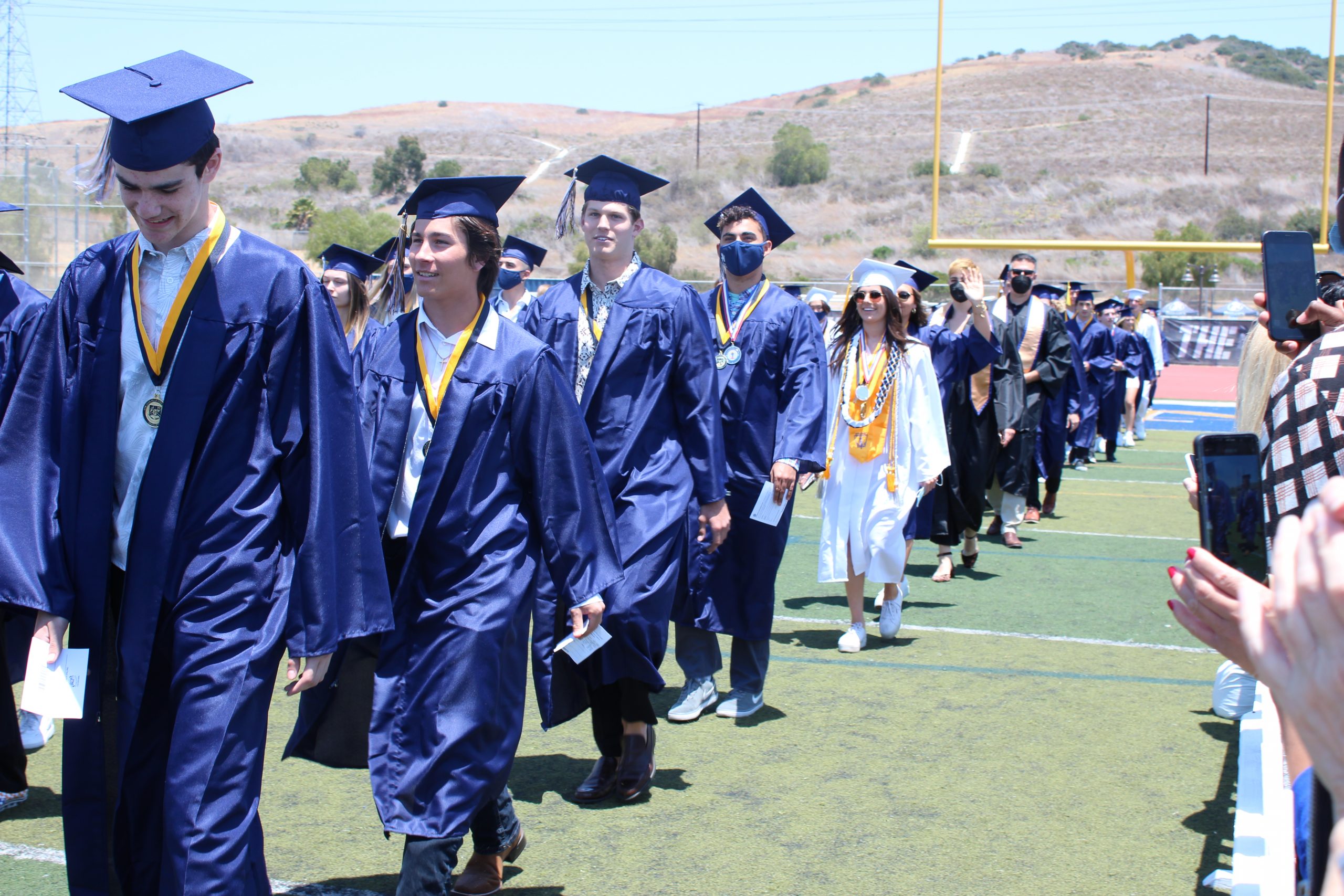 As Ryan Marin put it, the Class of 2021’s senior year represents the messy and unpredictable nature of the real world.

Marin made those remarks to his fellow graduates during a graduation ceremony at San Juan Hills High School on June 3. Reflecting on the COVID-19 pandemic and how his class navigated through it and other challenges during a commencement speech, Marin looked out into the faces of his classmates from the graduation stage since the ceremony returned to an in-person group format.

“Four hundred and forty-seven days of Zoom calls and Canvas assignments later, and here we are,” Marin said. “For most of us, getting here wasn’t easy—though as tough as this year was, it’s also tested our resilience.”

Marin said he is proud of everyone for graduating during the health crisis, and he encouraged his peers to do good things and continue riding for the brand.

Graduation was split into two ceremonies to accommodate crowd capacity limits, and masks were required for those in attendance. A drive-through senior celebration parade was held the day before graduation, along Camino Capistrano in San Juan Capistrano. The parade was also held last year, when the pandemic caused uncertainty on whether a graduation would happen.

The face-to-face graduation ceremony marked a return to tradition after last year’s graduation was a drive-through ceremony due to high COVID-19 metrics. The smiles on students’ faces as they walked out to the ceremony field, and jubilation during the traditional turning of the tassel, were clear signs everyone was thrilled to get back to some sort of normalcy.

Parents came out to celebrate, including Adrian LeBlanc, whose daughter, Kylie LeBlanc, graduated. He was happy to see the usual ceremony again, particularly after kids went through online learning.

“It was great to be able to get out and enjoy something like this. We weren’t sure it was going to happen,” LeBlanc said. “There was a lot of uncertainty, but they pulled it off really well. To be able to do this in this kind of venue and have all the people come out and be able to support their kids, it’s phenomenal.”

Principal Manoj Mahindrakar said graduation is a day that parents have been looking forward to for almost 18 years.

“Today is certainly about our graduates and what they have accomplished, but if raising our young ones takes a community, then we will certainly celebrate as a community,” Mahindrakar said. “Students, look out in the stands. All your loved ones are here—or at least four of them, because of the tickets and COVID. They’re here. Everything they’ve done to get you here, give them a round of applause.”

Mahindrakar thanked teachers and staff for not giving up during a “crazy year,” which also earned a round of applause. San Juan Hill’s sense of community stayed intact despite the virus taking so much, he said.

“Were we challenged? Yeah. Were we pushed? Absolutely,” Mahindrakar said. “Were we broken? Never. Through all the loss, sacrifice, dreams deferred, plans changed, our community led by our students was never broken. In fact, these students in front of you collectively rose.”

Mahindrakar further noted that students continued going to work, providing for their families, and helping their younger siblings get through school during the tumultuous year. The Class of 2021 proves humanity is alive and well, can do good things when faced with challenges, and brings endless value to the world, he said.

Graduate and commencement speaker Samantha Dragna said their junior year became monumental when the football team became the first in school history to be CIF champions.

“We as a graduating class will leave a legacy like no other—and, no, I am not talking about a legacy destined by a pandemic,” Dragna said. “The legacy we leave as the Class of 2021 is one of persistence. During the year to test all patience and then some, we have prevailed.”

Graduate Elizabeth Meshkin, the third commencement speaker, said they are a unique class. Everything “broke” at the height of their junior year, though the Class of 2021 never lost their purpose or relationships with the community and one another, she said.

“We became confined to our homes where those big screens became small, haunted reminders of all we had lost,” Meshkin said. “Our new normal has us less focused on screens and more focused on living a life without regret and with purpose.”

After the ceremony concluded, students and parents continued celebrating in the parking lot, taking pictures and hugging. Chris Picarella was one of the graduates enjoying the moment with loved ones that Thursday afternoon.

“It’s exhilarating. It feels real. This whole pandemic, a lot of things been feeling fake, but this feels real for sure,” he said of what a traditional graduation felt like. “There was a big moment of empathy. We all felt the same thing. We’re all ready to get done.”

As for his mood post-graduation?