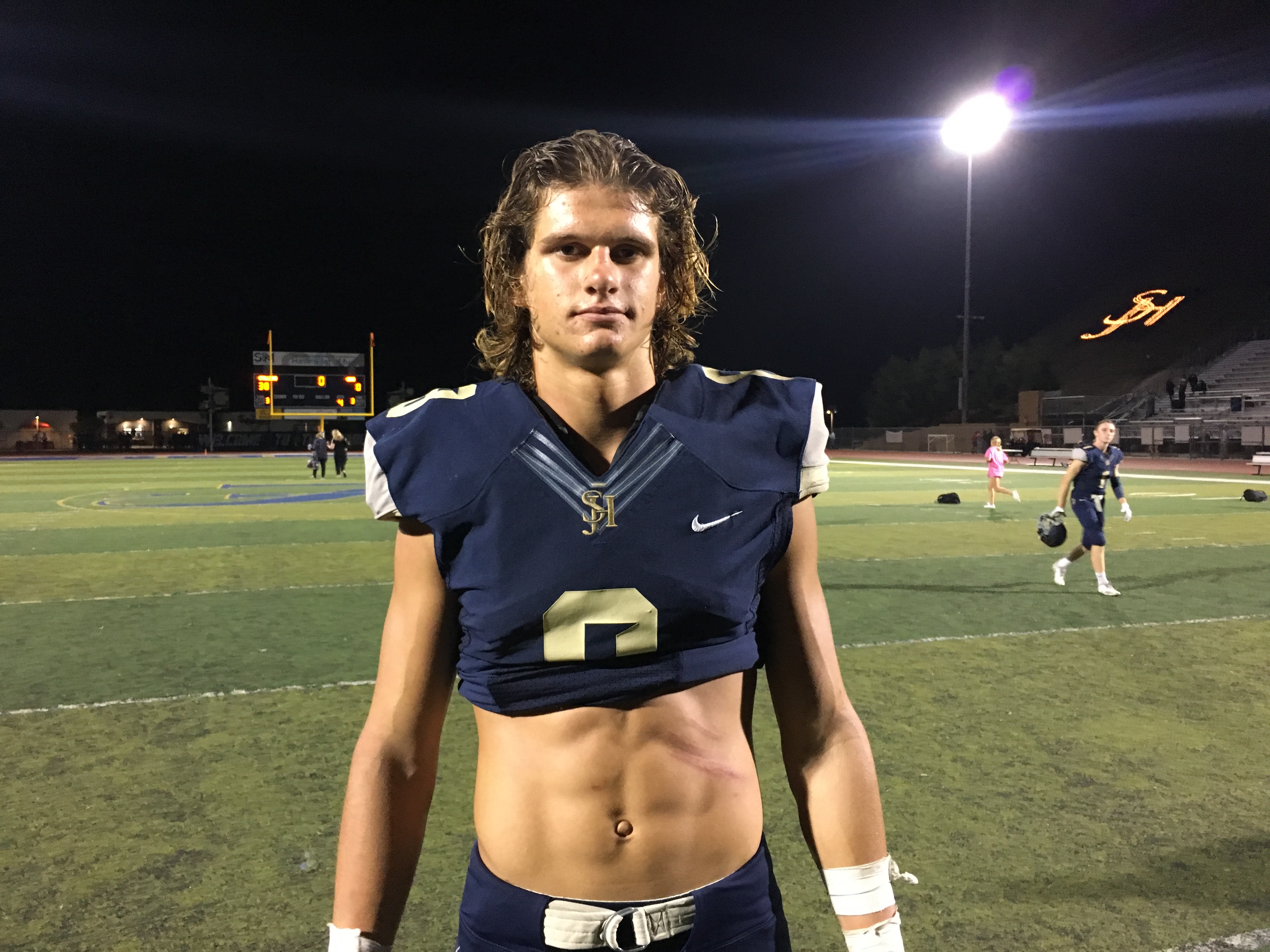 “We worked really hard this week,” Frith said. “We knew this team (Aliso Niguel) was undefeated. We knew they had some firepower offensively. I know that (Aliso Niguel) Coach (Kurt) Westling is very creative. We worked our tails off this week in all three phases of the game to put together an efficient game plan. The kids bought in, and tonight they executed.”

Shane Roberson also pulled in a sack for San Juan Hills along with the 4.5 and several tackles for loss by Albright.

“He’s having a monster senior year,” Frith said of Albright. “All the hard work he put in this offseason. He’s in the right place to make plays, and he’s doing a great job. It’s like having a weapon on defense. Anytime they drop back, they know they’ve got a dude coming off the edge.”

“It’s film study,” Frith said of his defense. “It’s putting together a game plan like (defensive coordinator) Coach (Pete) Silvey does every week. He works really hard. We put our guys in the right position to make plays.”

Going into the game, most figured this to be the de facto Sea View League championship game. San Juan Hills is in position for that title going into its bye week before road games at Laguna Hills (2-5, 1-0) and Dana Hills (2-6, 0-2).

“Going into the rest of the league, it’s going to be the same philosophy,” Frith said. “When we enter on Monday, we’re 0-0 for the season, just like the playoffs. You have to go 1-0 each week to stay as razor-sharp focused as you can.”

San Juan Hills has one league title (2013) in school history.

Aliso Niguel came out swinging with a 51-yard pass on their first play from scrimmage, but the Stallions defense buckled down to force the Wolverines to kick.

The Stallions came flying in to block the kick, and Hobert got a hand on it. Hobert scooped it up and broke away from defenders for a 57-yard scoring return and the lead, 7-0.

After an Aliso Niguel three-and-out, San Juan Hills marched on a 67-yard, six-play drive that Chase Monarch concluded on a two-yard scoring run.

To start the second quarter, San Juan Hills strung together a 13-play drive that Hudson Jones ended on a two-yard touchdown pass to Joey Hobert for a 21-0 lead.

Late in the second quarter, Lewis blocked the Aliso Niguel punt, and San Juan Hills recovered at the Wolverines 11-yard line. On the next play, Lewis took the hand-off and threw to Hobert for the 11-yard touchdown.

Hobert snuck in a 28-yard field goal as the first half expired for a 31-point lead.

San Juan Hills put the game to rest with an 11-play drive to open the third quarter that Monarch finished with a fourth-down, one-yard leap into the end zone for the final score, 38-0.