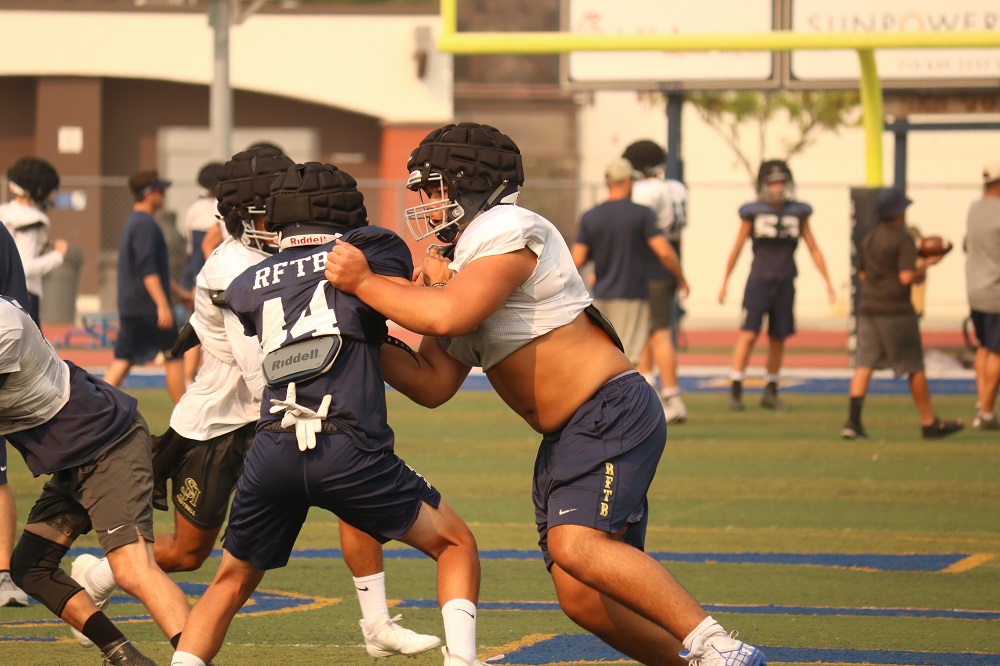 In our annual San Juan Capistrano high school football preview, we delve into everything you need to know about the upcoming San Juan Hills season. Scroll through the PDF version above for more photos and interviews.

For the first time since 2010, the San Juan Hills football team had a new head coach roaming the sidelines at the Badlands for the Stallions season opener on Friday, Aug. 17.

Coach Rob Frith was hired on Feb. 4 to replace Aaron Flowers, who stepped down after coaching the previous seven of San Juan Hills’ 10 seasons as a varsity program. Frith transitioned the program through spring, summer and fall camp to finally arrive at the season.

“This team has exceeded my expectations,” Frith said. “All three phases of the game, we’re at a really good place. We’re comfortable with our progression up to this point. Coming out here working with the boys and our coaching staff is a pleasure.”

The Stallions dropped their home opener to county power Orange Lutheran, 27-7, but leading up the game, Frith said he wanted his team to be competitive against their highly touted Trinity League foe. San Juan Hills was that and showed the promise that Frith will continue the carry on the strong young tradition the Stallions have established.

“We were so used to running one offense, and getting a new coach was a little bit of a shock,” senior tackle Sean Rhyan said. “Coach Frith came in and kind of blended the offenses really well, and now it feels like he’s been here the four years.”

San Juan Hills moves up to Division 2 after three straight playoff appearances and a second-round run in Division 4 last season. The Stallions have size all around and have the athletes to handle the move up.

“I think our team is almost an underdog team,” junior Joey Hobert said. “People won’t expect us to be coming. We have fast players. We’re strong. Our line is bigger than what I would say is normal.”

On offense, all eyes will be drawn up front to Rhyan. The four-star, 6-foot-5, 315 lbs. tackle has picked up 13 college offers and will be the rock and bulldozer for the Stallions’ sizeable o-line.

At Frith’s last stop as a head coach, he was known for an up-tempo spread offense, including a county record-breaker. Through the offseason, two junior quarterbacks were battling for the helm of the offense with Bryce Crider taking the reins in the opener after Jake Carreon, a transfer from Mira Costa, took first team reps in camp.

“Everybody’s different,” Frith said. “Every year is different. My job is to figure out what is best for the personnel. The kids that we have. We have some athletic players that can stretch the field and do some things, sideline to sideline put pressure on the defense”

Defensively, San Juan Hills is solid with returners all over and a finely tuned scheme.

“Our defensive coordinator (Pete Silvey) is very good and extremely creative,” Frith said. “His schemes are sound. It’s the players’ second full year in this system. They have an attitude, know what they’re doing, fly around.”

The Stallions may have new management, but the wheel of success continues to turn.