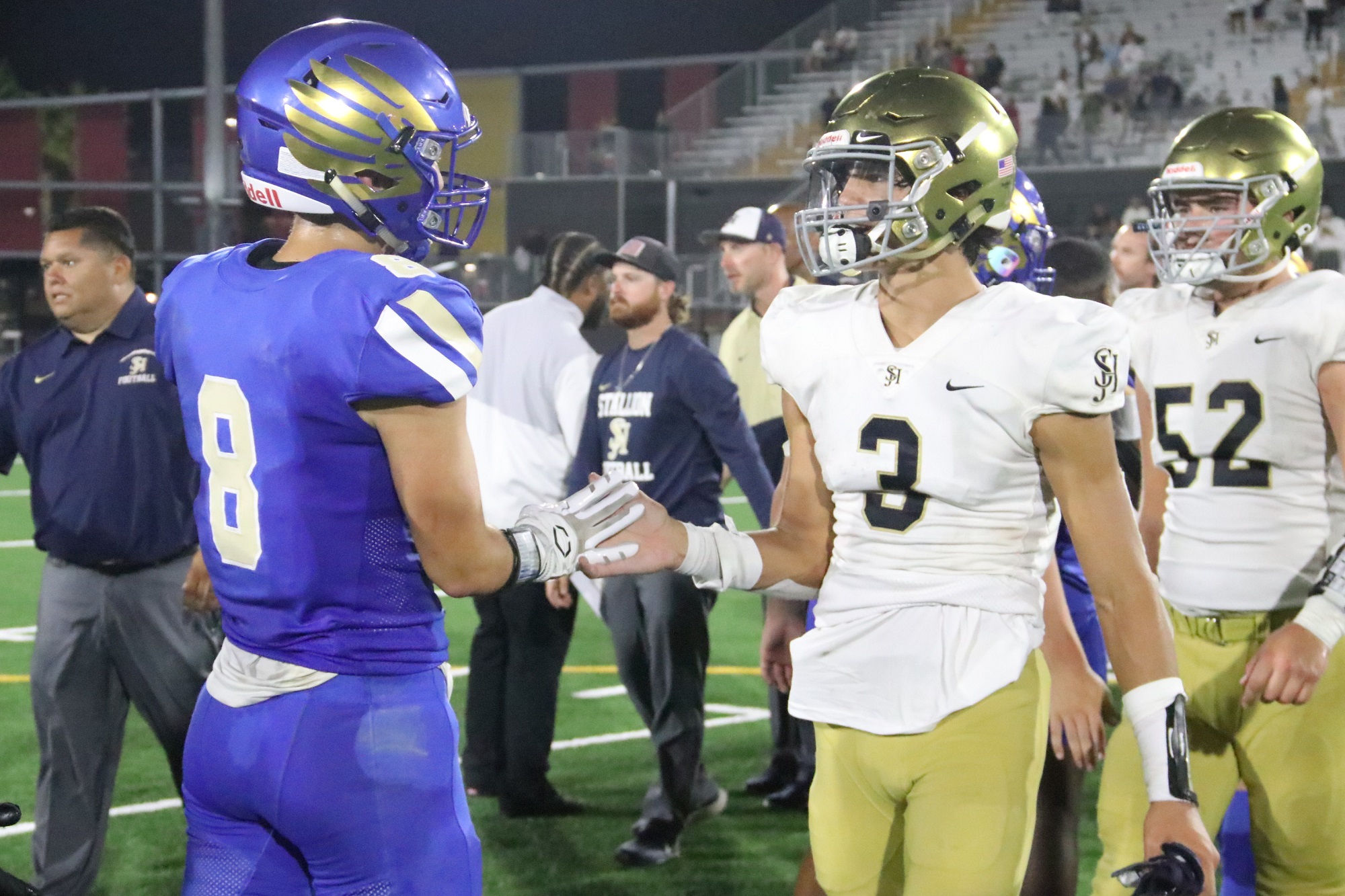 Rob Frith wanted to test his Stallions and scheduled appropriately with a Trinity League trial against Santa Margarita in the very first game at the renovated Saddleback College stadium.

San Juan Hills seemingly met its challenge early, but in the end, first-half miscues and a tremendously potent Santa Margarita offense did in the Stallions.

Santa Margarita racked up an interception, fumble and blocked punt in the second quarter and scored three quick touchdowns in the final minutes of the first half to pull away from San Juan Hills and win the season-opener, 38-14.

“At times I thought we did really well, and at times, I thought we showed a bit of inexperience,” San Juan Hills coach Rob Frith said. “That is why you schedule teams like this. That’s why you can’t be afraid to play against Trinity League schools, because you have to find out where you’re at. You cannot give a team that good that many extra opportunities.”

For the challenge he wanted to present his team, Frith thought his group got what it needed to get out of this game, despite the final deficit.

“It’s an opportunity to see where this program is and play one of the best teams in the county. It’s fine if we’re not there right now,” Frith said. “The goal is to get to that level as that season progresses. This is just where we’re at right now, but I’m proud of my guys. They fought for 48 minutes.”

Santa Margarita quarterback Jaxon Potter, a transfer from JSerra, threw for 285 yards and three touchdowns, and the Eagles were also paced on the ground with a 161-yard performance by Jake Foye, who also ran in a score.

San Juan Hills got its jitters out on an opening three-and-out, and Santa Margarita showed what it was worth with an 22-yard touchdown pass from Potter to Niko Lopez for a 7-0 lead. Potter’s first six passes went to the explosive Lopez.

The Stallions regrouped on the legs of Joseph. Joseph escaped pressure for a 20-yard run, and penalty on the Eagles set up San Juan Hills deep. Joseph dodged a near sack and ran for another 17 yards, and the junior perfectly placed a 17-yard pass to Pegan, who cradled the ball in the end zone for the score. San Juan Hills pulled even, 7-7.

From there, the Stallions held tough and held it even.

Santa Margarita punted on its next drive, and despite an interception on San Juan Hills’ next drive, the Stallions denied points again as Cole Monach blocked a field goal attempt.

The Eagles went ahead on their next drive as they found their ground game with Foye, and Gage Grant took a direct snap on a 7-yard touchdown run for the lead in the second quarter, 14-7.

Both teams stalled on their next drive, but it was a fumbled snap by San Juan Hills late in the second quarter that Santa Margarita pounced on and turned on its jets.

Santa Margarita found its lanes on the ground, and Foye scored on a 13-yard run for a 21-7 lead with just over two minutes left in the half. After a San Juan Hills three-and-out, Potter found Nick Gallegos on a 43-yard catch-and-run, and Potter threw an 18-yard strike to Jalen Jones for a 28-7 lead with 46 seconds remaining.

San Juan Hills was forced three-and-out once more, and after Santa Margarita blocked the Stallions’ punt, the Eagles snuck in one more score before the break. On the first play after the recovery, Potter hit Jones again on a 28-yard pass for the touchdown and a 35-7 lead with seven seconds left.

San Juan Hills got back on the board midway through the third quarter. After a couple shots at the end zone and a couple Santa Margarita penalties, Joseph hit Pegan again on a quick slant for a 1-yard touchdown pass. Eagles maintained a 35-14 lead.

“That kid is going to be really good,” Frith said of Port. “For a 14-year-old kid in his first varsity game, he’s always going to remember that.