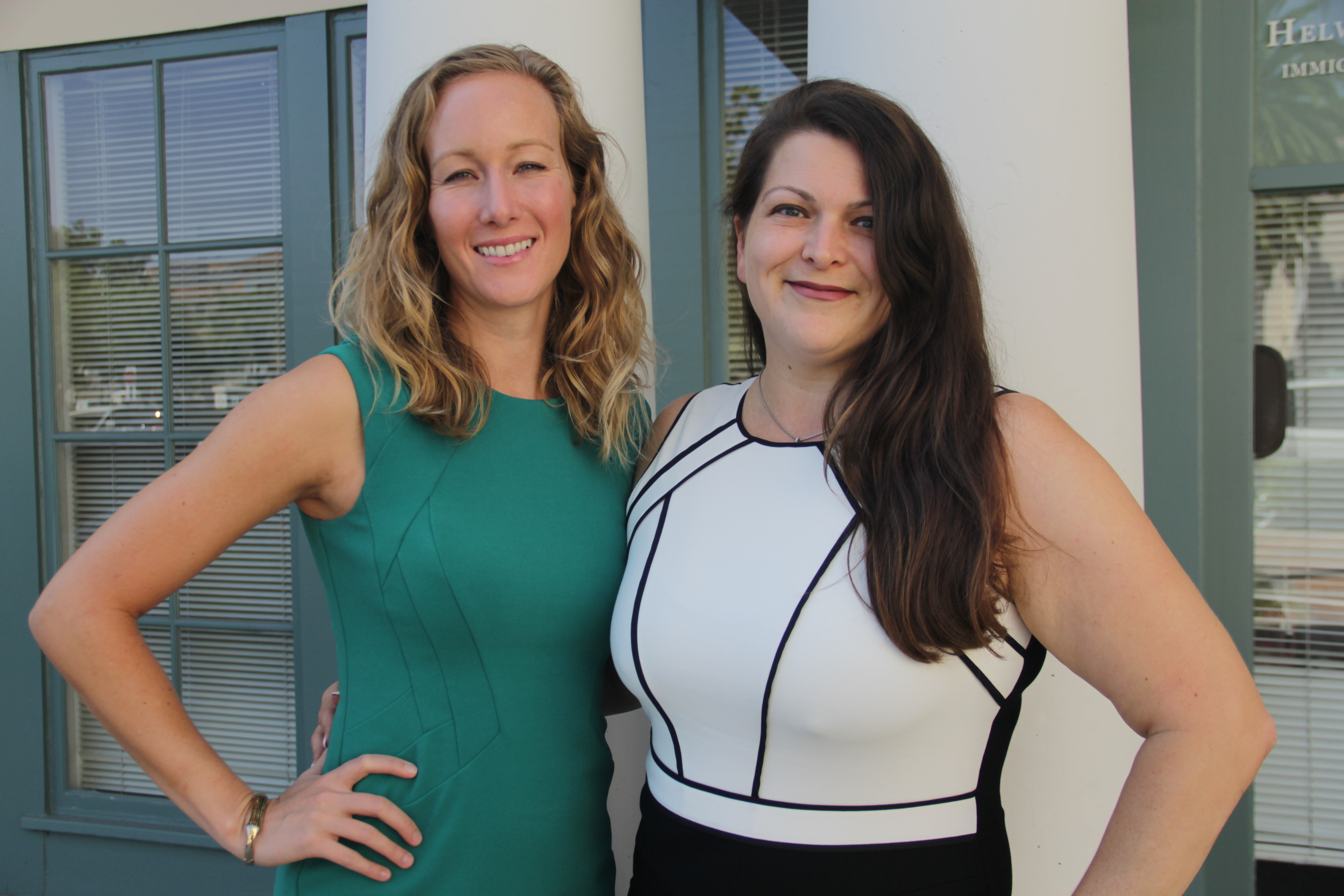 Throughout her lifetime, Christina Helwig has experienced abuse on multiple levels.

“If you could put a word in front of ‘abuse,’ I experienced it,” said Helwig.

From the time she was a child, Helwig says, she was abused both physically and mentally by her mom.

At “a certain point, the physical (abuse) stopped, but the psychological continued up until adulthood, causing me to completely split off and push that relationship away,” Helwig told The Capistrano Dispatch during an interview in her law office in San Juan Capistrano.

Moreover, Helwig states, she was sexually abused by her uncle.

When she began attending law school, Helwig just wanted to forget her background.

“When you’re coming from a background where you experienced abuse, you want to shove it into a box, you want to pretend it doesn’t exist and kick it down the street as hard as you can, so that it never touches you and you never see it again,” she said.

For the past few years, the abuse survivor-turned-attorney has used her own experiences to help other victims navigate their way through the legal system in the hopes of escaping their abusive partners and relationships.

“I can bring something to the table when I’m talking to parents who have been, whose children have been molested or raped or have had something terrible happen to them,” she said, adding: “And the same type of things with the domestic violence survivors that I work with. I understand what happens inside someone’s brain with that psychological abuse and with the physical abuse and all these things.”

Partnering with local domestic violence shelters and nonprofits such as Human Options, Helwig, whose firm specializes in immigration law, provides pro bono legal services to those who may not know their rights as victims of domestic violence and abuse.

Human Options, which has offices and family resource centers throughout Orange County, operates an emergency shelter for battered victims of domestic violence. Additionally, it also offers bridge housing, transitional programs and legal aid to such victims.

“Our Legal Advocacy Program works with survivors of all different backgrounds,” said Sara Behmerwohld, supervisor for the Human Options program. “In general, survivors are often coming into the legal process having not a lot of information to start and in some cases having been fed misinformation by their abusive partners.”

When it comes to abusers feeding their victims misinformation, Behmerwohld and Helwig both note that such a scenario is oftentimes played out within the immigrant community.

As an example, Helwig says victims who are undocumented will be told by their abusive spouse: “I’m a citizen, I’ll win. They won’t give (the kids) to you” or “I’ll call immigration if you leave, and I’ll have you deported.”

“They pretend they have that power to pick up the phone and have their wife or husband taken out,” Helwig says.

Legally speaking, according to Behmerwohld, what the abusers are telling their spouses isn’t true. And in California, she adds, there are many legal protections available to certain domestic abuse survivors that don’t exist in other states.

“A big part of what we do is educating survivors of those rights and what their legal resources are,” she said.

One such protection for victims in California is the ability to break out of their rental lease early with a two-week notice and proof of either a restraining order, a police report or a letter from a service provider.

“We know that a lot of times survivors of domestic violence aren’t necessarily going to law enforcement or going to a court to get a restraining order, but if they’re able to access services with our agency or even with any of the other agencies, they can just get a letter from the service provider to do that,” Behmerwohld said. “That’s certainly not a protection in all 50 states.”

In the U.S., millions of children go through similar circumstances similar to Helwig’s upbringing.

Based on data the U.S. Department of Health and Human Services collected in fiscal 2017, more than 18% of the 3.5 million children who were the subject of an investigation that year were physically abused, while another 8.6% were sexually abused.

DHHS notes, however, that there has been a decline in the number of victims of child abuse and neglect in recent years.

And abuse among adults is also an issue that millions face across the nation. According to 2015 data from the Centers for Disease Control and Prevention, about one in four women (about 30 million) and one in 10 men in the U.S. (about 12 million) have experienced some type of intimate partner violence in their lifetime. Such abuse includes sexual violence and physical violence, as well as stalking.

Of the women who experienced intimate partner violence, close to 31% of them were victims of physical abuse, while about 21% had experienced severe physical violence, the CDC reports.

“In general, just getting to a point where someone is willing to access domestic violence services is a big challenge,” Behmerwohld said “Despite all of the public awareness and the sort of social education, there’s still a big stigma about domestic violence and accessing services for survivors.”

But even after the victim has sought resources, the next challenging step is successfully removing themselves from their abusive situation—an undertaking that’s easier said than done.

“We know that most survivors of domestic violence are going to attempt to leave their relationship before they do it successfully,” Behmerwohld said. “And the statistic that we usually cite is it takes seven to nine times before they leave for good.”

Though it may take a few tries to leave, seeking out resources, such as getting counseling and receiving personal empowerment from a service provider, is an important first step toward severing ties with their assailant.

“Oftentimes, clients aren’t going to be ready to leave the relationship until they’ve cultivated that self-confidence that they can find with those services,” Behmerwohld said.

When victims do come in for help, Helwig says she first works with them on breaking down the mental programming and control an abusive partner had on them in order for them to start making positive steps.

“You have their programming, what (the abuser is) telling the person and telling them the way things are,” Helwig said. “When you’re getting them out of that situation . . . their whole world has just imploded. And you have a whole set of people saying, ‘No, this is not the way it is; here’s your pathway, here’s where we can help you. People do care about you, you’re not worthless.’ ”

Because appearance can mean a lot, Helwig says the way she builds trust with her clients is by not dressing the part of a traditional lawyer upon their first few encounters. That means no designer clothing or anything that can be intimidating.

“I don’t go into the shelters fancy, all lawyered up,” she said, adding that “a lot of times, if I’m going to the shelter, I’m going in, in jeans. I think that going in suits is intimidating, and people stiffen up with me.”

And not wanting to overwhelm someone who’s come into the shelter right after being involved in an altercation with a spouse, she doles out her advice and counsel in pieces, working with them across multiple weeks.

“If they’re bruised up or crying or rocking back and forth, I might just be talking about how they’re doing that day, so I’m meeting them where they are and what they’re ready to really handle,” she said, noting that the shelters are only a temporary stay for many of those victims who are concerned about where they’re going to live in the next few days.

“They’re focused on the fact that they need to have a house in three days, so I might just be getting biographical information from them,” as well as giving them her contact information, Helwig said. “And just establishing the window for getting back with me, because we can’t work on a case in three days; that’s not possible.”

Helwig acknowledges that she didn’t obtain a law degree for the purpose of helping abuse survivors, but rather, she saw it as a means to an end—a way to live a different life that was the opposite from the conditions she grew up in.

“I grew up in not particularly great circumstances; I can remember standing in a welfare line with my mom, and I can remember her also going to get food from food pantries,” she said, adding: “So getting into law was . . . I felt like lawyers didn’t have these sorts of problems in their life.”

After getting her law degree, she worked in corporate law for a while. But after realizing that she hated the work, and it wasn’t why she got her degree, she left corporate law and began working at a friend’s law firm, where she had been working on cases with domestic abuse victims.

“I started taking pro bono cases, so I called all the shelters in Orange County” asking to take on cases, she recalled. “Everyone on the phone was shocked, because nobody did that, and I took 10 pro bono cases all at once basically, and that’s how my firm started.”

Human Options has six family resource centers in Orange County, one of which is in San Juan at the CHEC Family Resource Center located at 27412 Calle Arroyo. That office can be reached at 949.489.7742.

Editor’s Note: An abridged version of this story was published in Sept. 13 edition of The Capistrano Dispatch.