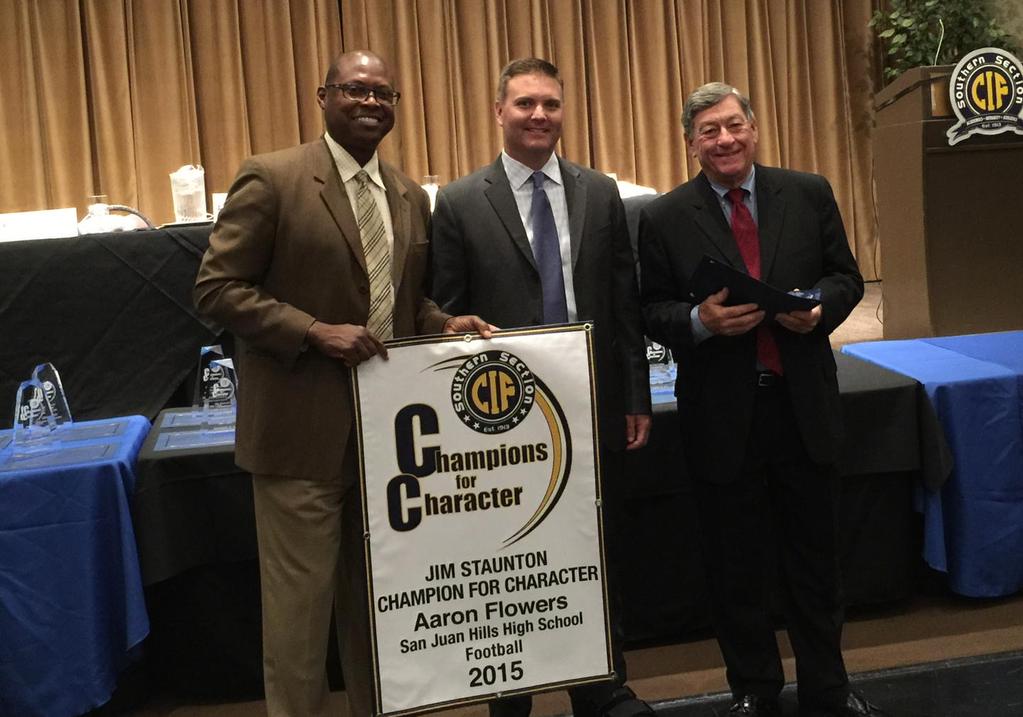 Week 5 of the high school football season is in the books, which means league play is about to begin.

Four of the five San Juan Capistrano high school programs will enter the second half of the season undefeated. The five area programs hold a combined 21-4 record.

Flowers was among 42 other coaches and student-athletes that were honored for their “exemplification of sportsmanship, character, integrity and athletics,” according to a press release.

Flowers has guided the Stallions football program to an impressive 6-0 record in 2015. The Stallions have defeated quality teams like San Clemente and Los Alamitos and enter the South Coast League as a legitimate threat to challenge for a playoff berth.

San Juan Hills broke into the CIF-SS West Valley Division rankings for the first time in program history several weeks ago. The team is currently ranked sixth in the highly competitive division.

The Stallions are on a bye week following a 61-24 win over Beckman on Oct. 1 and will travel to open league play against El Toro on Oct. 16.

The Stallions are in the midst of a special season, made so in part by the play of their senior quarterback Patrick O’Brien. O’Brien has thrown for 1,731 yards and has completed 79 percent of his passes. He has thrown 19 touchdowns to four interceptions and is averaging 59.3 rushing yards per game.

The Stallions have benefitted from other versatile playmakers on both sides of the ball.

Junior receiver Jacob Huff has caught a team-high 50 catches for 879 yards and eight touchdowns. The Stallions running back corps has shined, as Brock Cazel (51 carries, 299 yards), Cole Suchesk (45 carries, 344 yards) and Devin Wegis (23 carries, 172 yards) have all taken turns being the team’s go-to back on a game-to-game basis.

The Stallions are certainly poised to make noise in the South Coast League and El Toro (4-2) will be the team’s first step toward what could be a special second half of the season. –Steve Breazeale

The Saddleback Valley Christian football team once again lit up the scoreboard against a nonleague opponent as they defeated Calvary Chapel of Santa Ana 55-27 on Oct. 2.

The Warriors (5-0) will enter league play with a perfect record.

For Saddleback Valley Christian, the week 5 matchup against the Eagles was more than just a homecoming game. It was the final game before facing their rivals in the San Joaquin League, where the Warriors seek yet another title.

Despite the final score, there were some severe obstacles for the Warriors to overcome against Calvary Chapel. Savai’i Cravens, the team’s star receiver, did not play and missed his first game of the season after leading the team with 12 receptions, 348 yards and four touchdowns through the first four games.

With Cravens out, Saddleback Valley Christian successfully ran the ball for most of the game.

Warriors’ quarterback Cade Henjum, who entered the game with 651 passing yards and 11 touchdowns, escaped the pocket and ran more often than he passed. He ended the night with 45 rushing yards and a touchdown on 12 rushing attempts and completed four of seven passes for 43 yards and an interception.

Running back Dalton Lohman had a standout offensive performance of his own, rushing for 200 yards and three touchdowns on 12 carries. With Calvary Chapel leading 7-0 early in the first quarter, the Warriors responded with back to back scoring drives, both of which were punctuated by Lohman touchdown runs of 42 and seven yards, respectively. Lohman scored his third and final rushing touchdown of the night five minutes into the second quarter to give the Warriors a 21-14 lead.

Senior David Molina showed promise on offense, defense, and special teams. From the safety position, Molina recorded two of the Warriors’ three interceptions and ran one of them back for a touchdown. As a running back, he rushed 12 times for 112 yards and two touchdowns.

Saddleback Valley Christian was able to put the game out of reach in the third quarter. Following a 14-yard Molina touchdown run, a one-yard scoring run from Ryan DeViso and Molina’s interception return for a touchdown, the Warriors took a commanding 55-19 lead.

Other area games this week