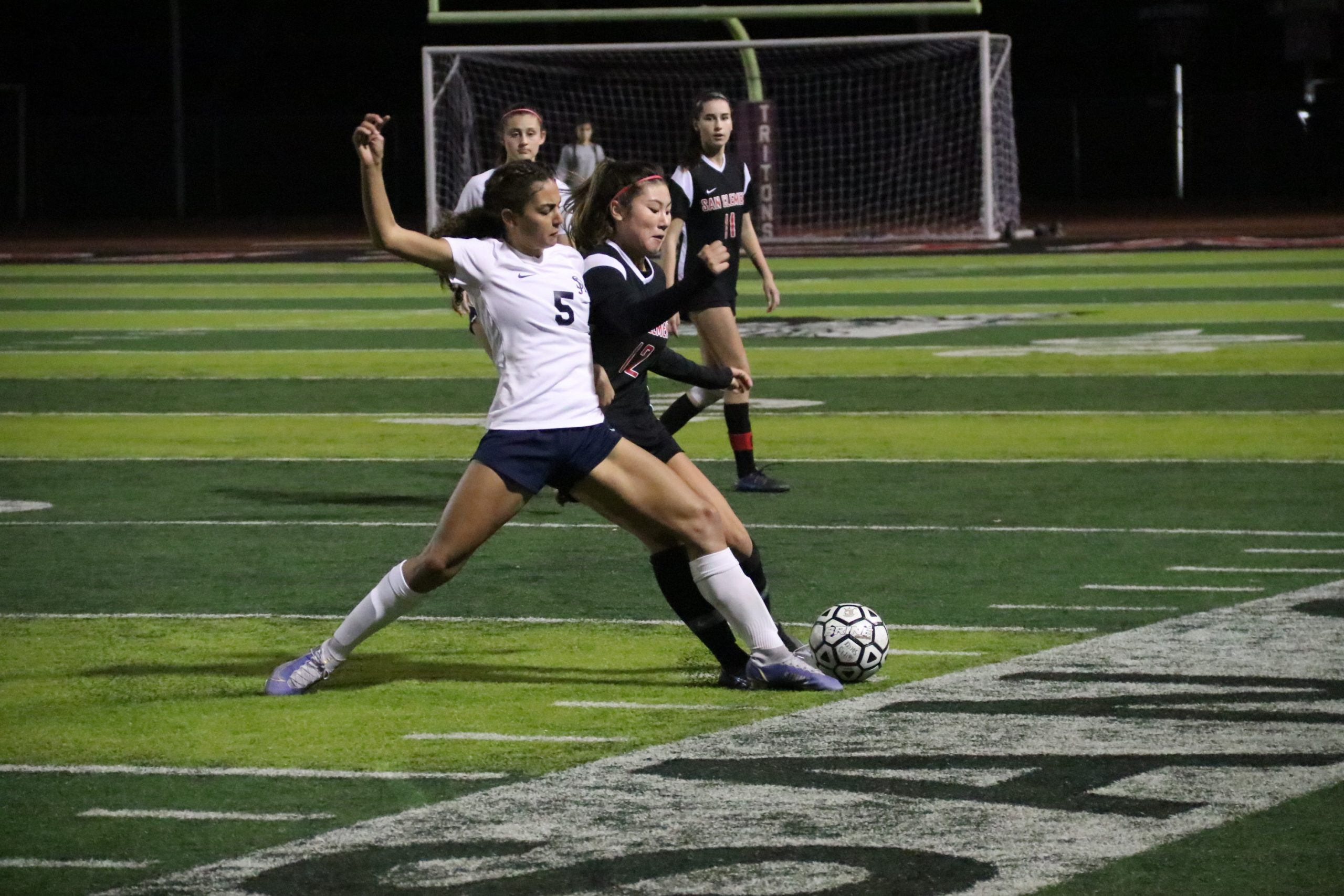 The old saying in American football is that “defense wins championships,” and that maxim extends to the greater expanse of the world’s football, even to the top of the South Coast League’s girls soccer title race.

Defense is clearly the name of the game in the South Coast League, even as teams jostle for the top spot. That point was made even clearer as San Clemente hosted San Juan Hills on Tuesday, Jan. 25.

Both teams traded flurries of chances late in the second half, but time and time again, both teams’ back lines swept away the danger, as San Clemente, ranked No. 8 in CIF-SS Division 1, and San Juan Hills, No. 10 in Division 1, played to a scoreless draw at Thalassa Stadium.

“I thought we had a lot of chances,” San Juan Hills coach Farrel Moore said. “We were just unlucky not to get one tonight, but soccer is like that sometimes. It’s a good battle. It’s always a battle with San Clemente.”

San Clemente remained in the driver’s seat for the league title, and the Tritons could close out the league with a variety of win-draw combinations in the final two games, depending on how the rest of the league fares. Either way, the Tritons controlled their destiny starting with a road game at Tesoro on Thursday, Jan. 27, and a home season finale against Trabuco Hills on Monday, Jan. 31. San Clemente will watch the scoreboard on the league’s final day on Wednesday, Feb. 2.

San Juan Hills trailed the Tritons by a single standings point, but all the Stallions can do for a league title chance is win out and hope for San Clemente to drop a point somewhere. San Juan Hills hosted Aliso Niguel on Thursday and closes at Tesoro on Feb. 2.

Tesoro, ranked No. 2 in Division 2, was three points behind San Clemente for first, but the Titans have a game in hand on both the Tritons and Stallions. Tesoro hosted San Clemente on Thursday, plays at Aliso Niguel on Monday and hosts San Juan Hills on Feb. 2.

Thursday’s results were not available at press time.

On Tuesday, both San Clemente and San Juan Hills were led by their stalwarts in the central defense.

For San Juan Hills, it was Peyton Leonard as the defensive lynchpin. Leonard was involved in nearly every defensive stop for the Stallions, with blocked shots and singularly winning balls struck deep by San Clemente, as the Tritons began to attack more in the later stages.

“She was outstanding for us,” Moore said. “She’s been a presence for us back there since her sophomore year. Strong in the air, the long throws. She brings a lot of attack and defended really well tonight.”

Going forward, both teams are quite focused on the task at hand. Goals are at a premium, and both teams know they have to up their creativity to break through. They both also know who they are as defensive units and are ready for the stretch run and playoffs after that.

In what’s been a tremendous season for the program, the JSerra boys soccer team has only lost twice.

The Lions, ranked No. 5 in CIF-SS Division 1, took their first loss back on Dec. 10 in a 3-2 contest against Santa Ana Valley, now ranked No. 3 in Division 1. JSerra went unbeaten for another month before its first clash with the other Trinity League title contender, Servite, on Jan. 12. The Friars, ranked No. 1 in Division 1, shut out the Lions, 4-0, with a three-goal first half.

Outside of the Servite shutout, JSerra has outscored league opponents by a wide margin, 20-4, although 11 of those goals have come against St. John Bosco. Senior Tyler Stewart leads the Lions with 11 goals this season. Senior Sean McTague has eight goals and six assists, and junior Reagan Heslin has seven goals and five assists.

JSerra next plays at Orange Lutheran on Monday, Jan. 31, and closes out the regular season at Mater Dei on Thursday, Feb. 3.

St. Margaret’s boys soccer (5-5-4, 4-0-1) in unbeaten in the San Joaquin League with three games to play. The Tartans have four shutouts in league and have outscored league opponents, 12-1.

Capistrano Valley Christian girls soccer is the only other ranked city team at No. 6 in Division 7. The Eagles are well ahead in the Academy League standings at 5-0. CVC is led by prolific freshman Ila Allred, who has scored 20 goals this season. The Eagles have scored a total of  53 goals in 11 games.