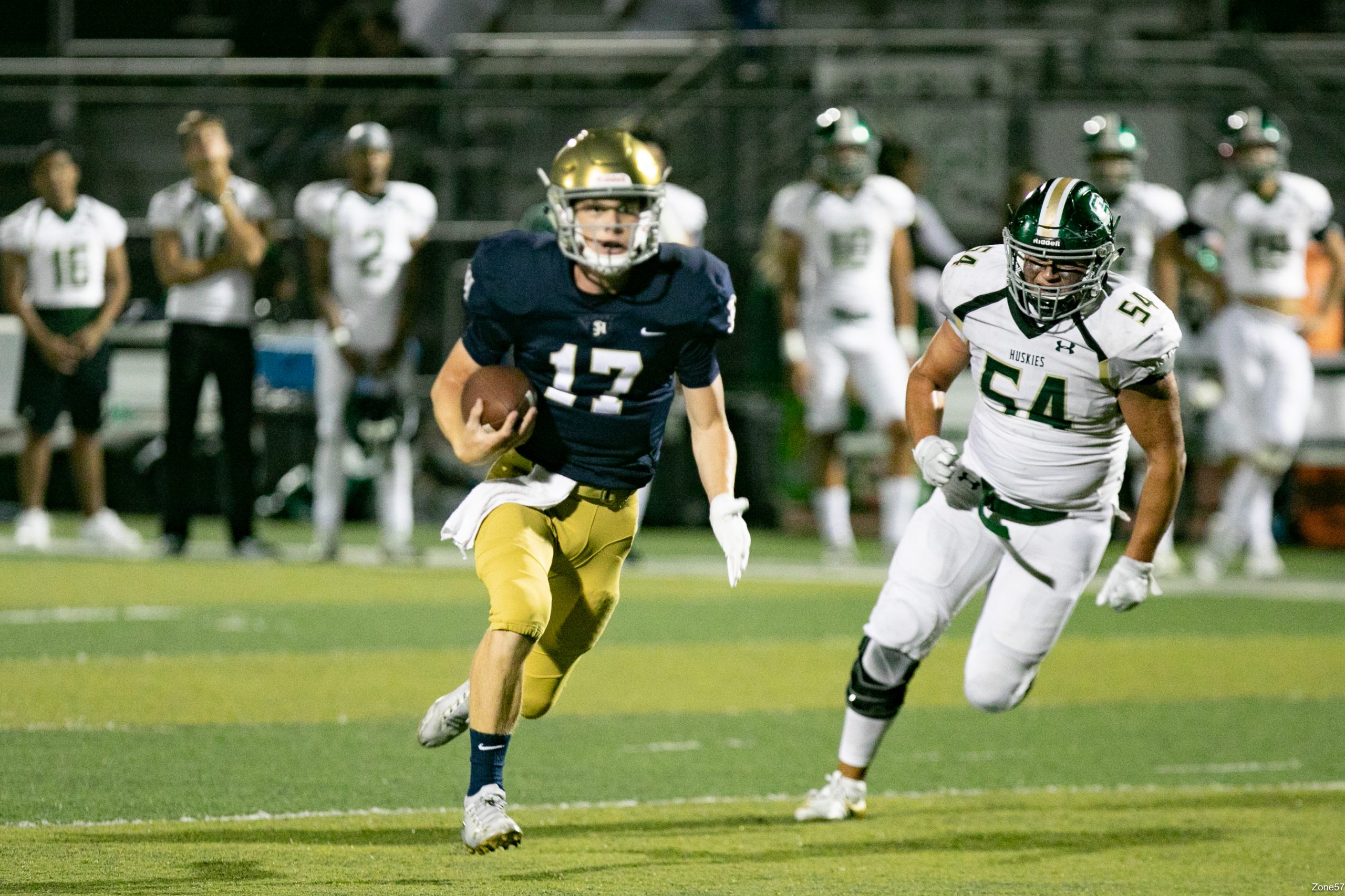 San Juan Hills Football Dominates in Return to the Field

The last time the San Juan Hills football team won a game, it was coming off the field with its first CIF-SS championship plaque on Nov. 30, 2019 at Loyola High School in Los Angeles.

Nearly 16 months later, it seems as if the Stallions haven’t lost a step.

San Juan Hills scored early and often against visiting El Toro and came out with a convincing victory, 48-14, in both teams’ 2020-21 season opener on Friday, March 19, at San Juan Hills High School.

Senior quarterback Hudson Jones completed 13 of 20 passes for 287 yards and three touchdowns, with nearly two-thirds of those yards going to junior Braden Pegan. In a breakout performance, Pegan had five receptions for 188 yards, including a 69-yard touchdown pass on the opening possession for San Juan Hills (1-0).

El Toro (0-1) showed some fight by evening the score on the next drive, 7-7, but San Juan Hills went back on top on the ensuing kickoff. Pegan added to his incredible night with an 84-yard kickoff return touchdown for the lead, 14-7. Pegan racked up 272 all-purpose yards for the Stallions.

Jones connected with senior Brayden Burnes for a 20-yard screen pass touchdown to extend San Juan Hills’ first-quarter lead, 21-7. Senior Cooper Miltenberger hit one of his three field goals in the game in the second quarter, and Burnes ran in for the first of his two rushing touchdowns in the game late in the first half for San Juan Hills to maintain control at halftime, 31-7.

On the defensive side, senior Dylan Bennett recovered a fumble and returned it 51 yards to the El Toro 1-yard line. Senior Elliot DeGroote had one sack, and senior Elijah Ponce and junior Jaden Williams combined on another. Ponce led San Juan Hills in tackles with 11.

Next up, San Juan Hills plays at Capistrano Valley (0-1) on Friday, March 26. The Cougars lost their opener at San Clemente, but they hung tough with quarterback Dart Moussiaux throwing for 325 yards and two touchdowns.

Like most football teams across the state, the win was simply returning to the field on Friday, March 19, but neither JSerra nor St. Margaret’s had the opener they imagined after 16 months away.

St. Margaret’s had a fantastic start with a 16-0 lead at halftime, but the Tartans fell at Estancia of Costa Mesa, 35-16.

Derek Smith was the star for St. Margaret’s (0-1) in the early going. Smith returned the game’s opening kickoff 97 yards for a touchdown and added a 44-yard interception return to push the Tartans out quickly. Smith also led St. Margaret’s with five catches for 36 yards.

On defense, Penn-bound senior Nick Ostlund had a sack, forced a fumble and collected nine total tackles for St. Margaret’s.

Estancia didn’t go quietly on its home field, scoring 35 unanswered points in the second half to take the win.

St. Margaret’s returns to San Juan Capistrano for its only home game of the season on Friday, March 26. The Tartans play host to Rancho Christian of Temecula. St. Margaret’s closes its three-game season on Thursday, April 1, at Westminster.

JSerra opened its season with as tough an opponent as you can have with perennial national power Mater Dei coming down to South Orange County for both teams’ Trinity League opener.

Unfortunately for the Lions, the matchup was never close. Mater Dei (1-0) stormed out to 21-0 lead after the first quarter and a 38-0 lead at halftime. JSerra (0-1) added a field goal in the third quarter, but that would be all the points the Lions could muster. Mater Dei earned the victory, 52-3.

JSerra then went up against local rival Santa Margarita (1-1) on Thursday, March 25, but results were not available at press time. Santa Margarita hosted this game at Santa Ana Stadium.

JSerra will next play at St. John Bosco in Bellflower on Saturday, April 3, and then host Servite on April 9.

Action is exploding on athletic fields across Orange County, and now the gyms are getting in on the action, as well.

Following a lawsuit settlement that forced an update to the state guidelines, indoor sports have been allowed to return, if they follow the more stringent protocols followed by college athletics teams.

San Juan Hills, St. Margaret’s and JSerra all got their girls volleyball teams some very late-season action and were able to host senior nights for their squads. Basketball seasons are set to start this week as well, with nearly all boys and girls teams for the San Juan Capistrano schools in action.

Baseball is also off to a roaring start, with the biggest highlight provided by the JSerra baseball team. The Lions, one of the top-ranked teams in the state and entire region with 13 college commits, posted their third no-hitter in school history on Monday, March 22.

Tristan Lamaison and Matt Champion combined for the no-hitter in the 6-0 win over Crespi. Lamaison started with two strikeouts in two hitless innings, and Champion, a freshman, retired all 15 batters he faced with seven strikeouts in five innings of relief.