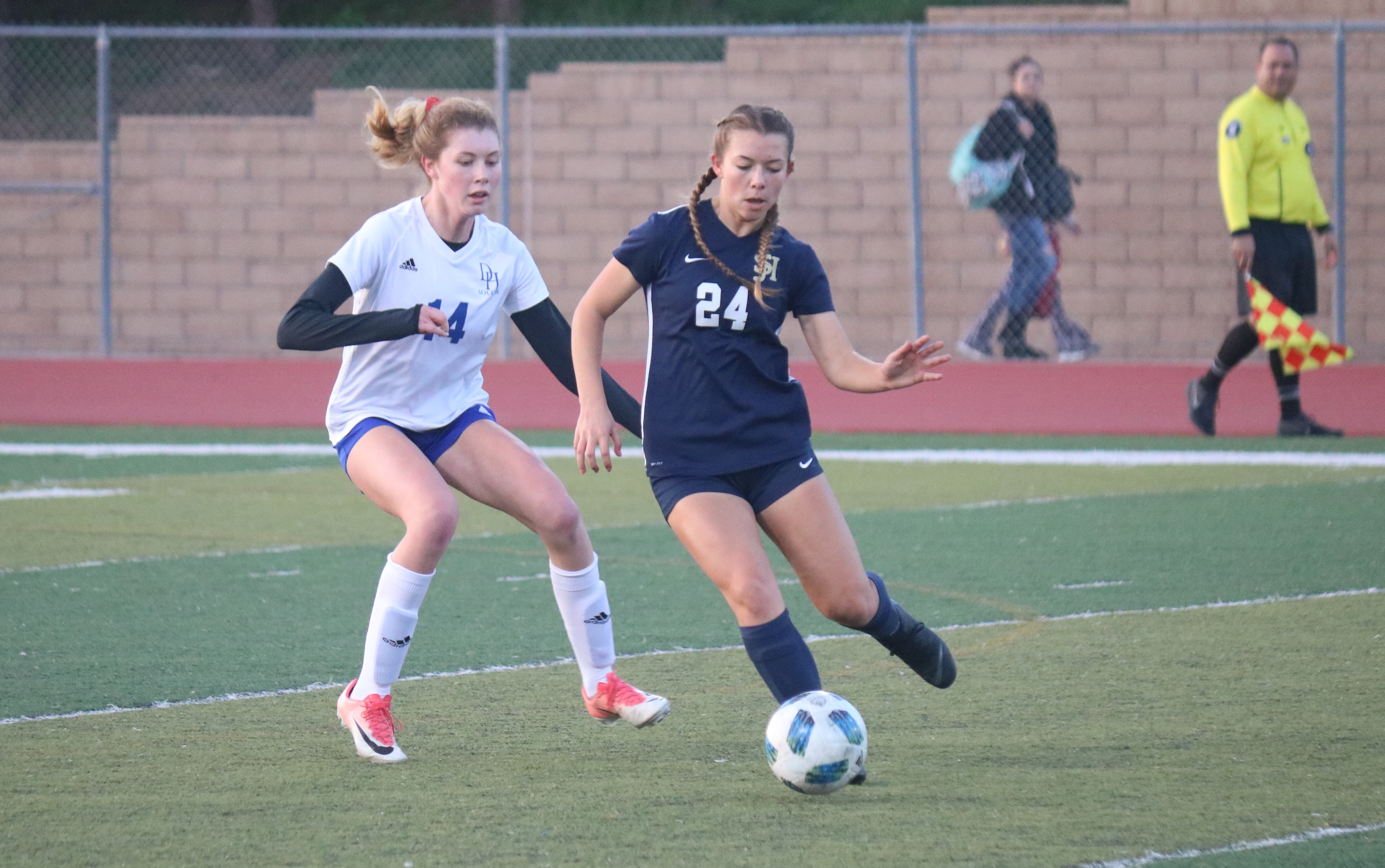 The San Juan Hills girls soccer team has been racking up standings points in the South Coast League.

San Juan Hills’ lone league loss came on the road at San Clemente, 2-1, on Jan. 12. The Stallions had the opportunity to avenge the loss and take control of second place in league at home on Thursday, Jan. 24. Results were not available at press time.

The Stallions have one game remaining in the regular season at Aliso Niguel on Tuesday, Jan. 29. CIF-SS playoffs will follow with the brackets being released on Sunday, Feb. 2.

JSerra Girls Soccer Still No. 1 in the Nation

The JSerra girls soccer team was dealt its first loss of the season, but it didn’t remove them from the No. 1 spot in USA Today’s winter rankings.

The two-time defending CIF-SS champion Lions (13-0-1, 4-0-1) played to a scoreless draw in a rainstorm at rival Santa Margarita on Jan. 15. The draw was JSerra’s 10th shutout of the season.

JSerra allowed only its fifth goal of the season in a win over Rosary, 3-1, on Tuesday, Jan. 22.

The Lions play at Mater Dei on Saturday morning, Jan. 26, and close out the regular season in a league title game at home against Santa Margarita on Tuesday, Jan. 29

With only one round of league games, the margin in the Trinity League boys basketball standings is razor-thin.

JSerra (19-7, 2-2) is in a three-way tie for third place and the final guaranteed playoff berth with Santa Margarita and Orange Lutheran with one game to play. All three teams are one game behind co-leaders Mater Dei and St. John Bosco.

All five of those teams are playing in the Nike Extravaganza this weekend at Mater Dei. JSerra will play St. Augustine of San Diego on Saturday, Jan. 26.

Then comes each Trinity League team’s most important game with their league and season finales on Wednesday, Jan. 30. JSerra likely controls its own destiny in terms of playoff positioning.

The Lions host Santa Margarita while Orange Lutheran plays at Mater Dei. JSerra needs a win and an Orange Lutheran loss to secure playoff positioning. Should Orange Lutheran pull off the upset over Mater Dei, the Lancers and Monarchs would both hold the head-to-head tiebreaker over JSerra for second and third place.

JSerra should be in line for a playoff spot either way, but the right results would spare the Lions the stress on the bracket release day, Monday, Feb. 3.

CVC Boys Basketball Proving to be Among County’s Best

The Capistrano Valley Christian boys basketball team (19-6, 4-1) is ranked No. 10 in Orange County and No. 5 in CIF-SS Division 3A and has knocked off plenty of larger public schools so far this season.

CVC has been strong throughout league as well with 11 points being its smallest margin of victory. The Eagles have one loss in their opener to league leader Fairmont Prep.

CVC hosted Fairmont Prep with an opportunity to force a tie at the top of the league standings on Thursday, Jan. 24. For a full game story, check out www.thecapistranodispatch.com.

The St. Margaret’s girls soccer, boys soccer and boys basketball teams are all posting undefeated records in their respective leagues.

The Tartans girls soccer team (14-1-2, 5-0) has maintained its vice grip on opponents, league or otherwise. St. Margaret’s has only allowed four goals all season with 14 shutouts. The Tartans have won six in a row by a combined score of 21-1 with four consecutive shutouts.

Girls soccer is ranked No. 1 in CIF-SS Division 4 with three games remaining. The Tartans host Southlands Christian on Thursday, Jan. 31.

St. Margaret’s was on a seven-game winning streak heading into Thursday, Jan. 24’s match against Samueli Academy. The Tartans have two games after that with the season finale at home against rival Sage Hill on Wednesday, Jan. 30.

The St. Margaret’s boys basketball team (16-9, 6-0) has found the edge in its latest league games.

There are two games remaining for the Tartans, both on the road. St. Margaret’s plays at Southlands Christian on Friday, Jan. 25 and closes the regular season on Thursday, Jan. 31 at Sage Hill.

CIF-SS basketball brackets will be released on Monday, Feb. 3.