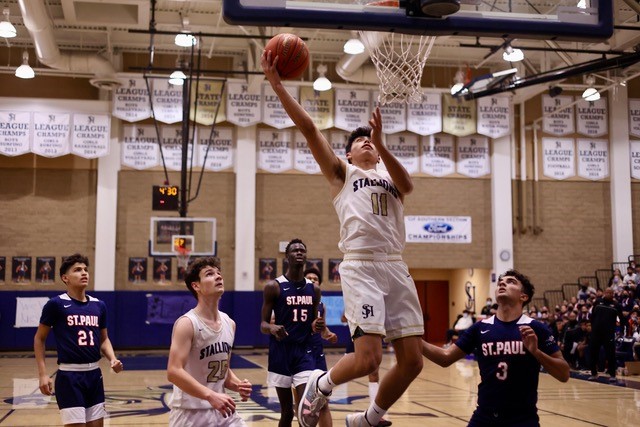 In these CIF-SS Division 2A playoffs, the San Juan Hills boys basketball team has played in its first quarterfinal and its first semifinal, and now, the No. 1 seed Stallions are on to their first CIF-SS final.

With its strong defense and hot shooting, San Juan Hills held off St. Paul of Santa Fe Springs, 63-53, in the CIF-SS Division 2A semifinals on Tuesday, Feb. 22, at San Juan Hills High School.

The Lions led by double digits for the entirety of the final three quarters to roll over the Braves, 60-44, in a CIF-SS Division 1 semifinal on Tuesday, Feb. 22, at JSerra Catholic High School.

CVC (16-6) advances to its first CIF-SS Final since 1997 and will attempt to win its first title on Saturday, Feb. 26, at 7 p.m. at Desert Christian Academy in Lancaster.

The Eagles have outscored their playoff opponents by a collective score of 285-116, with an average margin of victory of more than 42 points per game.

The JSerra boys soccer team took advantage of a penalty kick, and San Juan Hills was defeated on penalty kicks in each team’s respective CIF-SS semifinal on Tuesday, Feb. 22.

In Division 1, JSerra’s Sean McTague converted a penalty kick in the 61st minute, and McTague scored again late in the game to send the Lions past No. 2 seed Mira Costa, 2-0, and advance to their first CIF-SS final since winning the Division 1 title in 2010.

Senior Cole Monach scored twice to put San Juan Hills up early in the second half. However, visiting Montebello scored on a rush goal in the 74th minute, and well past the 80th minute in stoppage time, the Oilers converted a perfectly placed 25-yard free kick to tie, 2-2.

After two scoreless overtime periods, the game entered penalty kicks. The teams were tied with three goals each going into the decisive fifth round, but after Montebello converted, San Juan Hills’ final attempt went over the goal, cinching the Oilers’ victory.

San Juan Hills (10-3-6) was playing in its first semifinal after winning its first league title and first playoff game this season.