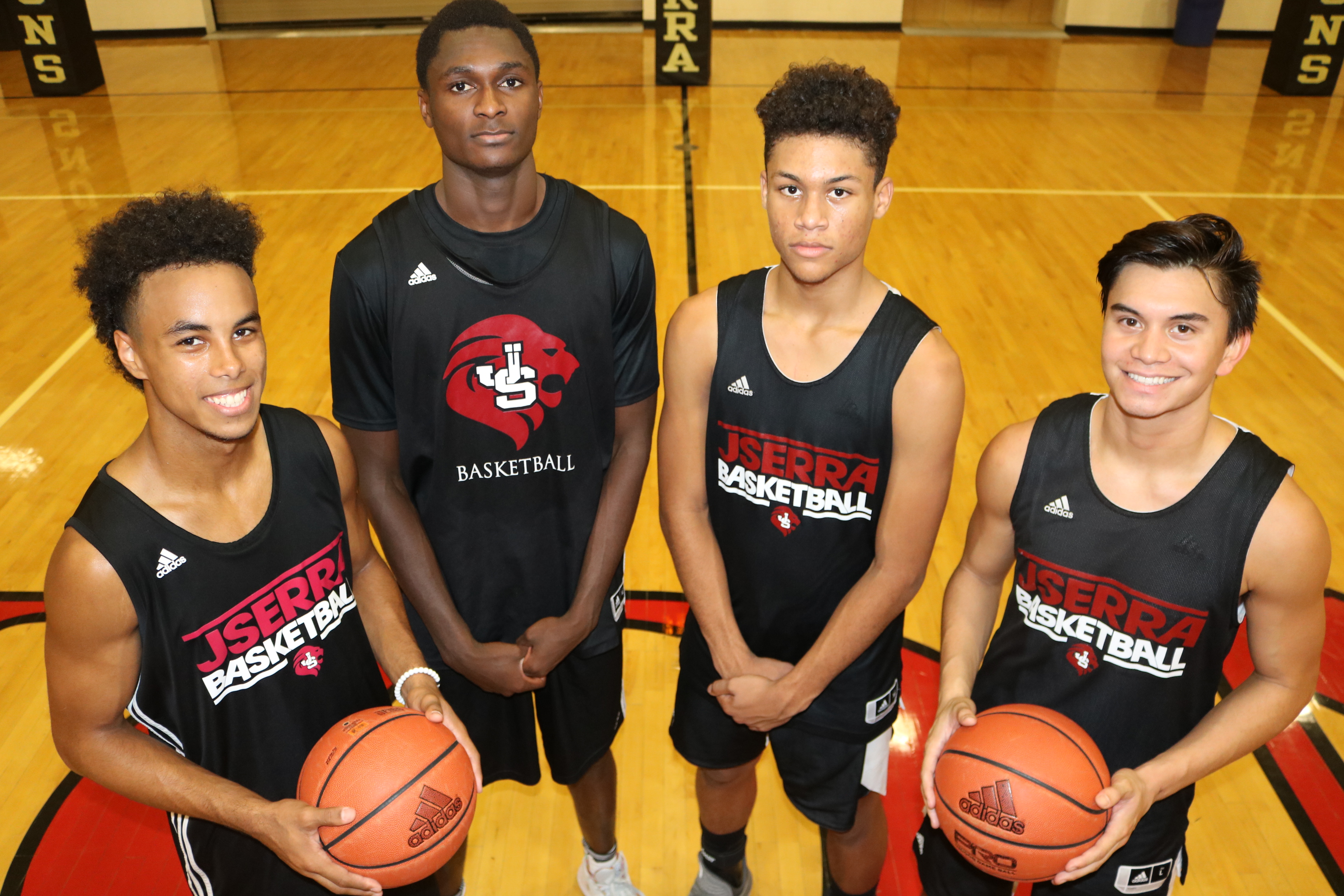 The winter high school sports season is about to get underway. In our annual preview, we highlight several San Juan Capistrano programs that are primed for big seasons on the court and on the field.

For in-game updates, scores news and more for all of the San Juan programs, follow us on Twitter @SouthOCsports.

When watching the JSerra boys basketball team practice this offseason, it’s easy to see why second-year coach Zach Brogdon and his team have high hopes for the new season.

The Lions are long, athletic and skilled, a potent mix of traits that could power the team toward the top of the Trinity League standings and into the CIF-SS playoffs for a second consecutive season.

JSerra lost its leading scorer, Sebastian Much, to graduation, but the Lions return plenty of impact players and picked up a few key transfers this summer.

Senior center Joel Mensah, who stands at 6-feet-11-inches tall, will be a focal point on both ends of the court. Mensah committed to San Diego State University this offseason and has developed his post moves as well as his midrange game, Brogdon said.

DJ Rodman is a marquee 6-foot-4-inch transfer from Corona del Mar that has made an impact on the team throughout fall practice.

JSerrra placed third in league last season and advanced to the quarterfinals of the CIF-SS Open Division Championships. They also appeared in the CIF Division 1 State Championships.

From the looks of it, the Lions are determined to continue their upward trajectory.

A trio of versatile playmakers will headline the San Juan Hills boys basketball team this season.

Ruiz and Soto offer coach Jason Efstathiou a unique pair of guards. Ruiz, who is 5-feet-9-inches tall, offers a hard-charging, quick-attack style, while Soto, who is 6-foot-4-inches, is more of a finesse player who can handle the ball extremely well. Both players can lead the team in scoring on any given night, Efstathiou said.

Efstathiou says players like Kitaen, and returning senior Brendan Gibson, embody the tough-minded approach to the game that has become the Stallions’ calling card since the veteran coach took over the program two seasons ago.

“We’re always scrapping, always hustling. We are a very grind-it-out type of team,” Efstathiou said. “It helps that we have some experience, but for the most part we’re pretty disciplined and I think that’s going to help us.”

The Stallions will be eying Capistrano Valley, the reigning league and CIF-SS champ, and Mission Viejo in the Sea View League.

The San Juan Hills girls soccer team graduated a considerable group of Division 1-bound seniors over the offseason and return a new-look group to start the winter season.

For the first time in four years, the Stallions will have a new goalie minding the net. Junior Amanda Haimes will be the team’s starting goalie after four-year starter Rylee Hanes graduated.

Coach Farrel Moore said the Stallions’ strength lies up top, where they field plenty of talent and speed. Senior Erin Sulfaro and junior Abby Hazen will be among the team’s primary forwards in charge of igniting the offense. Playing through the middle will be seniors Brinley Hawkins and Megan McClellan.

The Stallions placed second in the Sea View League last year and return to the competitive league again. San Juan Hills will be battle-tested in time for league play. The Stallions will open their season in the OC Winter Showcase Tournament at Beckman High School and play in the high-profile Excalibur Tournament over the winter break.

The St. Margaret’s boys soccer team will have the luxury of welcoming its entire starting lineup from one season ago to the pitch this year. It’s an enviable place to start from, considering this is the same Tartan team that won 19 games, the Academy League championship and appeared in the second round of the CIF-SS Division 6 Championships in 2017.

The Tartans fielded a potent offense last season, which figures to be even stronger this time around. St. Margaret’s scored an average of 3.5 goals per game last season. Leading the attack will be midfielder R.J. Egdorf, an all-league selection, and attacking midfielder John Leasure, the team’s leading scorer and assist man and an All-CIF-SS selection.

The Tartans were a young team last year that learned and got better as the season progressed, coach Adam Doty said. Now with a lot of experience they will be ready for another challenging schedule that features appearances in the Aliso Cup Tournament and high-profile matches against Division 1 opponents like San Clemente.

“Last year we didn’t have any starting seniors, but their strength was the fact they were up for the challenge. They worked hard and built chemistry,” Doty said. “Now we just have to build on that chemistry.”

Several incoming freshman and a few sophomores are competing for playing time, which has developed a good, competitive dynamic in offseason practice, Doty said.

In addition to the Aliso Cup Tournament in December, the Tartans will play in the Marina Holiday Classic before heading into Academy League play.

The Tartans were among the youngest squads in the Academy League last year and graduated just two seniors in the offseason. The team returns experienced players like four-year starter Ellie Jones and point guard Alexis Fintland.

The addition of the lacrosse players gives the Tartans above-average size, which Fava said they will use to their advantage on the boards. St. Margaret’s has always been a guard-heavy team in Fava’s 12 years at the helm, but this year their height ends that tradition.

“This year, my motto is ‘Let’s get shots up’, because I don’t think we’ll have a problem rebounding,” Fava said. “If we can get the ball up the court and get down there before everyone sets up (on defense) I think that’s going to be our advantage.”

The Tartans will also be looking to newcomers to make an impact, like freshman sharpshooter Alice Korolev.

The boys basketball team at Capistrano Valley Christian has become one of the more competitive small-school programs in Orange County over the past several seasons. They’ve done this despite going through several coaching changes.

This year, the six returning seniors on the team will play for their third head coach.

Chris Childress is now calling the shots on the Eagles’ sideline and he has credited the Eagles veterans with making the transition as smooth as possible.

“For them to accept me and work extremely hard for me has been humbling,” Childress said. “We have a good group and the biggest challenge is change. We have to incorporate my philosophy and the way I play in less than two months. But they’ve been great.”

The Eagles’ strength lies in the paint, where 6-foot-7-inch junior Festus Ndumanya and 6-foot-9-inch senior Jeff Yan will operate. Surrounding the Eagles’ bigs will be guards Troy Kihm, Colin Powers and Paul Stache.

Transfers Aron Frankand and Kevin Laws will look to make an immediate impact after sitting out the first 30 games of the season due to eligibility requirements.

The Saddleback Valley Christian girls basketball team will start the new season off with a new coach in Darren Gibson. Gibson, who was a coach of the Warriors lower-level team last season, and the Warriors have spent the offseason acclimating to the change and will open their season against Tarbut V’Torah on Thursday, Nov. 30.

Shelmidine, who plays point guard, has a chance to end her career at SVCS as the program’s all-time assist leader. The senior is close to breaking the current record, Gibson said.

Outside of Shelmidine and Hoshina, the Warriors are a young group. Two freshmen and a sophomore are slated to break into the starting rotation.

The Warriors do not have a lot of height on their roster, so Gibson has been stressing the need for the team to utilize their speed to counterbalance their lack of size.

“Our strength is our fight and tenacity,” Gibson said. “The girls want to do well and they know there’s an opportunity to do well here and succeed.”