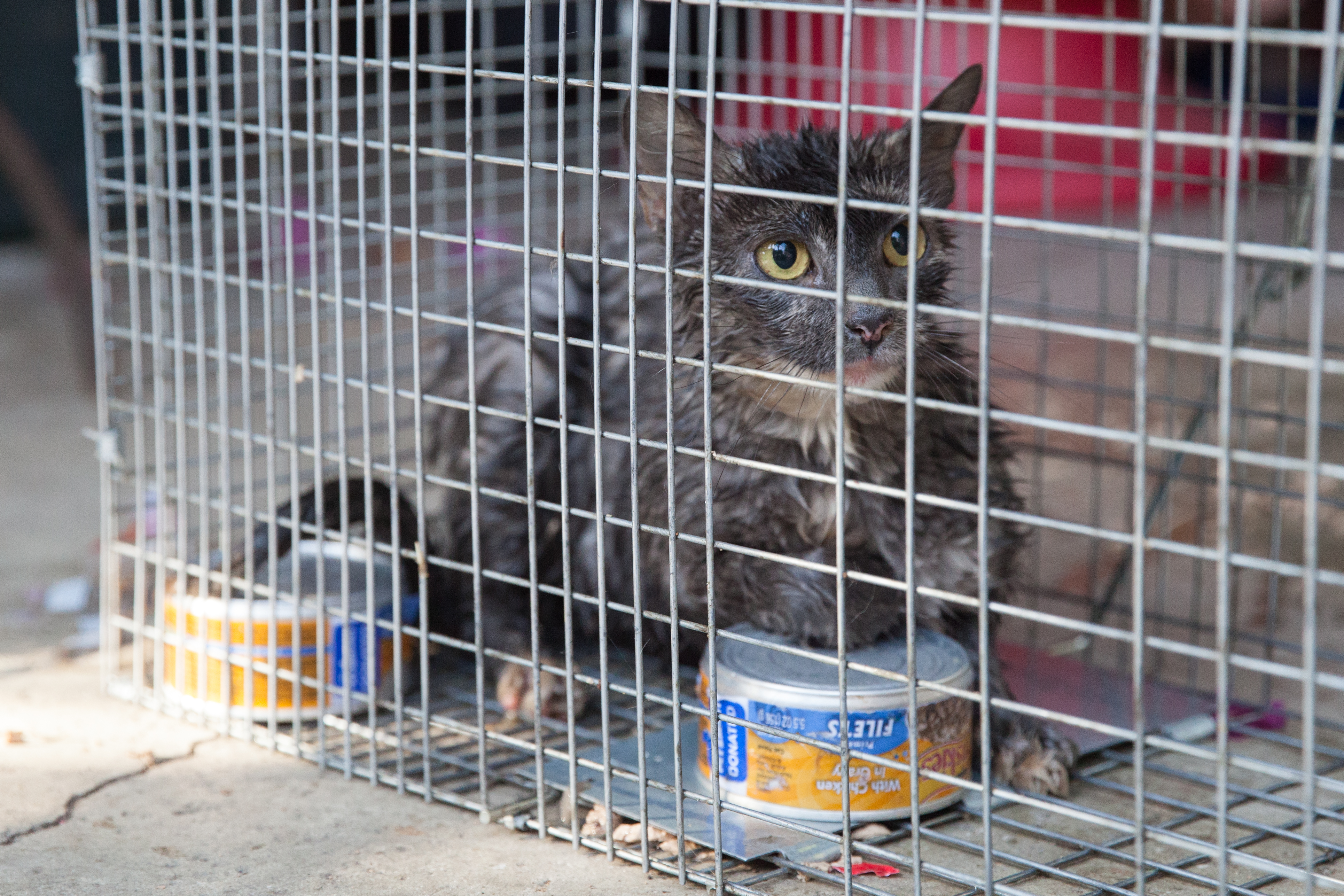 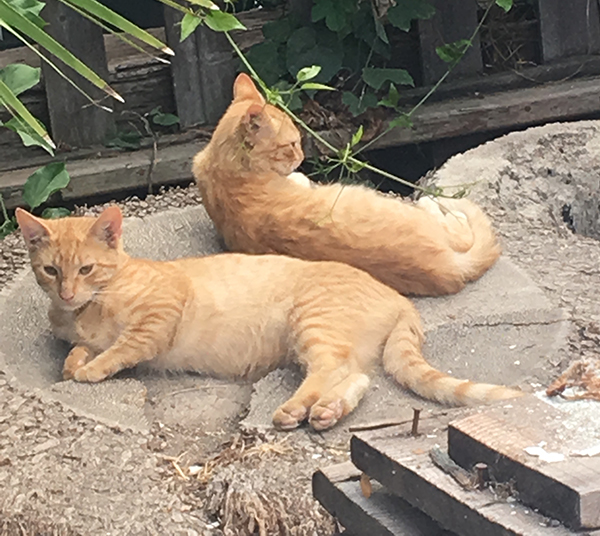 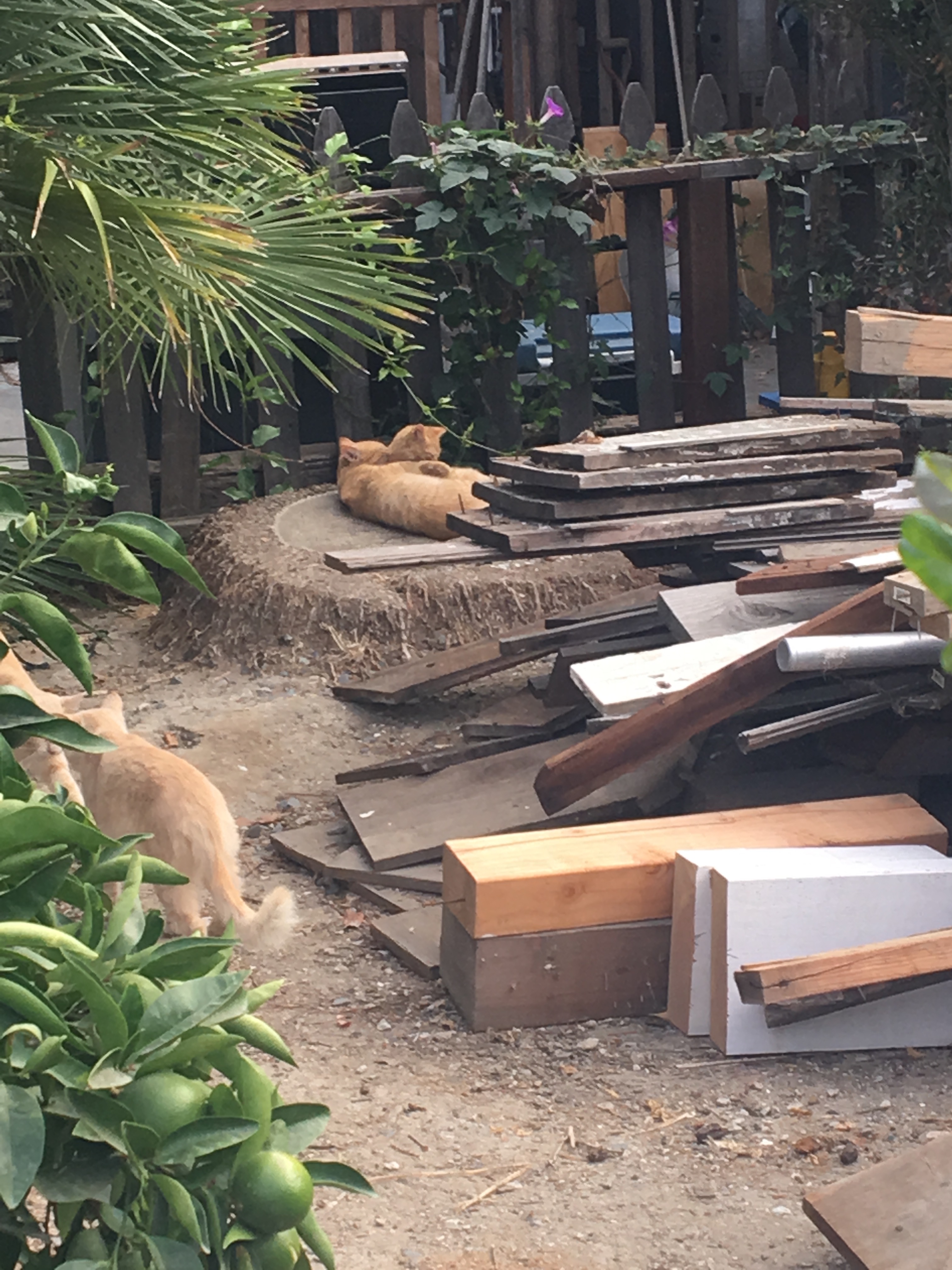 On Oct. 8, one of the oldest cats in the Los Rios colony (thought to be George the tomcat’s mother) was trapped. (She looks a bit wet because she had knocked over a bowl of water). The cat was set to be picked up by the county, spayed and treated, and ultimately returned to Los Rios Street. Photo: Allison Jarrell 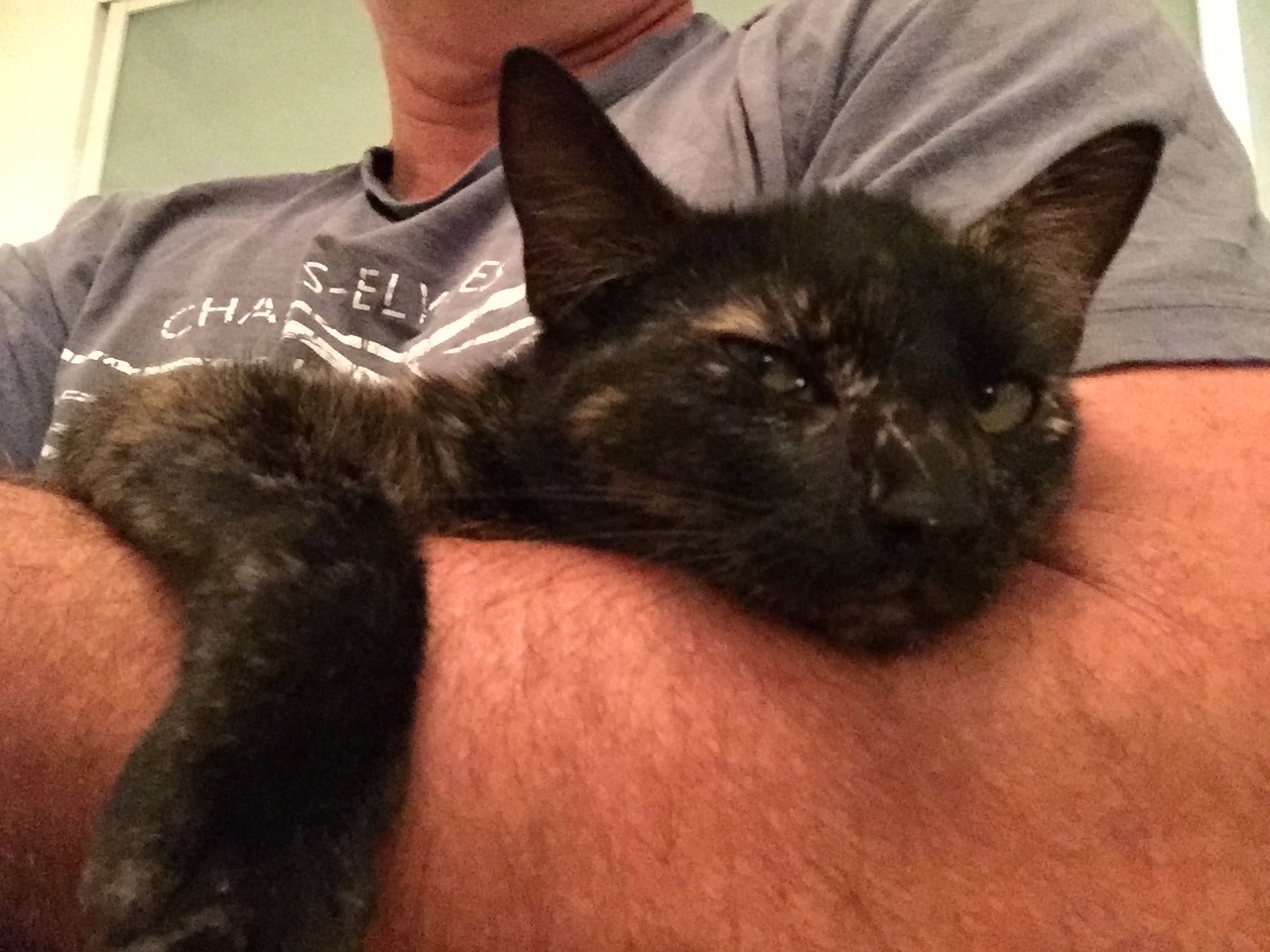 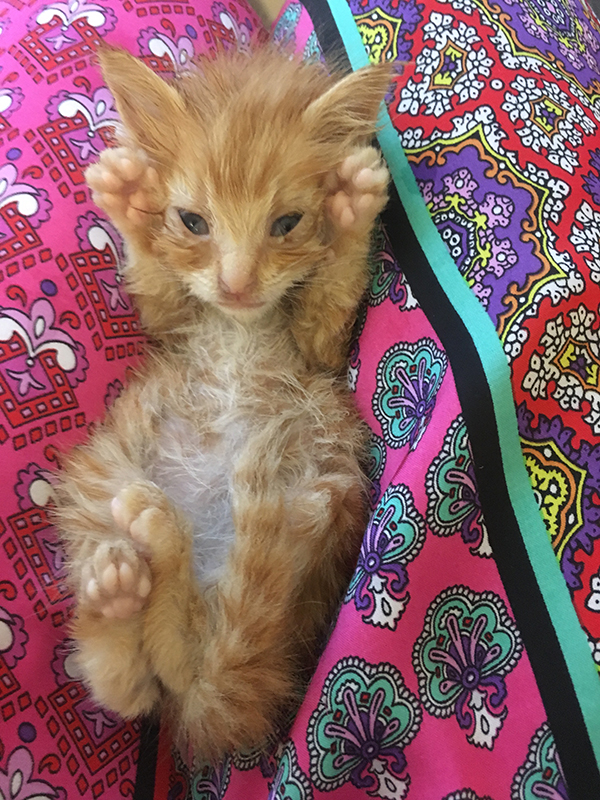 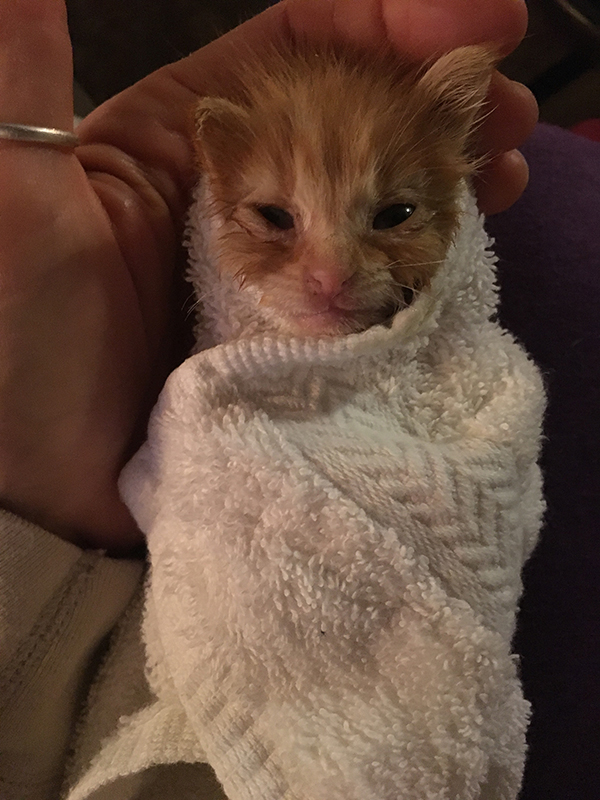 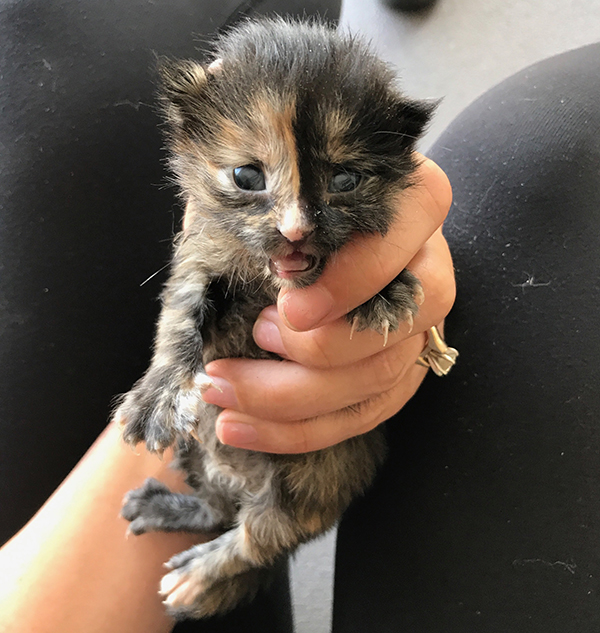 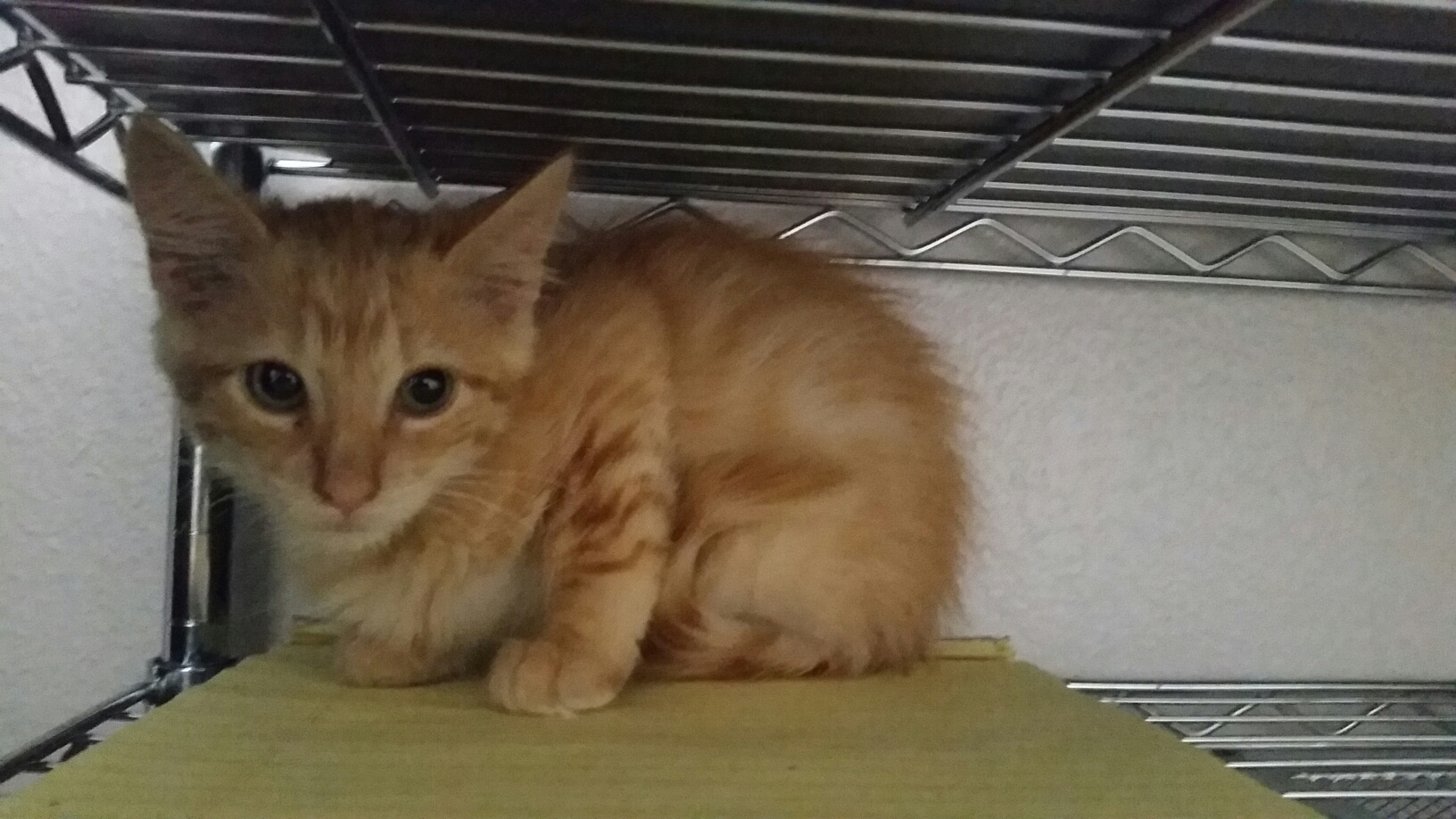 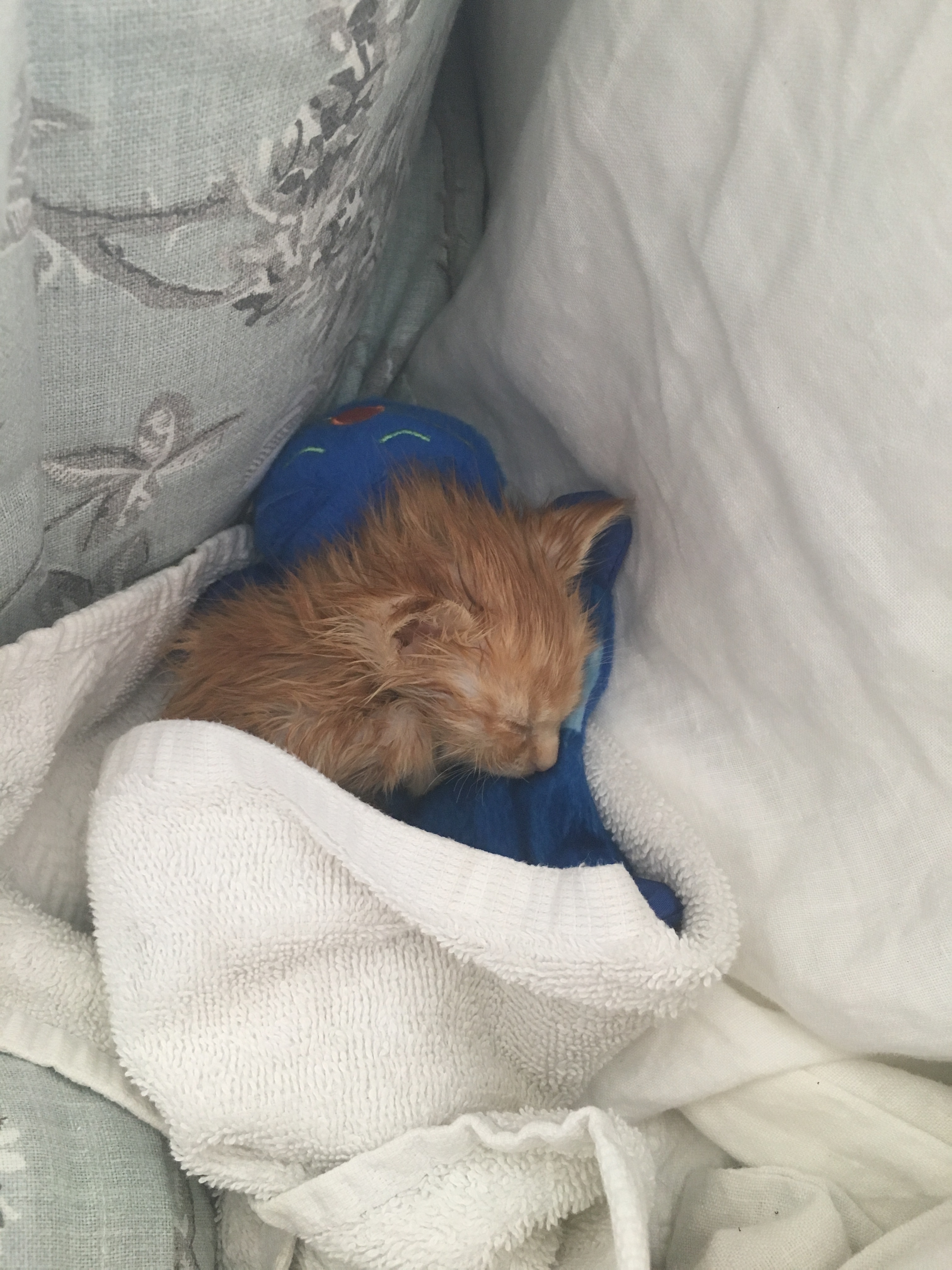 If you frequent Los Rios Historic District, perhaps you’ve noticed a clowder of orange cats roaming the street. They like to hang out on the Historical Society grounds and lounge around the Ito Nursery and other open lots, and they’re often accompanied by a large scruffy cat with big jowls.

“His name is George; we haven’t caught him yet,” Robin Morris said as she strolled along Los Rios on a recent Sunday morning. Morris, a resident of San Juan, is a board member and the cat coordinator for The Ark of San Juan, a local nonprofit that works to rescue companion animals and find them homes.

Morris said George (who she estimates could be about 9 years old) is the tomcat of a colony of generations of semi-feral cats that’s been growing in the area for years. The Ark has fielded more and more calls from concerned residents over the last few years about the proliferation of the cats, which she said has really revved up over the last six months with new litters being born.

Suelyn Ritsema, treasurer and secretary of The Ark, said the lineage of these cats dates back about 50 years.

“Appropriate to the rural character of San Juan Capistrano in the late 1960s, these cats were for many years recognized as ‘working animals’ or ‘barn cats,’ and have kept the rodent population under control,” Ritsema said. “Planned development is set to begin on the adjacent open lots, forcing the cats out into the surrounding communities and creating a feral problem that is not sustainable or healthy for the cats or the San Juan Capistrano community.”

With residents’ concerns and the welfare of the cats in mind, The Ark decided to embark on a large-scale rescue operation.

Morris noted that some residents living along Los Rios Street were upset that more hasn’t already been done by The Ark to help, but she said it wasn’t until about a month ago that the rescue was granted permission to operate on the Historical Society’s property. Once they were able to connect, Morris said Historical Society President Tom Ostensen was happy to let them onto the property.

“The volunteers working on the Silvas Adobe called us about an unhealthy situation there—they were finding fecal matter at the site, so we knew the cats had been there,” Morris said.

And with neighbors like the Ito Nursery allowing them access to private property as well, it’s been much easier to catch and rescue the cats. Morris said traps are left out with food and water and checked every hour by volunteers. If there isn’t a volunteer available on a certain day, then that trap isn’t laid.

Morris said she’s seen signs instructing people not to feed the cats, but she clarified that The Ark’s goal is not to starve the felines out of the area.

“Our goal is to catch and release the cats, or get them into good homes,” she said.

At the peak of the colony, Morris estimates there were about 45 or 50 cats. The Ark began taking in cats in September, and thus far they’ve rescued about 15 kittens and cats.

The cats they’ve seen roaming range from feral cats that were born around Los Rios Street and are part of the colony, to cats with collars that have apparently been dumped by their owners.

“Sometimes the colony will accept those cats, and sometimes they won’t, and you’ll find the emaciated ones with a collar alone in a corner,” Morris said. “We’ve found pregnant cats with collars on. Those cats don’t know the etiquette of the colony.”

Once the cats are rescued, Morris said The Ark does an assessment to see if the cat can be domesticated or if they’re feral.

“Initial capture and vetting of some of the cats has determined that, as a whole, the colony is extremely healthy and fairly well socialized,” Ritsema said.

If the cat appears to be a healthy cat capable of full socialization, they can go to a foster home, and after being spayed or neutered or they can be put up for adoption.

If a cat appears feral, The Ark calls the Orange County Animal Shelter, and the cat is spayed or neutered, provided with basic care, microchipped and brought back to Los Rios—part of the Orange County Shelter’s “Trap-Neuter/Spay-Release” program.

“These cats will continue as ‘working animals,’ in the Los Rios area,” Ritsema said.

“No cats are getting euthanized in this process,” Morris said. “The goal is to get a handle of this situation before more kittens are born. Our solution to the problem is to try to stop the long-term effects of the cats reproducing. But some will be coming back here and will be living out their lives. This is home to them; this is what they’ve always known.”

Morris said some residents may be disappointed that they aren’t removing the cats, but she said there are other residents and business owners who consistently rely on the cats’ work.

“We’ve gotten a handful of people who were upset that we were even doing this much, because there’s a huge vermin problem and the cats have kept it under control,” Morris said. “They want to know that those hunters will be back. And they will be.”

How to help The Ark

With only a handful of volunteers working on the rescue operation, Morris said The Ark is in need of people willing to donate their time. The Ark is looking for people to help check traps every hour, or residents willing to foster and socialize cats and kittens, including bottle feeding and weening younger kittens. Transport volunteers and pet adoption volunteers are also needed.

The Ark is also in need of financial support, as they have not been able to secure funding from the city or other organizations. The Ark is relying on donations and fundraising to cover the medical costs of the cats.

Anyone interested in adopting a “Legacy Cat of Los Rios,” can view the cats online, at The Ark’s adoption events, or inquire directly about the available cats currently in foster care.

For more information on the cats or contributing to the rescue operation, visit www.arkofsanjuan.org. 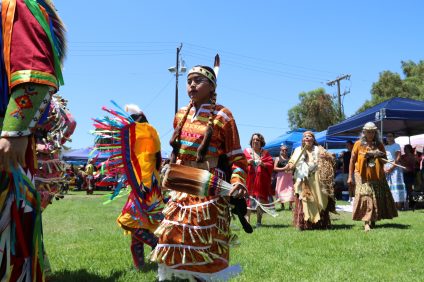