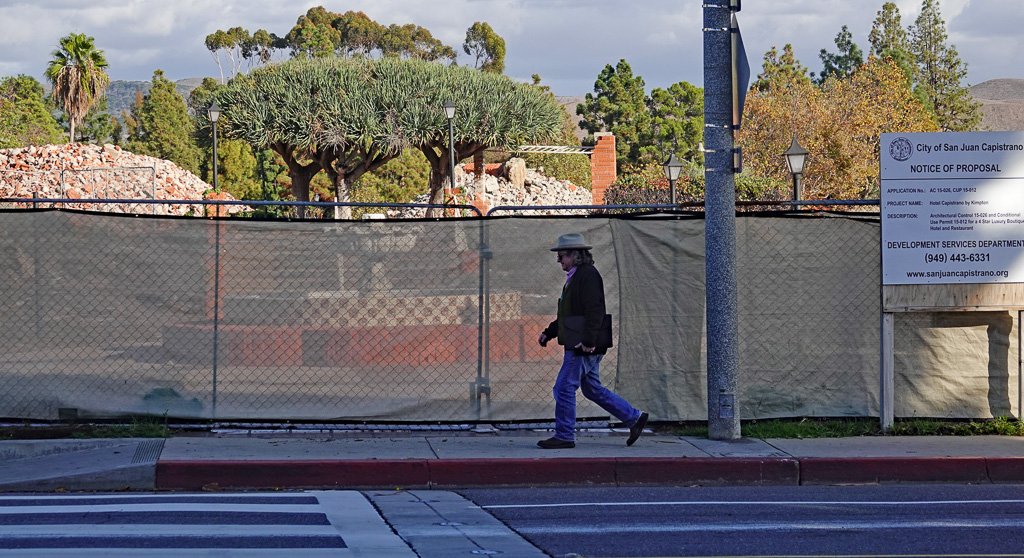 This will be a single-purpose LLC, Almquist said. “Tony and I have worked on things in the past,” he said. “I have a tremendous amount of respect for him and the ranch. They really do care a great deal about San Juan.”

The parcel, located along Camino Capistrano at the intersection of Forster Street, won City Council approval in 2016 for a Hotel Capistrano by Kimpton. But the project has since been tied up in a lawsuit challenging the city’s approval.

“It’s obviously unfortunate, the litigation,” Almquist said. “Our goal is to make this positive, moving forward. We sincerely want to be good stewards of the property. We want what’s best for the city.”

Mike Balsamo, RMV’s senior vice-president of government relations, said the ranch is “excited about the opportunity.” He praised improvements the city has made to the downtown and said the ranch already holds other investments downtown, including El Adobe, the Swallow’s Inn and Mission Promenade.

“This is a continuation of other properties that we own downtown, investments we’ve made in the community,” he said. “We think the downtown location has fantastic potential. We love the character of the community.”

Asked if the new owners of the Kimpton site are looking to see the current Kimpton hotel plan through to fruition, modify it or pursue something else, Balsamo said it is too early to say.

“We are just in evaluation mode,” he said. “We don’t have any specific plans at this point in time. All options are on the table.”

In March, an Orange County Superior Court judge ruled against the city in the lawsuit filed by Bill Griffith, who owns adjacent properties on Camino Capistrano and is the developer of a rival downtown hotel project, 124-room Plaza Banderas on Ortega Highway next to Mission San Juan Capistrano.

Griffith’s suit challenged the city’s approval of the Kimpton hotel on grounds that it was inconsistent with the city’s general plan and building allowances. Griffith said he wants whatever is built there to fully conform to codes and the general plan.

The city and O Properties have appealed the court’s ruling. The city has asserted that its approvals were proper. Opening briefs for the appeal are due Dec. 31, said Jacob Green, assistant city manager, via email.

The city, meanwhile, is working to resolve inconsistencies between the Historic Town Center Master Plan and the San Juan Capistrano General Plan.

Green said that the city “has had preliminary discussions with the new property owner” but could not say more.

Oedekerk could not be reached for comment about the sale. Almquist said that Oedekerk approached him several months ago about purchasing the site.

“We have given Steve our word that we fully intend to be good stewards of the property and see it through to development,” Almquist said in a statement.

He said the new ownership is continuing to talk with Kimpton while exploring options and preparing to work with the city.

Mayor Sergio Farias said he wishes the new owners well. He called it unfortunate that Oedekerk, a local resident and landowner whose background is Hollywood entertainment, not development, found himself involved in protracted litigation over a project the city wanted, a project he had envisioned to benefit the city.

“He was trying to do the right thing for the town,” the mayor said.

“Steve really does have a heart for the city,” Almquist said.

Farias said he continues to hope the new group will be able to bring in a quality 4-star boutique Kimpton hotel to the site.

“They are very experienced developers,” he said. “They know what they are doing.” —Fred Swegles