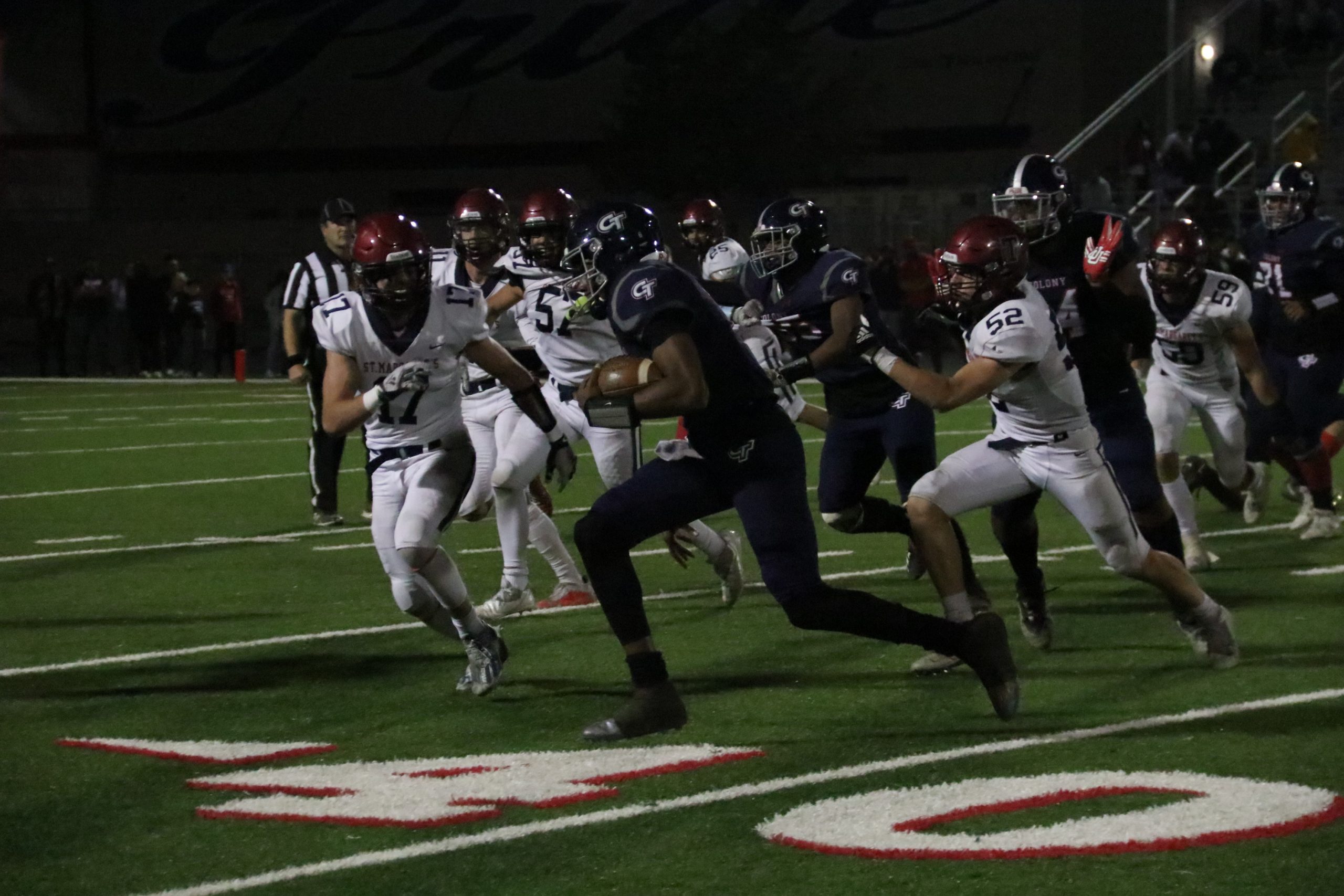 ONTARIO – The St. Margaret’s football team finally met an opposing offense that could keep stride-for-stride with the Tartans

Colony of Ontario and St. Margaret’s traded haymakers in the first half. Halftime was necessary for everyone in attendance to catch their breath, as Colony snuck in another score in the final minute for a 35-28 lead. Again, that was just the halftime score.

Then St. Margaret’s finally faltered, and Colony pounced on the opportunity with speed.

Colony broke the game open with big plays by Bryce Strong, including an interception, an 89-yard touchdown run and a 42-yard touchdown run, to build a three-score lead, hold off another late St. Margaret’s charge and win the CIF-SS Division 9 championship on Friday, Nov. 26, at Colony High School in Ontario.

“We just didn’t come out with the pizazz that we needed (in the second half), and tried to get a stop and missed some tackles,” St. Margaret’s coach Kory Minor said. “We had them third-and-long, missed tackles and they get the first down. It’s hard to win those kinds of games against teams playing this good.”

“At the end of the day, my young men fought, fought hard, fought valiantly. Today just wasn’t our day.”

Colony (8-6) won its first CIF-SS championship since 2014, and the Titans will move on to the CIF State Regional playoffs likely in Division 4A.

Colony was backed by two stellar performances by senior running back Strong and Arizona-bound receiver-turned-quarterback AJ Jones. Strong carried the ball 12 times for 170 yards and two touchdowns, including the 89-yard burst after pulling in an interception on defense and a 42-yard score after a fourth-down stop. Jones completed only 8 of 14 passes for 203 yards and four touchdowns and ran 12 times for 84 yards and a 37-yard touchdown.

St. Margaret’s (9-5) was playing in its first CIF-SS title game since 2014, and the Tartans took home the silver runner-up plaque.

“Listen, I’ve got a school of 400-some kids, a COVID year of 17 kids that played on the team, we’ve got 34-35 guys out here and half of them are freshmen,” Minor said. “We weren’t supposed to be here. The battle, the fight, the sportsmanship, the hard work, the dedication. I’m so proud of this team. I’m proud of who they are and what they have become. It’s a blessing.”

St. Margaret’s went just 1-2 in that pandemic-delayed spring season Minor mentioned with just 17 players on the roster. The Tartans began this season 2-4 playing a freelance schedule with no league and no guaranteed playoff berths. St. Margaret’s rallied for seven straight wins that carried the Tartans into the playoffs and to the Division 9 Final.

“It’s mixed feelings,” St. Margaret’s senior lineman Trey Kingsley said. “I’m so proud of these guys, the way they fought all season, the adversity we went through. It sucks. When the clock hits zero, it’s that realization that we’re not playing another game of football. I’m really proud of how far we came.”

The opening of the second half was a game unto itself.

Colony opened with the ball and a chance to break the game, but the St. Margaret’s defense stepped up and did exactly what it needed to do. The Tartans made a third-down stop, and Colony attempted a fourth-down conversion at its own 33-yard line. Colony attempted to gain one yard with a defensive lineman, but St. Margaret’s met the challenge to force the turnover on downs.

St. Margaret’s had its shot to tie the game back up, but Strong challenged a pass to the goal line and came up with an interception at the Colony 2-yard line.

Two plays later, Strong fought off St. Margaret’s defenders and burst forward for 89 yards, a touchdown and a two-score lead for Colony, 42-28.

On St. Margaret’s next drive, the Tartans themselves went 4-and-out, and it was Strong again with the game-breaker and ultimately the game-winner. Strong took the ball left and faced a wall of Tartans, reversed field, gained the edge and ran for a 42-yard score. Colony led, 49-28.

Despite a now 21-point deficit, St. Margaret’s got right back on the horse. Ruff completed 10 passes on a 10-play drive, including a 2-yard touchdown to Stahl.

The Tartans again got a stop, and five plays later, it was Stahl to Smith on a 23-yard play down the St. Margaret’s sideline. The 21-point deficit was down to eight points with just under five minutes to play.

“I think we all just had to dig deep,” Kingsley said. “We’ve had many games where second half we had to make adjustments, but we fought and gave it all we could.”

St. Margaret’s again forced a 3-and-out, and the Tartans had their opportunity with 2:46 remaining. However, Colony came up with its third sack of the night to push St. Margaret’s back, and despite connecting on a fourth-down screen, the Tartans only got 11 yards on the 4th-and-15.

Colony kneeled the ball and claimed the Division 9 title, 49-41.

To open the game, St. Margaret’s scored on its first four drives with a 1-yard touchdown run by senior Benton Barlow, a 24-yard pass from Ruff to Smith, a 2-yard swing pass to Barlow and a 23-yard touchdown pass to Stahl.

Colony scored on its first two drives before the Tartans got their first stop, but that didn’t stop the Titans. Colony scored three straight touchdowns to end the half, including a 14-yard pass with 10 seconds left for a 35-28 lead at the break.