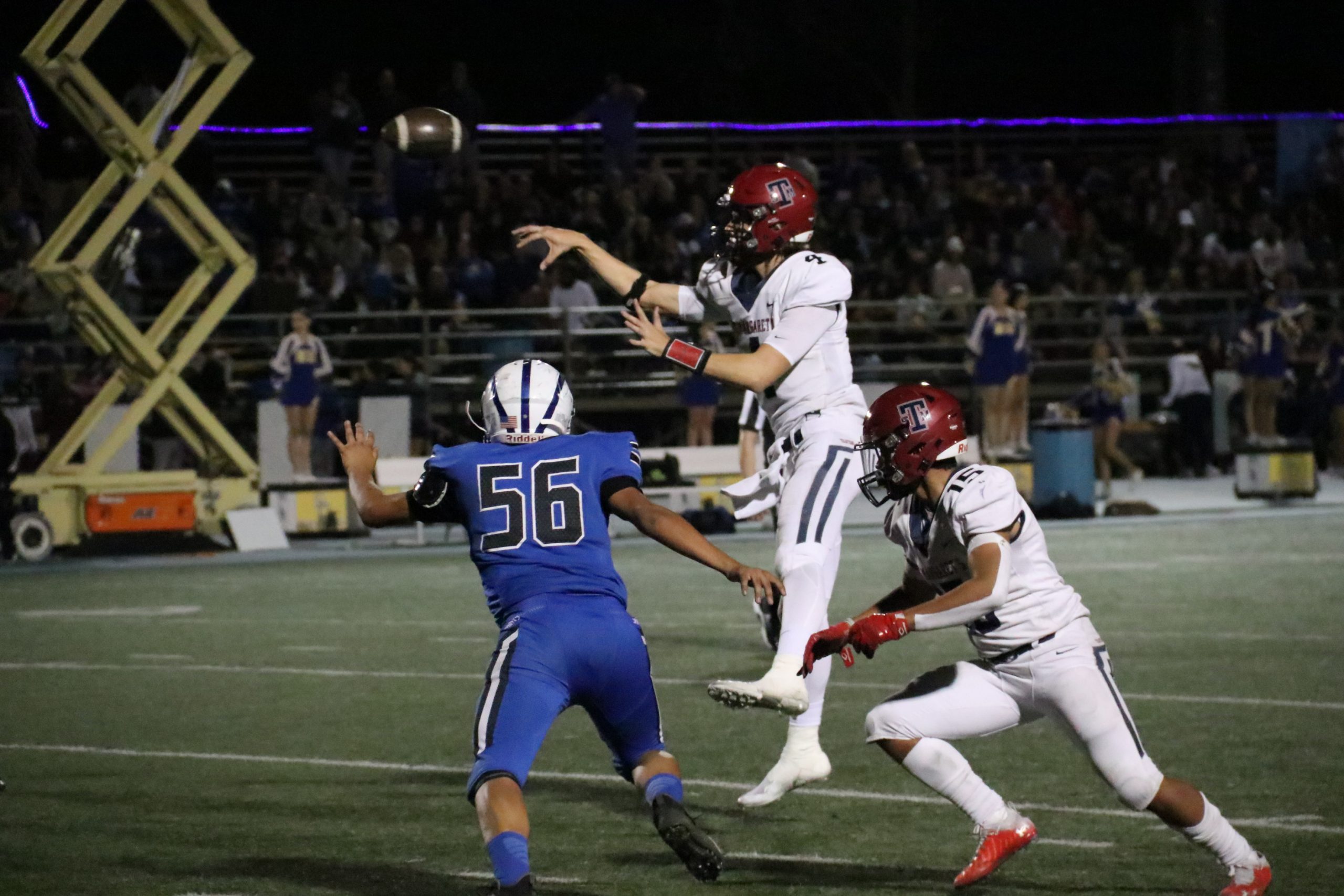 St. Margaret’s Football Dominates First Half, Holds on at San Dimas to Advance to Division 9 Semifinals

SAN DIMAS – While the Tartans football team might’ve shed the “little old St. Margaret’s” façade over the last two decades, the 2021 Tartans could be considered “under the radar” as a 6-4 freelance team coming into the CIF-SS Division 9 playoffs.

St. Margaret’s isn’t hiding. In fact, the Tartans are soaring with one of the hottest offenses in CIF-SS football.

Senior quarterback Jack Ruff threw four touchdown passes, and senior receiver Will Stahl caught three touchdown passes and threw a TD pass of his own, as St. Margaret’s dominated the first half for a 35-7 lead at the break. Ultimately, the Tartans held off a late charge by No. 4 seed San Dimas to win this Division 9 quarterfinal, 38-28, on Friday, Nov. 12 at San Dimas High School.

“Resiliency, that’s all it is, man,” St. Margaret’s coach Kory Minor said. “These guys have been around together for a long time. Resiliency, toughness, staying locked in. Listen, that’s a good football team over there. They challenged us, pushed us to our limits, we fought through it, but hats off to them.”

St. Margaret’s (8-4) advances to the CIF-SS semifinals for the first time since 2017, and the Tartans will host Claremont next Friday, Nov. 19. Claremont beat No. 1 seed Laguna Beach, 38-7, in the quarterfinals.

“It’s amazing, right?” Minor said of getting the Tartans to the semifinals for the first time in his tenure as head coach. “It’s awesome to get back there. We’re going to be at home, which is a great feeling too. We’re going to enjoy this win today, and tomorrow, we’ll get on Claremont.”

St. Margaret’s was incredibly efficient in building its lead and shutting down San Dimas (8-4).

San Dimas pushed hard for a comeback in the second half by opening with an onside kick recovery and scoring all three times it had the ball. However, San Dimas has a ground-focused attack with the wing-T, which ate up a lot of clock.

St. Margaret’s only had the ball three times in the second half: a three-and-out, a field goal and running out the final six-plus minutes of game time to seal the win.

“One thing about the Wing-T, listen, I’m a Notre Dame guy,” Minor, a former linebacker for the Fighting Irish said.  “We played Army, Navy, Air Force. (I know) you’ve got to capitalize when you’ve got the ball. It’s not going to happen very often. Listen, we’ll take it.”

San Dimas ran the ball 36 times for 185 yards and three touchdowns, and the Saints threw one touchdown pass with 5 of 7 passes completed for 84 yards.

Part of the San Dimas comeback was spurred by second-half penalties by St. Margaret’s. The Tartans were assessed 10 penalties for 86 yards.

San Dimas opened the game with an 11-play drive that put the Saints ahead, 7-0.

In the second quarter, Ruff hit Stahl on a 5-yard touchdown pass, and St. Margaret’s recovered a fumble on the ensuing kickoff. Ruff then threw a 25-yard touchdown to Smith for a 28-7 lead.

St. Margaret’s closed the first half with a lengthy 13-play drive with a 9-yard TD pass from Ruff to Stahl with five seconds remaining before halftime.

San Dimas came out in the second half determined to not go away so quickly. The Saints recovered the onside kick to open the half and scored six plays later on a touchdown run.

San Dimas forced a three-and-out on St. Margaret’s next possession, and 10 plays later, the Saints scored to make it a two-score game, 35-21.

St. Margaret’s tacked on a 31-yard field goal at the end of the third quarter to close their scoring, 38-21.

San Dimas’ next drive was a six-minute clock eater, but the Saints still got on the board with a 12-yard run to cut the deficit to 10 points, 38-28.

But that was the last time San Dimas touched the ball, as the Tartans ground out their own six-minute drive with three third-down conversions to wind down the clock and advance.