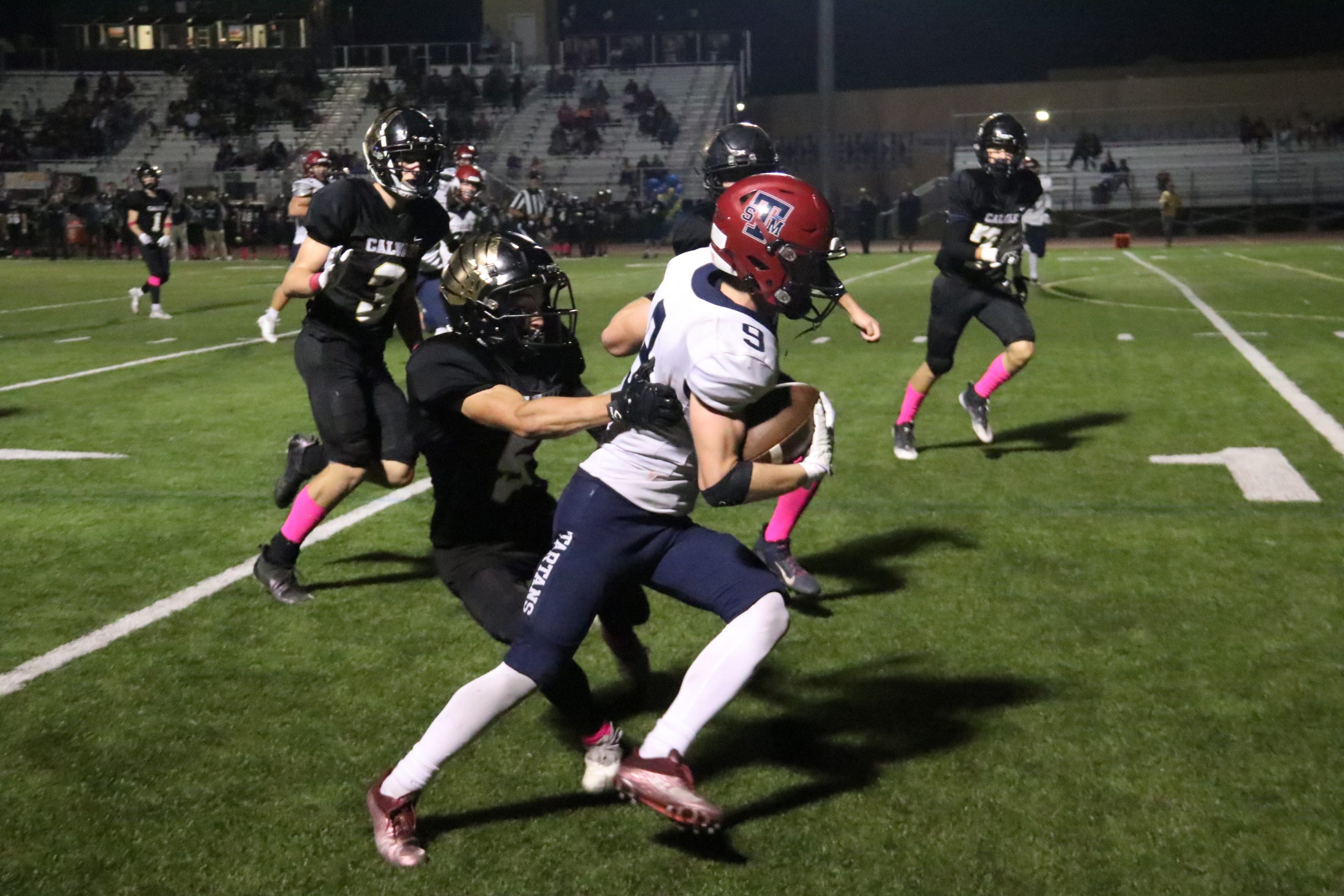 SANTA ANA – Despite an 0-6 start, including a 0-2 start in its first season in the large public school-filled Orange Coast League, the St. Margaret’s football team had clawed its way back for one final opportunity to clinch a CIF-SS playoff berth.

Thursday night, Oct. 27, at Segerstrom High School set up the same way for both the visiting Tartans and host Calvary Chapel. Win, and you’re in. Lose, and go home.

St. Margaret’s won, and the Tartans are going to the CIF-SS playoffs.

St. Margaret’s got two touchdowns and two interceptions from senior Sam Dunnell, a 96-yard pick six from Owen Binder and a 13-yard interception touchdown from Maverick Young to shut down Calvary Chapel in the second half of a clinching victory, 49-22, to claim the third and final CIF-SS playoff berth from the Orange Coast League.

“At the end of the day, it’s all about these young men and young women,” St. Margaret’s coach Kory Minor said. “Their fight, their tenacity, their toughness, their resiliency, this coaching staff putting a plan together. This is a total team effort across the board. There’s no superstars. We’re all in this thing together.”

St. Margaret’s (4-6, 4-2) clinched its 21st consecutive CIF-SS playoff berth. The Tartans advanced to the Division 9 Final last season, and St. Margaret’s will likely slot into Division 12 when the CIF-SS divisions and brackets are revealed on Sunday, Oct. 30, at 10 a.m.

The CIF-SS playoff field is organized by the CalPreps computer algorithm ratings after the regular season is complete.

Without the league’s automatic playoff berth, Calvary Chapel (4-6, 3-3) will most likely miss the playoffs, as teams with winning records are given priority over ones with losing records for at-large applications, no matter the CalPreps rating.

After starting the season 0-6, the St. Margaret’s offense caught fire down the stretch as the Tartans got healthier. Dunnell and senior Derek Smith returned from injuries, and St. Margaret’s scored 44 points or more in each of its final three games.

“It’s kind of just a momentum thing,” Dunnell said. “Every win we just build on it. We’re obviously getting all of our players back. We got Derek back. We got me back. We really just turn it up at practice, and we’re able to deliver it on game days.”

Junior quarterback Max Ruff completed 12 of 18 passes for 209 yards and three touchdowns. Ruff’s first pass from scrimmage went out right to Dunnell, who sprinted the ball up the Tartans sideline on a 67-yard score. Dunnell caught four passes for 107 yards and two scores, and Smith caught six passes for 83 yards and a touchdown.

While the Tartans eventually cruised to the victory, the game did not open so cleanly.

On the opening drive of the game, Calvary Chapel converted on a 4th-and-6 and threw a 58-yard touchdown pass on a 3rd-and-22 to land the first strike of the game, 7-0.

St. Margaret’s immediately evened the score with the Ruff-to-Dunnell 67-yard score, but Calvary Chapel swung right back three plays later on a 79-yard over-the-top TD pass to regain the lead, 14-7.

The ensuing Tartans drive was lengthy and more under control, but Calvary Chapel stuffed St. Margaret’s on the 1-yard line on fourth down to deny another equalizing score.

After getting a stop and short Eagles punt, St. Margaret’s capitalized on its field position. Ruff hit Smith on a 37-yard catch-and-run and once more on a two-yard touchdown score to even the game, 14-14.

Later in the second quarter, the Tartans grabbed the lead at the end of an 11-play drive on a two-yard TD pass from Ruff to Dunnell with 43 seconds left in the half. On the other side of the ball, Dunnell pulled down an interception as the half expired to hold onto the lead, 21-14.

Calvary Chapel nearly gave St. Margaret’s déjà vu to open the second half. After a Tartans 3-and-out, the Eagles carried out a methodical 11-play drive, including a fourth-down conversion. However, on the next set of downs, Binder swung the momentum completely back to the Tartans.

Binder nabbed an interception at the St. Margaret’s 4-yard line and found blockers as he crossed the field and completed the 96-yard marathon for the two-score lead, 28-14.

St. Margaret’s converted a fourth-down on its next drive, and after a 35-yard connection between Ruff and Binder, Ruff buried in the 1-yard sneak for a 21-point lead early in the fourth quarter.

Dunnell intercepted Calvary Chapel on the next drive, and following a 33-yard run by Andrew Miehe, Ruff drove in a 2-yard score. Miehe finished with 84 yards on nine carries.

Just 52 seconds later, Young tacked on St. Margaret’s final score with a keen interception and a 6-yard waltz into the end zone for the 49-14 lead.

Calvary Chapel salvaged one last touchdown pass and a two-point conversion with 20 seconds left to round out the game, 49-22.