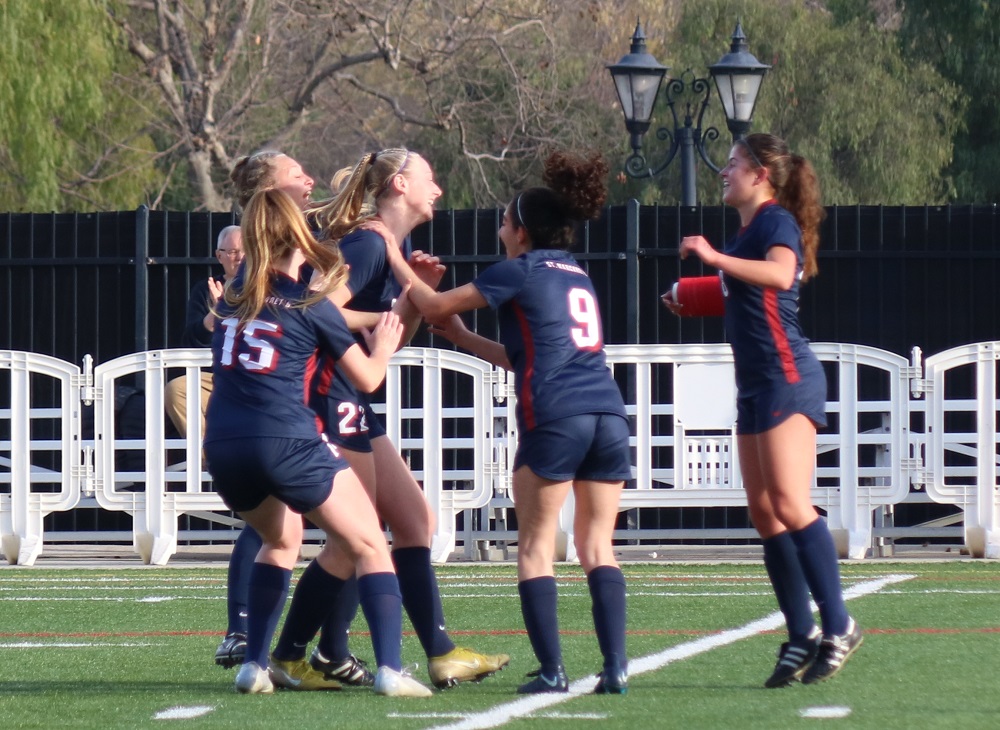 The Tartans showed no ill effects in their CIF Southern California Regional opener on Tuesday.

St. Margaret’s absolutely dominated possession from the opening kick-off and allowed only one shot, a free kick not on target, in a 4-0 win over Roosevelt of Los Angeles in a Division IV first-round game at St. Margaret’s Episcopal School.

“Good team win,” St. Margaret’s coach Johnny Marmelstein said. “Everybody got to play. It was a good effort on everybody’s part. Even after the subs went in, we still created a lot of chances to score.”

St. Margaret’s (21-2-4) got an impressive 30-yard free kick goal from junior Charlotte Jones in the 10th minute and followed up with a deft deflection inside the near-right post by sophomore Taylor Nock in the 13th minute for a 2-0 lead.

Junior Juliet Ballard scored two goals with a strong individual effort down the left side in the 25th minute and a long shot inside the near-left post in the 41st minute for the four-goal advantage.

“I’m proud of the kid because they refocused really quick,” Marmelstein said. “We had a good practice yesterday, and what’s behind us is behind us. We’re looking forward to tomorrow’s practice, and from there, we’re going to look forward to the game on Thursday at home.”

What was behind the Tartans was a tough-to-swallow CIF-SS Division 4 championship on Saturday, Feb. 23 at La Salle High School in Pasadena. It was a result that has St. Margaret’s motivated going forward.

Through three rounds of kicks, La Salle led, 3-2, with St. Margaret’s shooting first in each round. St. Margaret’s didn’t convert its fourth kick, La Salle celebrated, and the referees prematurely awarded the game to La Salle.

La Salle still needed to make another kick, or if they missed, St. Margaret’s would have another opportunity to tie in the fifth round. However, the referees had ended the game. Celebrations by La Salle and disappointment for St. Margaret’s ensued as the championship plaques and t-shirts were handed out.

While that was occurring, there was discussion happening as all those involved and the referees began to realize what actually happened. The teams had returned to the locker rooms before a final decision could be made, and when it was, the referees retrieved the teams from the locker rooms and told them another kick had to be attempted.

The teams filed back onto the field, and La Salle attempted and made the final kick to officially end the championship game.

“Initially, when I saw (La Salle) celebrate, I was more concerned with comforting my players,” Marmelstein said. “Then one of my players said the count was wrong, and then I started going in my mind. So I went to their AD (athletic director), and while the ceremony was going on, I said, ‘I don’t think this, the score is wrong.’ He was great and went to get the referees who had figured it out themselves.”

It was certainly a strange evening for the Tartans. In the penalty shootout, St. Margaret’s made a save on La Salle’s first kick, but the referees determined something was wrong with the attempt. La Salle kicked again and scored. During the game, a St. Margaret’s goal was called back, and four minutes after the Tartans took the lead late in the second half, La Salle was given a penalty shot, which it converted to tie with eight minutes remaining.

If both teams win on Thursday, St. Margaret’s and La Salle could meet again in the CIF SoCal Regional Final at La Salle on Saturday. La Salle, the No. 1 seed in Division IV, was given a bye in the first round and hosts Westridge on Thursday.

“We’ll play whoever,” Marmelstein said. “Yes, we’d like to play La Salle. First, we have to have a good practice tomorrow. We have to play whoever on Thursday and play them tough.”