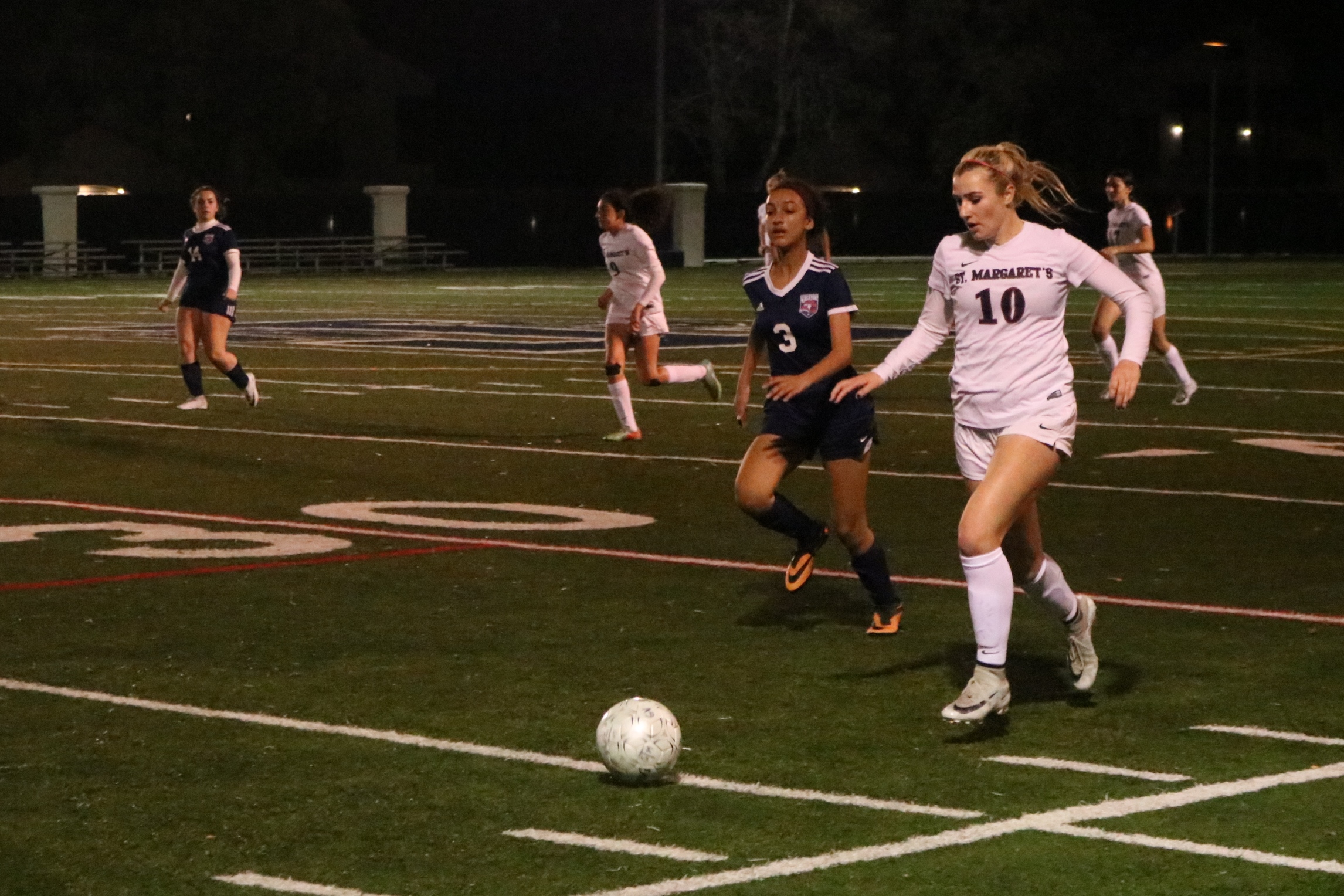 The field at St. Margaret’s can be quiet, almost serene.

Tucked in amongst the school, San Juan Capistrano businesses and trees, it’s a quaint and hard-to-find example in the bustling, big time Orange County sports scene.

Bam! One goal, like the thunder of a double bass drum.

Bam! Bam, bam, bam! Onto seven goals and a lead guitarist’s ripping solo in a shutout win for St. Margaret’s over Oxford Academy on Jan. 10.

This is the style of play for the Tartans girls soccer team, who has rocked their pressuring style to a 19-game Academy League unbeaten streak and will go for 20 against rival Sage Hill on Friday, Jan. 12.

“We press the whole game,” St. Margaret’s coach Johnny Marmelstein said. “We try to make it very difficult for teams to play out. People want to play and knock the ball around a little bit. They want to play pretty soccer.”

The style is called counter-pressing and currently and most famously being used by the manager of Liverpool in the English Premier League, Jurgen Klopp.

“Klopp, who’s kind of the proponent of this style, gegenpressing, talks about Arsene Wenger at Arsenal,” Marmelstein said. “He says Arsene wants to play a symphony, and I want to play metal.”

It’s a kind of play that keeps teams on their toes. It’s also not an anti-possession style, but it is effective against teams that like to play pretty possession.

“We just say let’s get the ball behind them. Let’s get into their half.”

The Tartans have done that after a little holiday break struggle against a tough schedule. St. Margaret’s went out to the Arizona Showcase and took back a 1-2 record with only one goal for and five against.

In league, St. Margaret’s has outscored its three opponents, 24-0. The Tartans also mixed in a shutout against Francis Parker of San Diego.

“We were putting together halves of the game,” Marmelstein said. “We just weren’t putting together full games. I just told the girls at halftime (against Francis Parker) we have to put together an 80-minute game, and we did that.”

St. Margaret’s is getting full games from its full team.

While sophomore Ella Kang was a standout against Oxford Academy with three goals and two assists, sophomore Juliet Ballard came back from injury to score the first goal and Northwestern-bound senior Lauren McCaffrey scored. Junior Lauren Otterbein scored a goal, and freshman Bryce Chang capped the game with the seventh goal.

Things are clicking at the right time for the Tartans with the meat of their league schedule coming up, and their always lofty goals ahead of them.

“For 18 years, the goals don’t change a whole lot,” Marmelstein said. “We want to win league and we want to win CIF.”