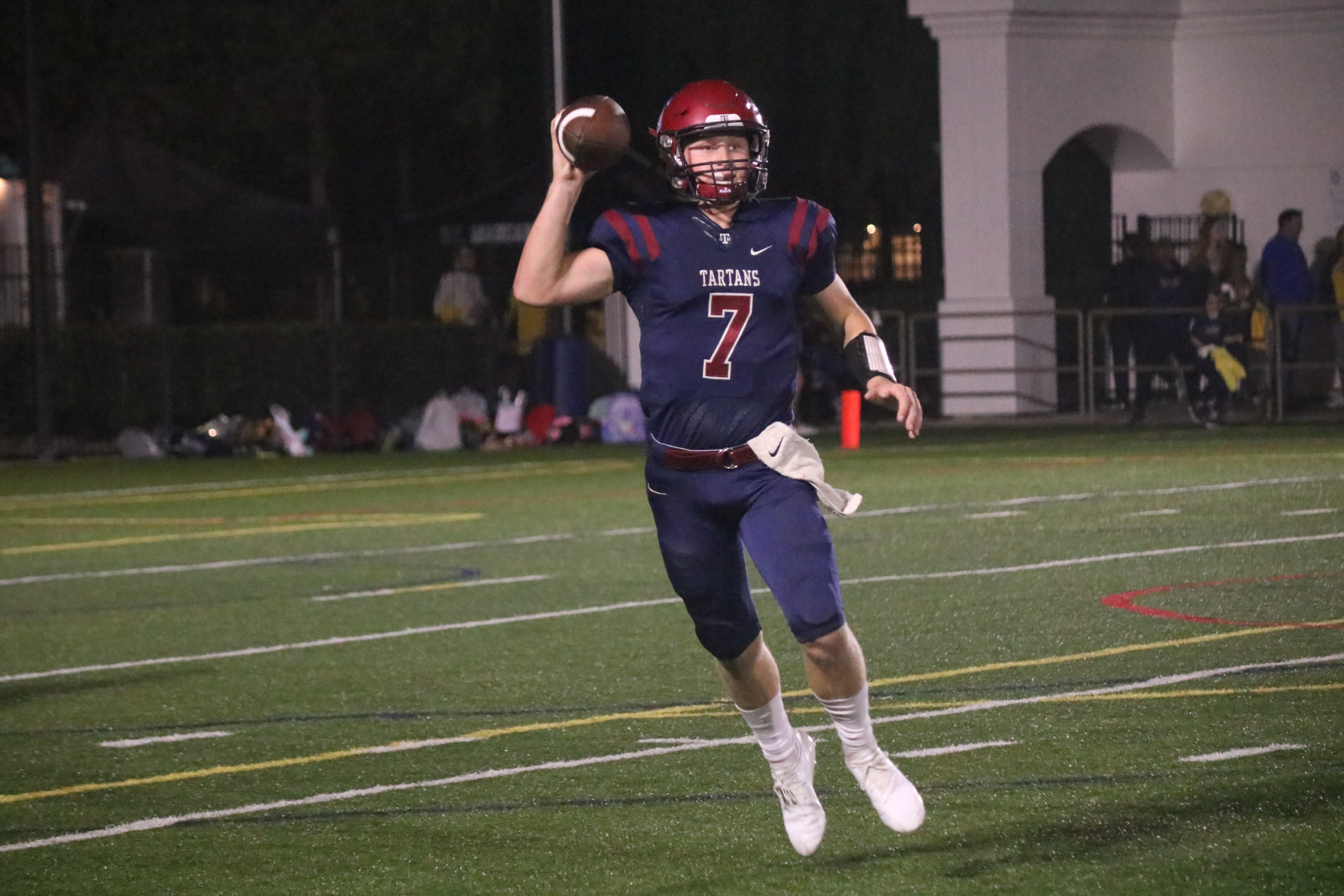 LAGUNA HILLS – It was by no means St. Margaret’s best game of the season, but the scoreline and the reward looked pretty good.

The Tartans held Saddleback Valley Christian to 87 yards of offense, and James Mott connected with Will Kenner on two touchdown passes to beat the Warriors, 31-0, and secure the San Joaquin League title in a crosstown San Juan Capistrano match-up at Laguna Hills High School on Thursday, Oct. 25.

“The last couple weeks our confidence took a little bit of a dip,” Mott said. “We felt like we weren’t playing to the level we know how to play to. So this win was a good win. It wasn’t perfect, there were mistakes. It was a good confidence booster.”

St. Margaret’s, who reached the semifinals in Division 7 last season, needed a strong effort heading into the playoffs where they will be looked at as one of the top teams to beat despite the smallest enrollment of the schools in Division 6.

“It jumps up real quick,” St. Margaret’s coach Kory Minor said. “The great thing about it is we have 13 seniors. Leadership is there, for sure. It’s really about execution. When we play at our top level, I feel like we  can’t be beat. It’s when we come down, penalties, missed assignments, missed tackles, wrong gaps, then we look average. We look subpar.”

Saddleback Valley Christian (3-6, 2-1) had won three in a row entering the game against St. Margaret’s to pull its season out of the fire. The Warriors finish as a playoff qualifier with a second-place standing in league. SVC coach Brendan Chambers expects the math in Division 12 to work out in the Warriors favor, but he said he’s holding his breath until the playoff brackets are released on Sunday, Oct. 28.

Thursday’s game opened with defensive prowess on both sides. Each team only completed one drive in the first quarter with SVC stopping St. Margaret’s on a fourth down and St. Margaret’s blocking a SVC field goal attempt.

“If we don’t start fast,” Minor said, “we take a series or so to see what they do. Once we get it, as you see, we get it. We’ve got to start faster, of course. That can’t happen in the first round, second round of the playoffs.”

The Tartans did get thing started early in the second quarter as Koa Todd took a pitch five yards for the score and the lead, 7-0.

Nick Ostlund came up with a sack on the next SVC series as the Warriors went three-and-out and backwards 17 yards. The ensuing punt was hit straight into the ground, and St. Margaret’s took over at the 11-yard line.

Mott hit Kenner on their first TD connection of five yards for the 14-point lead.

Luca Carson pulled in a sack for the Tartans on the next drive, and St. Margaret’s capitalized again on a four-play drive that ended on a 47-yard run by Matthew Stevenson. Stevenson found open space on the left side and could not be caught on the sprint.

St. Margaret’s led 21-0 at halftime. SVC only totaled 23 yards of offense at the break.

Chris Vartanian tacked on a 35-yard field goal late in the third quarter, and the Tartans defense continued its work.

Mott and Kenner hooked up for a 22-yard touchdown pass for the final tally, 31-0.