On Stage at The Coach House: Henry Kapono 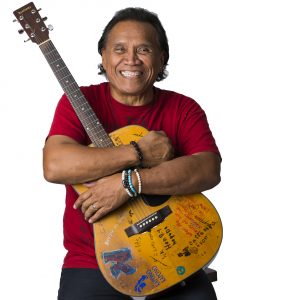 Known for his rock vibe that reflects sounds of his Hawaiian culture, Kapono is a Grammy-nominated musician who started out with his laid-back island rock band of Cecilio & Kapono in the 70s and 80s. Kapono launched his solo career soon after, producing 18 albums and producing fans worldwide to his Henry Kapono & Friends collaborations.

Kapono’s newest release, “Welcome 2 My Paradise!” celebrates the happiness of simplicity and beauty. Kapono will be performing many tunes from the new album at the July 27 performance.

“I wanted to keep it real simple, the theme of it is mainly an island boy going to America,” Kapono said. “It’s about my travels through different places in America, meeting people. It’s really about my life away from paradise, but I take paradise with me everywhere I go because it’s just who I am.”

Kapono has been traveling back-and-forth from Hawaii to tours mainly on the West Coast for some 40 years. His performances at The Coach House span back to Kapono’s days with Cecilio & Kapano as well.

“They just keep asking me to come back and I’m happy for that. It’s a great place, the owner is a really great guy and I just enjoy making music,” Kapono said. “I enjoy playing for people and making them happy.”

Kapono performs regularly in Hawaii, with a show on each island about once a month, doing conventions and private parties.

“My life has really been wonderful, I enjoy making music and playing music. This tour is called ‘Welcome 2 My Paradise!’ which is a new album I’m releasing, and most people have most of my albums already—so they’ve been asking for a new album—this tour is based around the new album. I’ll play a lot of the old classics, I can’t get away without doing those, but most of it is focused on the new songs.”

Kapono said a key element of the new album is that he didn’t want to add too many things to the sound, or overproduce the tunes.

“I wanted it to be simple and I wanted it to be fun, just something new,” he said. “There’s a song called ‘New York’ about stopping in New York at the airport for six hours and I just wrote a song. A lot of the songs are written in New York while waiting for my flights.”

Kapono said he’s happy with the way the album came out. He feels the catchy lyrics of his song will stick in people’s minds as they drive home from The Coach House.

“They will probably get a few songs stuck in their heads on their way home,” Kapono said. “I like to mix things up for everybody. I have fans that love to hear the same thing all of the time, but I have the new songs which is something I want to get to everybody.”

Many songs on the album revolve around walking the sandy beaches of Hawaii, reflecting on his childhood, surfing, and the lifestyle of “aloha.” Kapono said he thinks audiences of his show will leave feeling happy, light and smiling.

“I think we have a fun show, that’s mainly what it’s all about is having fun and being in a happy place and playing some great music,” Kapono said. “I love The Coach House, I love playing there, people are so nice and I’m really looking forward to it.”

“Welcome 2 My Paradise!” releases the same week as Kapono’s tour to The Coach House.