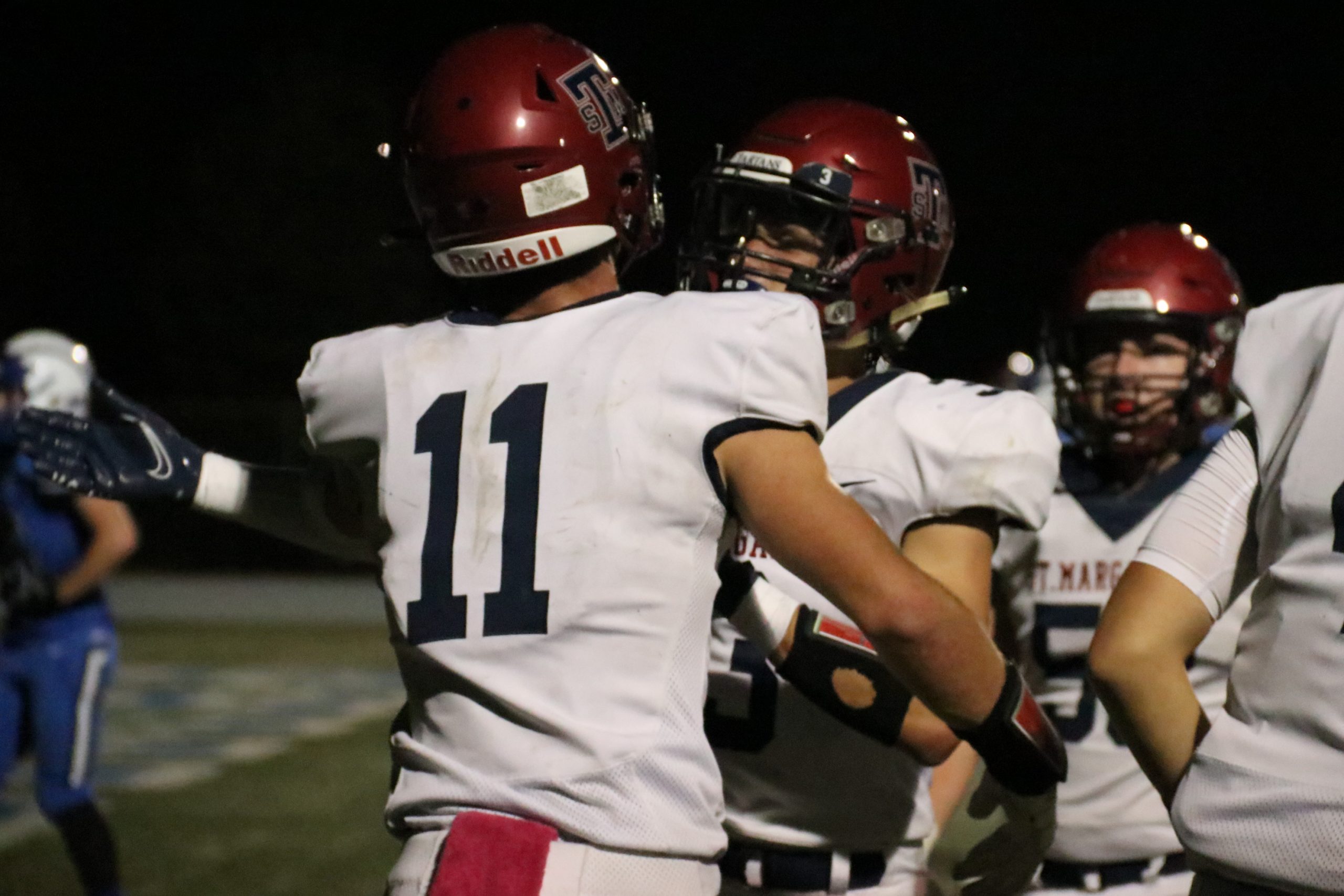 SAN JUAN CAPISTRANO – The St. Margaret’s football team was down.

The Tartans had grinded out a physical battle with Claremont as the CIF-SS Division 9 semifinal wound down late in the fourth quarter. Ball control with long, punishing drives had put Claremont ahead, and the Wolfpack intercepted the Tartans at the Claremont 6-yard line with five minutes left.

St. Margaret’s got the three-and-out it needed, and then, magic happened.

St. Margaret’s quarterback Jack Ruff connected with Stahl on three straight plays, including the go-ahead 14-yard touchdown pass, and Stahl jumped Claremont’s very next passing play for a 33-yard pick-six to ice the game for the Tartans, 23-13, and send St. Margaret’s to its first CIF-SS championship game since 2014.

“They responded,” an emotional Kory Minor, St. Margaret’s head coach, said. “At half time, I said they need to make individual plays, and they did that. No. 11 (Stahl), No. 4 (Ruff), that whole team, they did that. I’m so proud of these young men… I’m the happiest I can be right now because they fought through adversity, a damn good football team. I’m speechless.”

Ruff completed 20 of 30 passes for 201 yards, a touchdown and an interception. Stahl caught nine passes for 144 yards and a touchdown.

St. Margaret’s (9-4) will play on the road at Colony High School (7-6) in Ontario next weekend in the Division 9 title game. Colony beat Ventura, 28-0, in its semifinal. Game date and time for the championship will be announced by CIF-SS this weekend.

The Tartans have endured plenty over the last calendar year to get to this point.

As everyone experienced, the pandemic forced delays to St. Margaret’s 2020, and the Tartans would only manage a three-game season in the spring. Affected by injuries and players’ commitments to other sports, St. Margaret’s went 1-2, and in the offseason, the Tartans’ league was dissolved.

St. Margaret’s played a tough schedule as a freelance team in this fall 2021 season, but after a 2-4 start, the Tartans found their way to the CIF-SS playoffs and have won seven straight games to make the Division 9 final.

Minor could hardly contain himself in praising his group.

“Those men there. They believed. They bought in. They didn’t question it,” Minor said. “Every single day, they came to work. It wasn’t always the best work, but they found a way to get through it. They’re here because of that. I owe everything to this team, this community, this culture. This is special.”

Claremont (7-6) dictated the pace of this game from the opening drive, as the Wolfpack pounded out a 18-play, 10-minute drive that resulted in a touchdown and the lead, 7-0.

Claremont did not let St. Margaret’s beat them deep, and, for the most part, controlled the line of scrimmage to force the Tartans to earn every yard on the field.

Last week, St. Margaret’s led 35-7 at San Dimas at halftime, and the Tartans had to hold on for a 38-28 win. San Dimas’ comeback started with an onside kick to open the second half. San Dimas ground out the game on the ground.

With Claremont leading 7-6 at halftime, St. Margaret’s got hit with déjà vu, as the Wolfpack recovered an onside kick to start the second half, but the Tartans defense made its first of many big second-half stops.

Late in the third quarter, Olvera Harle struck again from even longer with a 49-yard field goal to finally put St. Margaret’s ahead, 9-7.

Claremont responded in turn and retook the lead with a 14-play drive and a muscled-in 17-yard touchdown run with just over eight minutes remaining for a 13-9 lead.

Stahl and Ruff finally ignited with a 12-yard pass, 14-yard pass and 14-yard touchdown pass for a 16-13 lead with just over two minutes remaining.

Just 17 seconds later, on Claremont’s first offensive play of the drive, Stahl jumped on a Claremont pass out to the left and navigated the Claremont sideline for the 33-yard return and a 10-point lead, 23-13.

Claremont got the ball one more time, but with a sack by Battle Gideons and a game-ending interception by Tyler Matthews, the Tartans shut down the Wolfpack to advance.

In the final, St. Margaret’s will meet up with an athletic Colony team that possess a strong defensive line.

Colony was 4-6 in the regular season and finished second in the Citrus 4 league. Colony actually lost to Claremont, 13-6, on Sept. 10. In the playoffs, Colony won on the road in Orange County at Portola, 42-21, and Western of Anaheim, 52-27. Colony won at home against Ventura in the semifinals, 28-0.

St. Margaret’s last trip to the CIF-SS Final was successful with a 2014 East Valley Division championship over Grace Brethren. Colony’s last CIF-SS Final was also in 2014 when the Titans beat Los Altos for the Central Division title.