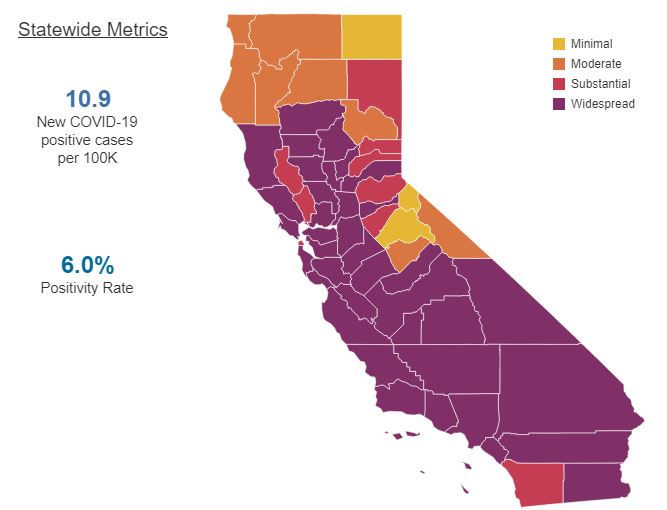 Less than a week after coming off California’s watch list for coronavirus hot spots, Gov. Gavin Newsom on Friday, Aug. 28, rolled out the state’s color-coded and tiered system to track coronavirus cases that now puts the county at the highest risk level.

The new monitoring system, which places counties in one of four color-coded categories—widespread (the highest risk level), substantial, moderate and minimal—replaces the state’s watch list that identified counties experiencing rises in cases and hospitalizations.

Under the tiered system, which Newsom described as “simpler,” yet more “stringent” and “steady,” a county’s rate on new cases and positive tests will determine the risk level in which they belong—just two statistical categories compared to the five measured for the watch list system.

Counties that have more than seven new COVID-19 cases per 100,000 and a test positivity rate of more than 8% would be placed within the widespread category that’s colored purple, meaning “many non-essential indoor business operations are closed.”

As of Friday, the tiered system had Orange County falling in the widespread category, despite reportedly having 5.6 new cases per 100,000 and a 5% test positivity rate. Newsom, however, indicated that Orange County could be moved down a tier in the coming days.

“With the new criteria, we captured a couple (of counties) that were just coming off that (watch list). They’re likely to come out very, very shortly,” Newsom explained during his daily news conference.

Effective Aug. 31, some business sectors within counties under the widespread tier will be allowed to reopen with modifications, according to the state. Those sectors include all retail, shopping centers—at 25% maximum capacity—and hair salons and barbershops for indoor operations.

Orange County Health Officer Dr. Clayton Chau confirmed with the state that as long as the county remains on its positive trend, county schools would be allowed to open in-person as of Sept. 8.

Currently, 37 other counties join Orange County in the purple tier, representing 87% of the state’s population. The next tier—substantial—which is colored red, represents 12% of the population with nine counties included in that risk level.

(Interactive chart below. Scroll to see all counties, and select a county for more information.)

The governor said that the intent of the new system is to be stricter compared to the watch list when it comes to loosening restrictions and transitioning counties to lower risk levels.

According to the state, there will be a 21-day mandatory wait time before a county can be transitioned into a lower tier. Counties must also meet the state’s metrics for the next tier for two weeks straight.

“We’re going to be more stubborn this time and have a mandatory wait time between moves,” Newsom said. “We didn’t do that last time and that is a significant distinction between what we have learned from the past and what we now are advancing in this more stringent, but we believe, more steady approach to moving counties within tiers and modifying the activities within those respective counties.”

Counties will only be allowed to move one tier at a time and the metrics will be assessed weekly, every Tuesday.

Newsom also warned the system allows the state to toggle counties back and forth between the tiers based on whether they meet the criteria for two consecutive weeks.

“We also have criteria that not only toggles forward but also toggles back—moving back if you fail to meet the criteria for at least two straight weeks, you’ll have to move back into the old tier,” Newsom said.

Shawn Raymundo Shawn Raymundo is the city editor for the San Clemente Times. He graduated from Arizona State University with a bachelor’s degree in Global Studies. Before joining Picket Fence Media, he worked as the government accountability reporter for the Pacific Daily News in the U.S. territory of Guam. Follow him on Twitter @ShawnzyTsunami and follow San Clemente Times @SCTimesNews.