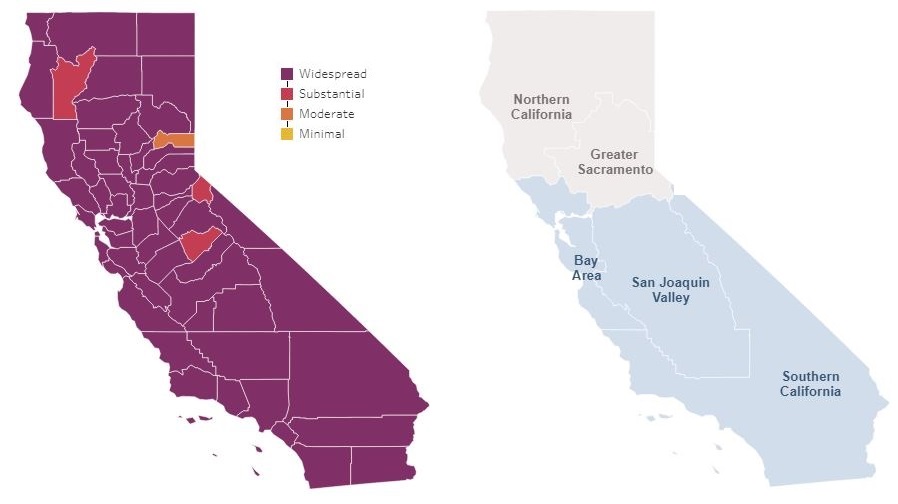 For the first time since October, California’s coronavirus metrics for transmission and the numbers for hospitalizations showed major decreases in statistics reported in the state’s weekly update on Tuesday, Jan. 19.

Health and Human Services Secretary Dr. Mark Ghaly reported a 11.6% 14-day testing positivity rate in California with a 9.9% seven-day rate, indicating that case numbers and transmission rates are finally on the way back down after explosive November and December rates. The 14-day rate was 12.7% 14 days ago.

While these decreases in metrics are reason for optimism, they contrast the rising death rate that has made January the deadliest month of the pandemic so far in Orange County.

There have been 602 coronavirus-related deaths reported in Orange County in January. There were 1,875 deaths in the county over the previous 10 months, with August marking the previous one-month high reported at 376.

To combat this spike in deaths, the state had been ramping up its vaccine distribution with a goal of 1 million more vaccines in the 10 days leading up to last weekend.

The state hit its goal with Dr. Ghaly reporting over 1.5 million vaccines administered by Tuesday, with Friday marking the most doses administered in a single day at 110,505. Over 3.2 million doses have been shipped throughout the state.

The state also is pausing the use of one lot of the vaccine after a handful of allergic reactions were recorded. Dr. Ghaly reported that “fewer than 10” individuals required medical attention after receiving lot 41L20A of the Moderna vaccine, and out of an abundance of caution, the state is recommending providers pause the use of this single lot of the vaccine.

Orange County is in Phase 1A of vaccination distribution with health care workers and long-term care residents, as well as individuals age 65 and over and emergency service workers eligible for the vaccine. For more information on getting the vaccine in Orange County or to schedule an appointment at the Disneyland Super POD, go to othena.com.

After the initial three-week period of the stay-at-home orders passed on Dec. 27, the state will now make a daily review of each region’s projected four-week available ICU capacity, and if that projection remains under 15%, the order shall remain in place. Once the region’s four-week projection shows 15% availability or greater, the region will be released from the order.

The projections are based on the region’s current ICU capacity, seven-day average case rate per 100,000 residents, transmission rate and rate of ICU admission.

The Southern California region and Orange County were again both listed at 0.0% adjusted ICU availability on Tuesday, Jan. 12.

According to the county, the adjusted ICU availability is being used “to preserve the capacity of the ICU to also treat non-COVID-19 conditions. … If a disproportionate number of ICU beds are being utilized to treat COVID-19 patients, then patients with non-COVID medical issues may not be receiving or be able to receive the level of care they need.”

If a region is using more than 30% of its ICU beds for COVID-19 patients, an extra 0.5% is removed in the adjusted capacity for every 1% over that 30% threshold to preserve those necessary resources and beds.

The San Joaquin Valley (0.0%) and the Bay Area (7.4 %) regions are the other two of the state’s five regions under the stay-at-home order. Each has gone through its initial three weeks and will also receive the daily four-week projections. Greater Sacramento (8.9%) came out of the order on Jan. 13, as its four-week projections allowed. Northern California (30.5%) has never been under a regional stay-at-home order.

Nationally, the United States now tops 24 million coronavirus cases. There have been 399,003 deaths in the United States, and the national seven-day average testing positivity is at 10.42%.

The four-tiered system is the main component of the state’s Blueprint for a Safer Economy for determining in what capacity different sectors, businesses and activities can reopen safely as the COVID-19 pandemic continues.

The state reports an adjusted case rate, which is adjusted for the volume of testing. The unadjusted rate is 99.7 daily new cases per 100,000, up from 91.3 last week and down from 74.8 two weeks ago.

The county also saw a drop in its testing positivity, as the countywide number dipped to 16.7% from last week’s 19.5%. The metric was at 17.1% two weeks ago. The threshold for the purple tier is 8%.

The county’s health equity positivity rate was reported at 21.2%, down from last week’s 24.2% and the 23.4% of two weeks ago. The threshold for the purple tier is 8%. The health equity rate measures the testing positivity in a county’s low-income and more racially diverse neighborhoods.

To move back down to the red tier, Orange County would need to have its metrics at red levels for two consecutive weeks. If the county’s daily case rate is stable or declining but not at the next level, there would be the possibility of moving down if the testing positivity and health equity metrics meet the level for two tiers lower—that is, orange tier levels while in the purple tier.