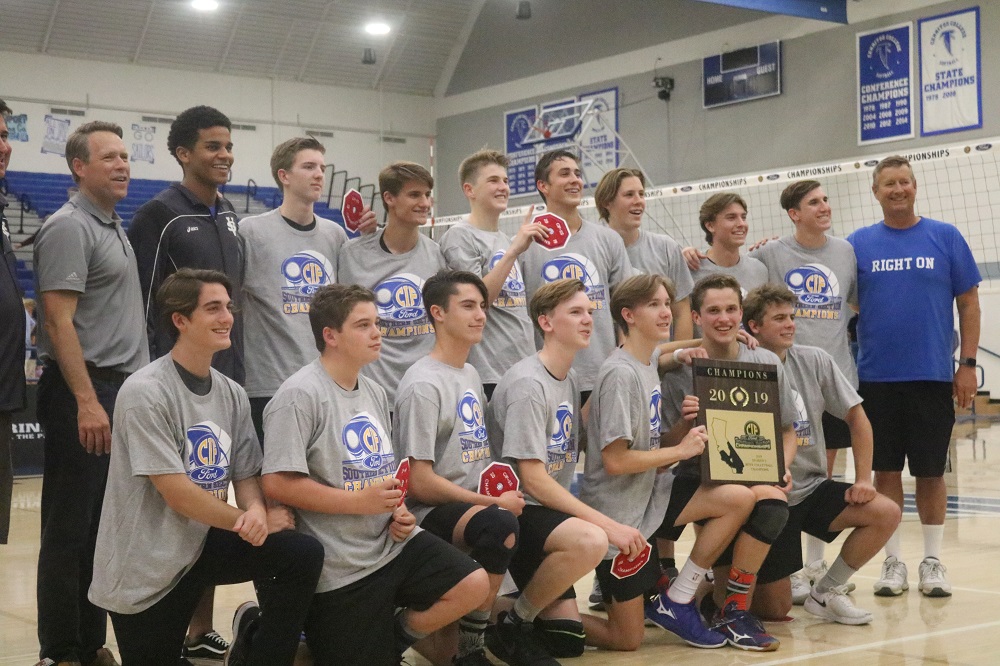 NORWALK – Saddleback Valley Christian boys volleyball is back in form, not that they ever truly lost it.

In their second straight CIF-SS Final and sixth in seven seasons, the Warriors clinched their fifth CIF-SS championship in a four-set win over Oak Park, 25-19, 25-22, 13-25, 25-14, in the Division 2 title game at Cerritos College.

“This year was all about being selfless and playing for a purpose beyond yourself and your own glory,” SVC coach Ryan Van Rensselaer said. “That was the secret sauce. They were constantly trying to lift up the guy around them. That’s why they gelled.”

SVC won four straight titles with two in Division 5 and two in Division 4 from 2013-2016. With the advent of the competitive equity playoff system, the Warriors vaulted to Division 1 and fell in the first round in 2017. Now in Division 2, SVC proved with a title game appearance last season (a sweep loss to Orange Lutheran) and this season’s title that the little guy is exactly where he should be.

“It’s absolutely huge,” Van Rensselaer said of the Division 2 title. “This little school of 200, we’re always outmanned. Now they know they belong, that they can compete. If we really unify and play for that greater purpose, we can play with anybody.”

One of the connecting seniors to that title run and a standout for the Warriors is George Dyer. The USC-bound Dyer, with volleyball running throughout the family blood, nailed 12 kills and pulled out a team-high 12 digs.

“We really went after it this season,” Dyer said. “We put our heads to the grindstone. We finally overcame that mountain.”

SVC also showed that it plans on keeping up this winning tradition. While Dyer is a key player leaving for the Warriors, SVC was also powered by its youth.

Van Rensselaer said winning doesn’t get old, but this much success does present one challenge.

“They’ve been here constantly, over and over and over again,” Van Rensselaer said. “You have to constantly reset and say, why am I doing this? What’s the purpose here? Great, you’ve won a CIF championship, but if I can really build my life upon the things I’m learning here and really do it for God, do it for Jesus Christ then that’s meaning.”