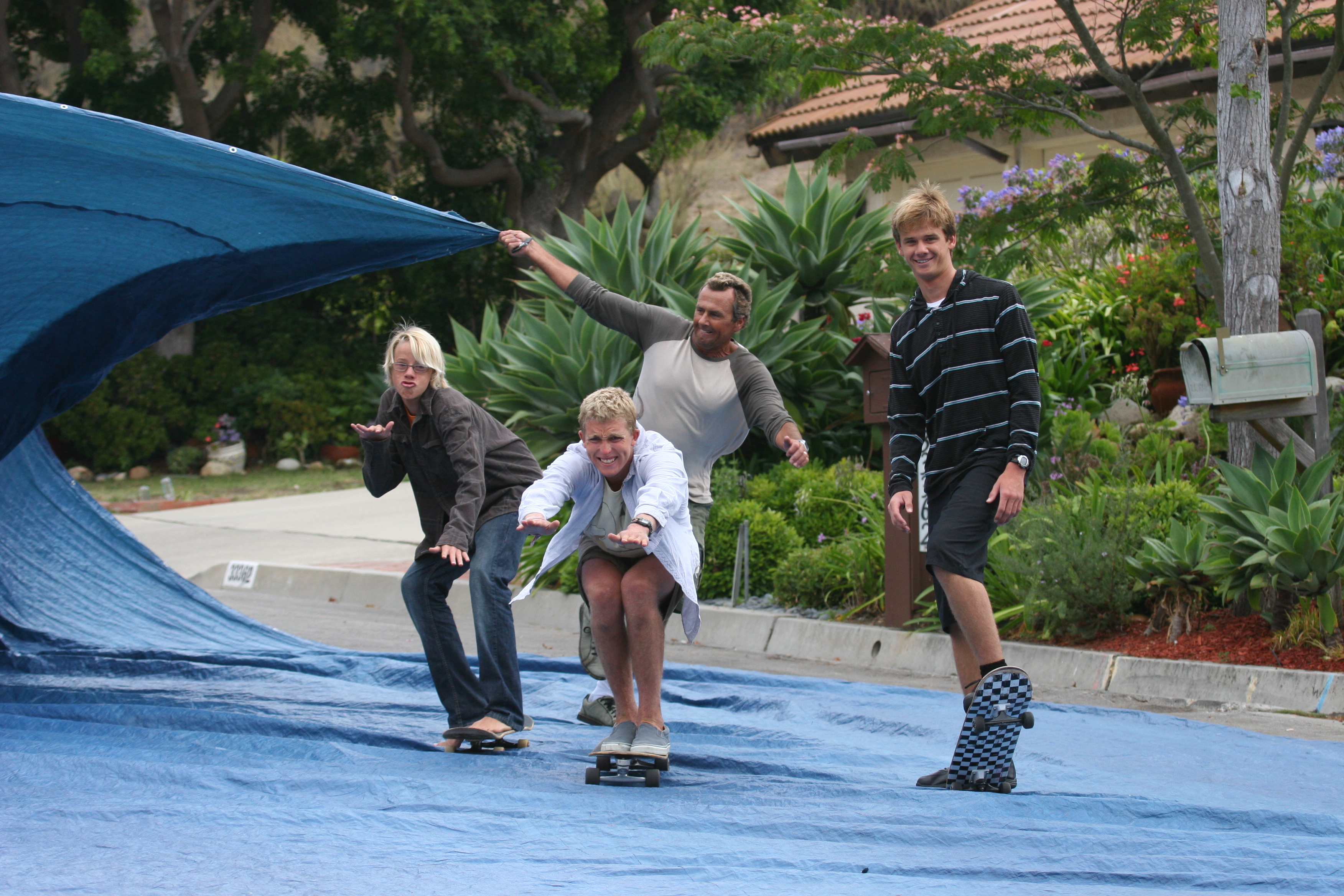 The originators of blue tarp surfing—Cody Brady, Wyatt Brady, their dad Robert Brady and Dodge Weirath—have set off a wave of YouTube videos with the posting of their original video Blue Tarp Surfing on December 26, 2009. The boys used their Christmas money—upwards of $100—to purchase a big blue tarp to make virtual barrels to “surf” through on skateboards in the street in front of their Merideth Canyon home—where the boundaries of San Juan Capistrano, Capo Beach, Dana Point and San Clemente converge.

The idea was first hatched in the mind of Cody and Wyatt Brady’s dad Robert when he saw the blue tarp covering his boat—in the dry storage area of the Embarcadero Marina at the Dana Point Harbor—blowing in the wind. Robert stood watching as the billowing tarp formed what looked just like a barreling ocean wave. He told the boys about what he had seen and they took it from there. After many experiments with tarps of various shapes and sizes they hit upon the perfect combination of material and technique and blue tarp surfing was born. A skateboarder rides—on tarp covered pavement—through a “barrel” created as wind fills the tarp being pulled at the corner by another, to form a likeness of a barreling ocean wave. Huh? I know…you have to see it to believe it.

The boys made a homemade video of themselves and their friends “surfing.” After the video was uploaded to the internet it quickly attracted 30,000 or so hits within the first few weeks and caught the attention of Surfline. It has since topped a half-a-million views. The video made its debut on Surfline.com and held a spot in their top viewed videos for quite awhile in early 2010. Cyrus Sutton, creator of Korduroy.tv—a website he calls “a new platform for independent surf culture created with the purpose of spreading digital aloha through video how-tos, short films, rants and interviews, where ideas can be shared that respect self-sufficiency, craftsmanship and a surfing experience of our own design”—spotted it on Surfline and convinced the boys to let him shoot a new version of the film. Sutton’s film was given the name Tarp Pits and has also been generating buzz on YouTube. Since then, blue tarp surfing has become a bonafide fad among surfers of all ages—the thing to do when the waves are not firing. The number of blue tarp surfing videos by others getting posted to YouTube keeps growing as people discover this “just for fun” tube ride spoof.

The guys from RuseEntertainment.com in Santa Cruz spotted the boys’ video on YouTube and made their own video contribution to the craze. Their video, posted a couple of weeks ago, has injected new life into the frivolous fun of simulating the crown jewel of surfing maneuvers. Their video has been viewed more than a million-and-a-half times, since its debut and sparked a new influx of homemade YouTube video postings.

Just as always follows behind the invention of all the very coolest stuff of life, there will be those who come out of the woodwork to claim that they invented it “years ago.” But Cody, Wyatt and Dodge’s video is, according to the YouTube time stamps that mark the upload of videos to the website, the first of its kind—on the internet, at least—a fact that really doesn’t matter that much to the boys. “We want everyone to try it,” said Cody. “It’s such a fun thing to do and we posted our video with the purpose of sharing it with the world.”

“It’s just a toy,” said Dodge, “A toy just like surfing. It belongs to everyone.”

Robert echoed that sentiment by adding, “It’s strictly for the purpose of having fun but it is pretty exciting how it has turned into a lot more than we expected—the way it’s taken off on the internet and all over the world. It’s all about being a kid or being a kid at heart.”

Robert, knowing the idea “was really something” but not exactly sure what, has applied for a provisional patent and will apply for a utility patent within a year, as is required by the United States Patent and Trademark Office.

To find out more, visit Blue Tarp Surfing and see Tarp Pits at www.bluetarpsurfing.com or watch the video below: