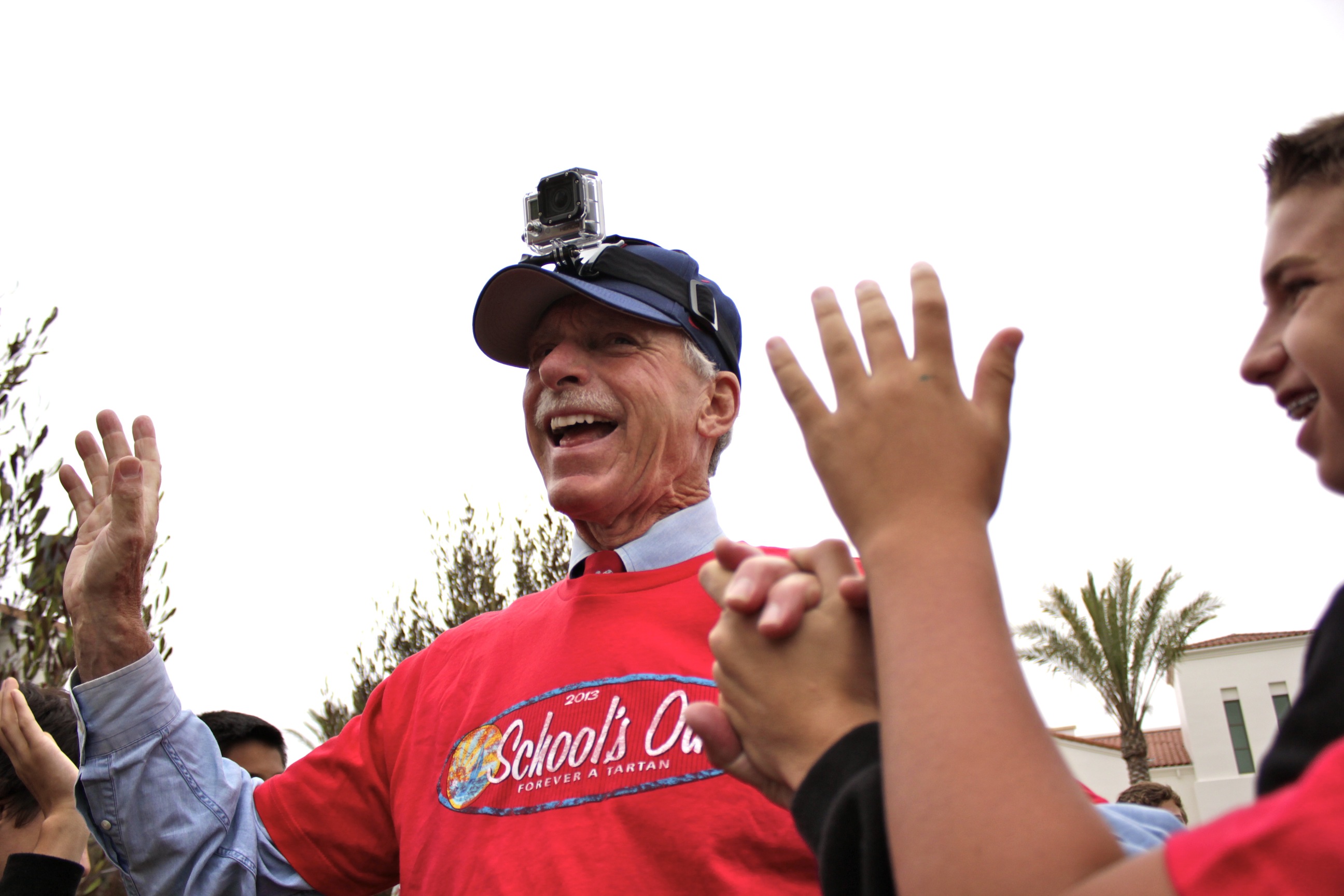 On what was the final day of instruction at St. Margaret’s Episcopal School, the entire Tartan student body, teachers, faculty and parents paid tribute to Marcus Hurlbut, who is retiring after 10 years as headmaster at the school.

Shortly after the remaining upper school students finished their final exams, they joined their classmates from lower and middle schools to form a human tunnel that travelled from Hurlbut’s office, around an athletic field and into Pasternack Field House for an all-school assembly.

Students, teachers and faculty were all dressed in red shirts that read, “School’s Out, Forever a Tartan”—a nod to the name of Hurlbut’s boat, according to Lora Allison, the school’s director of community life. As Hurlbut made his way through the tunnel, students greeted him with cheers, high-fives and hugs.

Hurlbut was first surprised in his office by a smaller group of upper school students, who were part of a trip in January to New York and New Jersey to provide on-the-ground support for Hurricane Sandy victims. Hurlbut, who is originally from the Northeast and is set to retire there, was part of that group of 11 students and five adult chaperones. The students presented Hurlbut with a framed copy of a Dispatch story about the trip.

Inside the gym, nearly 1,500 people gathered to give Hurlbut a final send-off.

“The face of our school would be so incredibly different if this mustached-man did not step on our campus 10 years ago,” senior Matt Messina said.

“I have been able to grow alongside Mr. Hurlbut during my time in high school, and I have been affected in so many ways by the time, talents and the love of this man,” Messina said. “As I leave, I am proud to call him an instructor, a mentor and a close personal friend for whom I deeply care about.”

Hurlbut was presented with gifts from lower, middle and upper school classes. The entire auditorium also rose to their feet to give Hurlbut a standing ovation.

“From the first day I stepped foot on the St. Margaret’s campus, I knew this place was special. I knew it was special primarily because the students of St. Margaret’s were truly unique,” Hurlbut said. “You are special. You welcomed me. You made me a part of this school in a way that I will forever cherish.”

Lower school students also recognized Hurlbut’s wife, Pat Hurlbut, by making a $125 donation in her name to The Ark of San Juan’s animal rescue efforts. A GoPro camera was strapped to Hurlbut’s head to document the celebration.

In October, St. Margaret’s hired William Moseley to take over as headmaster. Moseley currently serves as interim headmaster at St. Andrew’s School in Boca Raton, Fla. He begins his new position on July 1.

There is still one last duty for Hurlbut as headmaster. On Saturday, he will say goodbye to the Class of 2013 during their commencement ceremony at Chalmers Field.