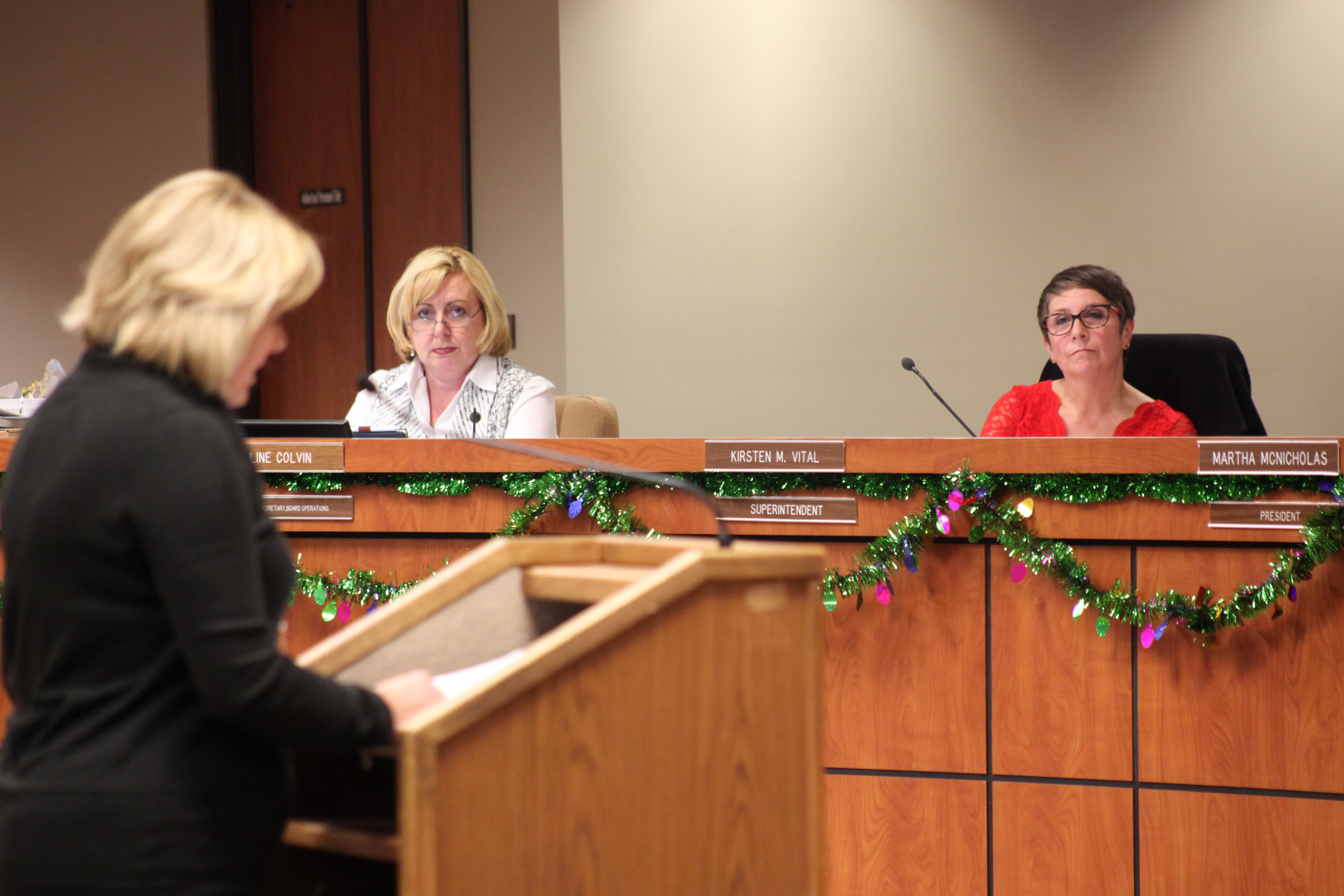 Negotiations between CUSD and CUEA have been taking place in closed session for over a year, and officially stalled back in June. In October, it was announced that mediation had failed.

The Board of Trustees meeting was at capacity on Dec. 6, and rather than let teachers line the walls like the board did on Nov. 8, the district’s security guards refused to let anyone in who didn’t have a seat. This resulted in dozens of teachers left in the hallway chanting, “Let us in!” about an hour into the meeting. Others stood in the dark holding signs that could be seen through the windows of the district building.

The board received a budget update from Deputy Superintendent Clark Hampton prior to hearing public comment, which largely focused on explaining why CUSD cannot grant the pay raise teachers are asking for. Hampton told the board that compared to other school districts in Orange County, CUSD receives less in funding from the state per student due to the implementation of the Local Control Funding Formula (LCFF), which was enacted by the state in 2013-2014. Hampton said that compared to districts in Laguna Beach and Newport Beach, CUSD spends a higher percentage of funds on teachers’ salaries.

During public comment, CUEA President Sally White told the board that she’s “heartbroken” by the “low morale and broken trust” between teachers and district leaders.

White shared a list of grievances, including accusations that Superintendent Kirsten Vital has shifted funds and priorities away from the classroom by allocating money to private consultants and buying new equipment, furniture and cars; and “creating additional district-level management positions exceeding the pre-recession level of management” despite a decline in student population.

“Superintendent Vital, who earns one of the highest salaries among OC superintendents, has failed to negotiate a fair and equitable settlement, and is holding educators’ salary near the bottom in Orange County, crippling the future ability of the district to recruit and retain an excellent teaching force,” White said.

“(The) superintendent must refocus CUSD’s budget priorities back to the classroom and offer fair, competitive compensation to the educators of CUSD in order to recruit and retain the best educators,” White concluded. “Whatever the outcome of fact finding, we will somehow have to come together, restore broken trust and do the business of this district, which is the education of our students. It’s why we became educators. It’s why we show up daily to do our best, even when morale is at rock bottom.”

The first fact-finding session for CUSD and CUEA took place on Dec. 12, and both parties agreed to participate in a second session slated for Thursday, Jan. 11.

“In order to respect the process, the neutral fact finder has directed the parties to keep the details of the fact-finding confidential,” CUSD officials said in a press release. “Information will be released as soon as it becomes available following the next fact-finding meeting.”

During these sessions, a three-person panel reviews the arguments and proposals of each side and ultimately issues non-binding recommendations. If the fact-finding process does not result in an agreement, CUSD would then be able to impose its last, best and final offer. If the teachers’ union is not satisfied with that offer, district teachers would maintain the right to strike.

For more information on the negotiations, visit www.capousd-ca.schoolloop.com/cuea and www.cuea.org.