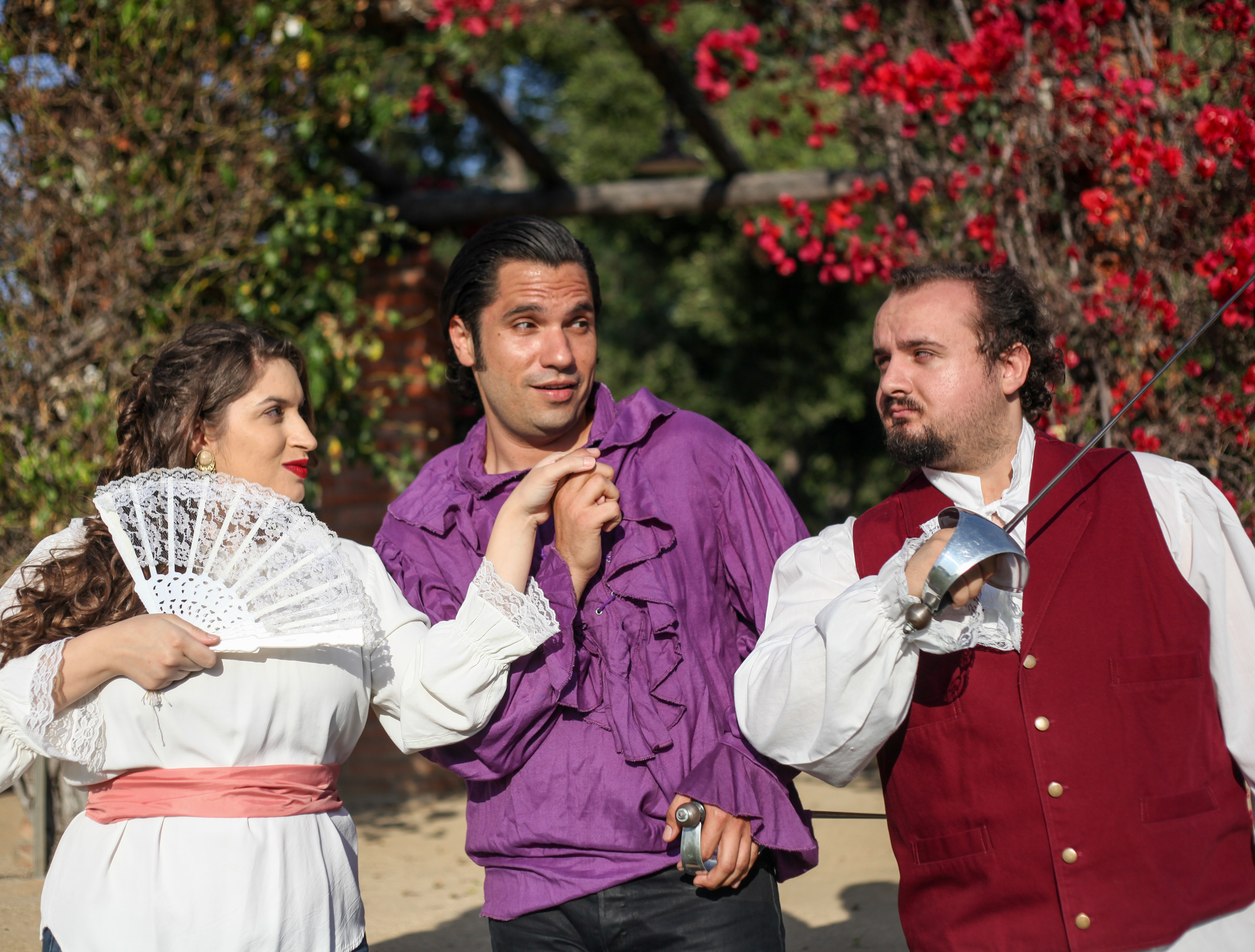 ‘The Curse of Capistrano’ Coming to San Juan

“Come back to a time in history where men were as fast as their swords. These dashing caballeros created a new country—Alta California. The King of Spain had granted large areas of land called haciendas to those he felt were worthy. These men were called Dons and ruled these haciendas and all who worked the land. Above all of the Dons was the Governor, a ruthless and cruel man. The missions were sprouting up along the El Camino Real. Some Dons were corrupt and the few honest men could not speak out for fear of retaliation. There was no one to turn to until one man stood up for what was right…”
— Camino Real Playhouse

Community members and patrons of the local Camino Real Playhouse are in luck if they’re in the mood for sword fights, flamenco, fiestas, political intrigue and romance this summer. The Playhouse is presenting nine performances spanning three weekends next month of “The Curse of Capistrano” at the Historic Town Center Park. Each year the playhouse’s summer production is an anticipated community event—a tradition that draws families and friends together to share a picnic and enjoy the natural beauty downtown San Juan has to offer.

The Curse of Capistrano, written by Johnston McCulley and originally published in 1919, was the first literary work to feature the fictional character of Zorro, and what some may not know is that San Juan Capistrano plays a large part in setting the scene in the novel. In fact, not too far into chapter one, you’ll find references to El Camino Real, the missions, and, of course, San Juan Capistrano.

“Zorro really wasn’t an historical character, but he’s very much a part of San Juan Capistrano because the book was written here,” said Tom Scott, president of the Playhouse. “And we’re bringing that to life.”

The book was adapted for the playhouse by the show’s director, Dan Blackley, and co-writer Kyle Seitz, a former student of Blackley’s. The duo began writing the play after Blackley was inspired to pursue the project last year during his time directing “A Midsummer Night’s Dream.”

“I was looking at the (Historic Town Center Park) stage, and the Mission bells chimed,” Blackley recalled. “I grew up with the Mission and the swallows, and every time I saw it as a kid, I also thought of Zorro, because the mission bell would ring and that was the cue for Zorro to go off and fight injustice. So I turned and looked back at the stage with the bougainvillea and with the way it sort of looks like a mission, I thought, this is the show we need to do in this city.”

Luckily, Scott and Playhouse Vice President Beverly Blake agreed, and so began the makings of a new twist on the summer tradition.

“I felt like it would draw the community together,” Blake said. “This is the best community I’ve ever lived in, and I just thought this would be really special for it. The enthusiasm has been overwhelming.”

In addition to what Scott describes as a fast-paced play—revitalized skillfully, he added, from not-so-thrilling 1800s language—the show is filled with drama and attention to details that remain true to the story, from the 1880 period costumes and furniture to professionally choreographed sword fights. Blackley said he also focused on keeping things light and comic throughout the play, drawing inspiration from old Errol Flynn films like The Adventures of Robin Hood, The Sea Hawk and the 1940s version of The Mark of Zorro.

Blackley said he enjoyed sprinkling humor throughout the script, and is also looking forward to the incorporation of flamenco guitarists and dancers.

“We have lots of fun elements throughout the show on top of the fact that it’s outside in this beautiful historic park—with picnics,” Blackley said. “It’s a perfect summer show.”

Attendees are invited to come early to the 7:30 p.m. performance. Scott said it’s common for people to arrive around 6 p.m. or so to enjoy their picnics and watch the set take shape—he often sees residents making new friends, swapping dishes and sharing conversation.

“By the time the show starts, everyone is kind of family,” he said.

Scott and Blake hope to draw lots of San Juan families to the show this year with a special family discount of $40 for families of up to five. Regular tickets are $15 each.

“It’s such a part of all of our histories. We wanted to do this so that the younger generation would learn about someone they perceive as this, sort of mythical superhero,” Blake said. “The legend started right here in San Juan Capistrano.”

Where: Performed on the stage in the Historic Town Center Park, located at 31852 El Camino Real, San Juan Capistrano

Pre-show: An interactive demonstration for children starts at 7 p.m. Kids will learn how to sword fight using soft foam swords. Free Zorro masks will also be given out to children.

Tickets: $15 per person online or on-site. Discounted tickets for families of up to five are $40 on-site only. For more information or to purchase tickets, visit www.caminorealplayhouse.org.

Pro Tip: Picnicking starts around 6 p.m., and each night a Prettiest Picnic Contest is held. Judging is over by about 7 p.m. Winners will receive gift certificates to the theater for the coming season.

In addition to allowing picnics, concessions will be available at the park. Blankets can be place toward the front of the park, followed by low-back chairs and higher-backed chairs in the back.