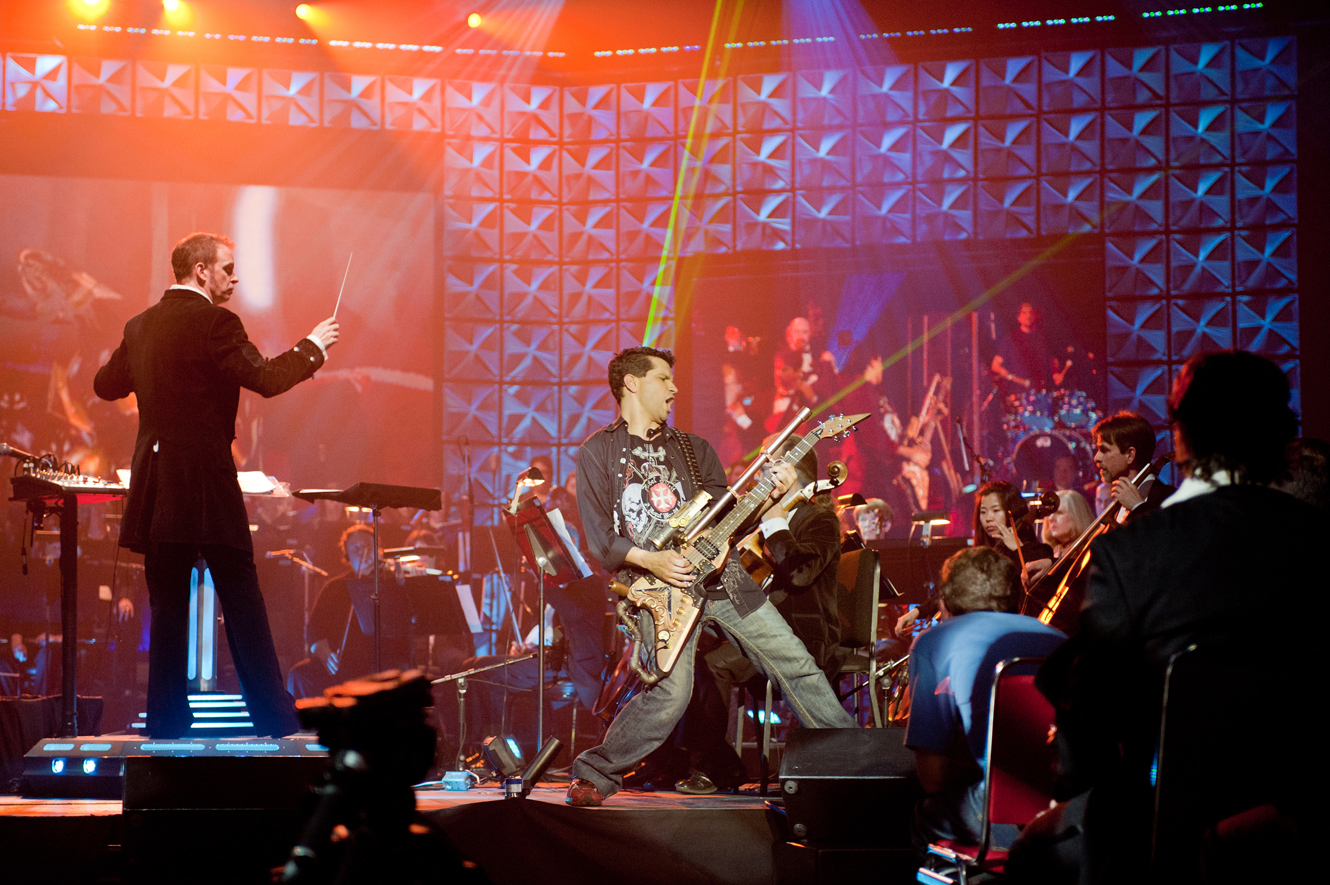 The Maestro of Video Games

For those who have ever skateboarded their way through a foundry in Tony Hawk’s Pro Skater or raced through the streets of Agrabah in Disney’s Aladdin, it was Tallarico who orchestrated the experience.

Tallarico is one of the best known and critically-acclaimed video game music composers. Over the course of his career, spanning more than two decades, the 46-year-old Massachusetts native has helped usher in a change, from what he calls “bleeps and bloops” to sweeping orchestral pieces and anthemic rock ‘n’ roll—the new backdrop to which gamers are attaining high scores and reaching next levels.

“When you watch a movie, you’re watching somebody else’s story,” Tallarico said. “When you play a video game, you become that character. The music becomes the soundtrack of your life.”

More Than a Few Tokens

Since breaking into the industry in 1991, Tallarico has composed music for more than 300 console and computer games. He’s held three Guinness World Records, including one for the person who’s worked on the most commercially released video games.

For the past 12 years, Tallarico has also taken to the road, performing alongside other musicians and full orchestras in his Video Game Live concert series. VGL has released three albums, all of which debuted in the Billboard Top 10 classical crossover category, and Tallarico has put out six albums himself.

There’s a market for video game music because the video game industry itself is booming. Tallarico said the combined sales for video games he’s worked on exceed $4 billion.

In 2013, video game sales, including hardware and software, grossed over $6 billion, according to a Feb. 2014 market report by the NPD Group, which tracks domestic sales. When combined with sales for used and rental and digital formats—the highest grossing category, which includes downloadable content, subscriptions and mobile games—that figure is over $15 billion.

“When people ask me sometimes if video games will ever be legitimate, I’d say, ‘Yeah, about 10 years ago. You just don’t know it yet,” Tallarico said.

Leveling Up the Quality

Many of the latest games also feature complex storylines—it’s no longer just about saving the princess or a player shooting their way through swarms of alien spaceships. Video games have evolved to a point where critics scrutinize narratives as much as graphics and playability.

Games now resemble blockbuster Hollywood movies with actors and screenwriters crossing over for projects. Willem Dafoe and Ellen Page lent their likenesses and voices to the 2013 interactive drama and adventure game Beyond: Two Souls. David Goyer, the screenwriter who helped pen director Christopher Nolan’s Batman trilogy and the 2013 Superman movie, Man of Steel, co-wrote the stories for two games in the Call of Duty series.

But unlike movies, video games are inherently interactive.

“When John Williams goes and sits down to write the music, he writes for that linear media. He has to follow that path that has already been pre-written,” Tallarico said. “With video games, it’s almost like the player becomes the conductor.”

Better technology has allowed video game music composers to move beyond those bleeps and bloops. Early video game technology limited music to short, 45- to 60-second melodies, looped continuously. While some have stood the test of time, like the themes for Super Mario Bros. and Tetris, many were created as an afterthought.

“The main focus of writing video game music back then was it had to be simple and have a great melody,” Tallarico said. “There was no technology to make music on. You pretty much had to be a computer programmer.”

When he was 10, he’d take his father’s cassette recorder to the local arcade and record all his favorite music. He’d come home and charge his neighborhood friends a nickel to watch him perform guitar, backed by video game music. “Back then, it was magic,” Tallarico said.

In high school, Tallarico and his friends would try to “crack” video game codes. By forcing an error in the game, he and his friends could access the programming and copy the codes onto disks.

Music, though, was Tallarico’s primary calling. It also runs in his family. His cousin is Aerosmith lead singer Steven Tyler (nee Tallarico).

“He’s 20 years older than me, so I never knew him when he wasn’t famous,” Tallarico said. “Whenever (Aerosmith) would come to the area, we got to go the shows. Watching him perform for 20,000 people, as a young child, I never thought it was a job that would be impossible or something that was out of reach.”

After high school, Tallarico spent one year at Western New England University before deciding to pack his bags and head to California to start a music career.

“When I turned 21, I literally left my parents crying on the doorstep,” Tallarico said. “I wanted to make it as a professional musician, and I wanted to get paid to write music. I had no plan whatsoever, except that California was the place to do it. It was where dreams were made.”

Tallarico spent two weeks on the road, in his Pontiac Fiero, with only a pair of jeans, three T-shirts, a teddy bear he received the day he was born, a keyboard and $500 to his name.

He knew little about Southern California, except Los Angeles and Hollywood. While driving out of Las Vegas, Tallarico said his eyes were drawn to a straight, wide cloud, which he followed all the way to Orange County.

“I didn’t know where it was taking me, but I followed it,” said Tallarico, who took a photo of the cloud and keeps it to this day. “It dumped me in Anaheim.”

Tallarico found a job selling keyboards at a Guitar Center in Santa Ana. On his first day on the job, and his third day in California, Tallarico wore one of his three T-shirts, which was emblazoned with the logo for the TurboGrafx-16, a Japanese gaming console. The first person Tallarico waited on happened to be a producer for Virgin Mastertronic, later Virgin Interactive.

“He was looking for some software program to make music with and he sees my TurboGrafx-16 shirt and he knew what it was,” Tallarico said. “I proceeded to download 21 years of video game knowledge on this (this guy.)”

Tallarico was then offered a $6-an-hour job as a video game tester for Virgin, tasked to find bugs and errors. Every day, Tallarico said he begged executives to let him produce music. Four months later, he got his first project and produced the soundtrack for the original Prince of Persia video game.

In 1992, Tallarico and his team of music producers produced Disney’s Aladdin, a game that earned critical success—uncommon for movie-based video games.

“We were the hottest team in the video game industry,” Tallarico said.

Two years later, he and his friend, Dave Perry, formed their own companies, Tommy Tallarico Studios and Shiny Entertainment. With Perry, Tallarico composed music for games like Earthworm Jim and MDK.

In 1997, Tallarico moved to San Juan Capistrano’s affluent Hunt Club neighborhood. He said he was drawn to the city for its open space and it reminded him of small towns back home.

A busy touring schedule with VGL keeps Tallarico away from home, but on June 11, he’ll be able to make the short drive up to Los Angeles for a performance at the Nokia Theatre and another show at Embarcadero Marina Park in San Diego on July 24.

VGL shows feature live orchestras and vocal performances of popular video game music set to videos and interactive segments. The shows, he said, appealed naturally to regular gamers but opened the eyes and ears of newcomers.

“When non-gamers come to our show, they leave it with a greater understanding and respect. They see the artistic side,” Tallarico said. “I want to prove to the world how culturally significant and artistic video games have become. I also want to help usher in a whole new generation to appreciate the symphony. It’s a show for everyone.”