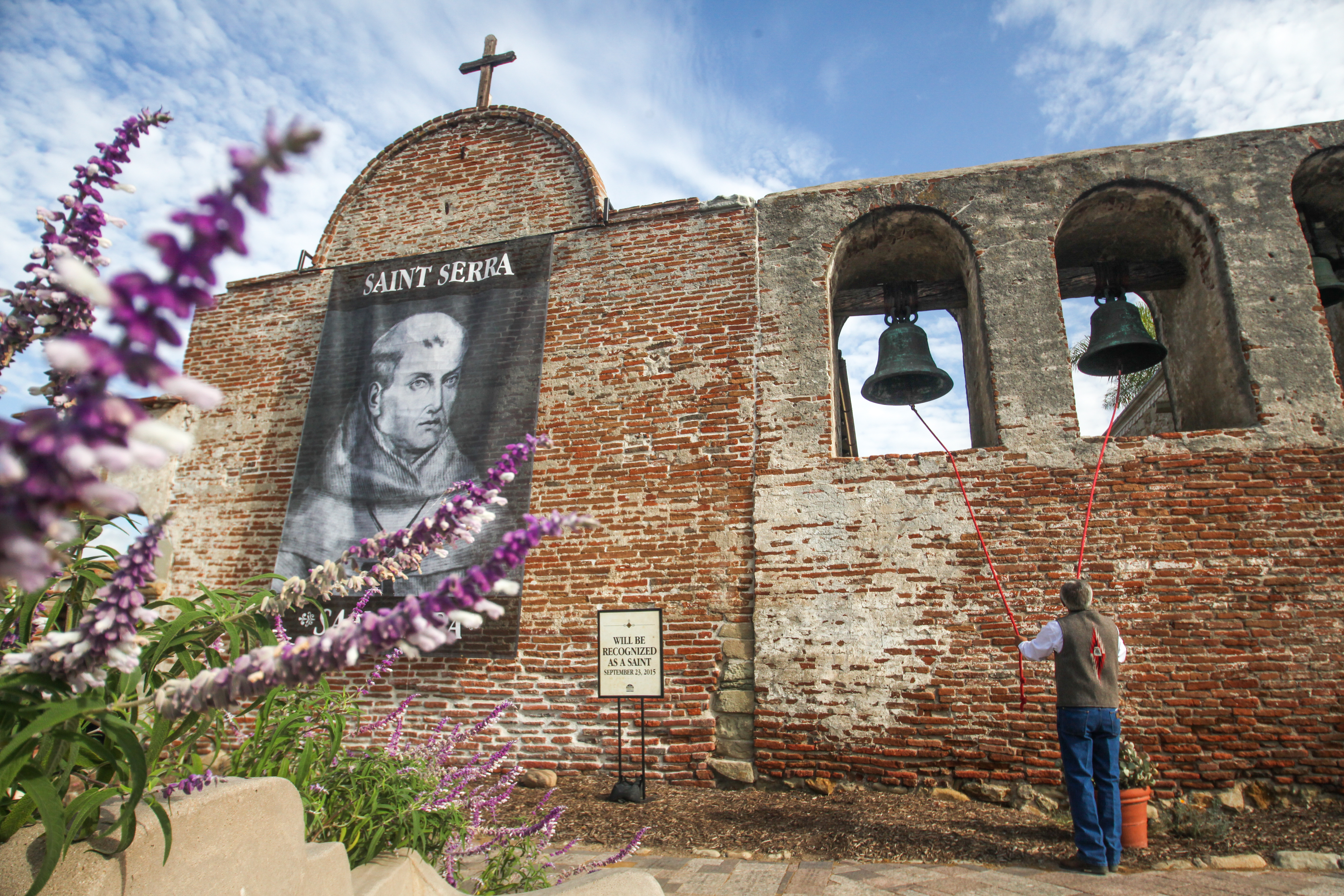 The Making of Saint Junípero Serra

Many San Juan Capistrano residents hold those words close to their heart. They’re the words of Junipero Serra, an 18th century missionary who founded Mission San Juan Capistrano in 1776, and they’re the same words that Pope Francis used during his homily Wednesday afternoon at the Basilica of the National Shrine in Washington, D.C.

The Mass represented the first canonization to take place on American soil, as well as the first time Pope Francis has traveled to the United States. His message throughout Serra’s canonization Mass was one of moving forward with compassion and joy.

“Father Serra had a motto which inspired his life and work, a saying he lived his life by,” Pope Francis said in Spanish. “’Siempre adelante.’ Keep moving forward. For him, this was a way to continue experiencing the joy of the gospel, to keep his heart from going numb, from being anesthetized. He kept moving forward because the lord was waiting. He kept going because his brothers and sisters were waiting. He kept going forward to the end of his life. Today, like him, may we always be able to say, ‘Forward, let’s keep moving forward.’”

Serra’s canonization continues to represent many firsts for San Juan Capistrano as well. During a special Mass of Unification and Celebration on Aug. 31 in the Serra Chapel, it was announced by Orange County Bishop Kevin Vann that Father James Nieblas, a Catholic priest and member of the Juañeno Band of Mission Indians, Acjachemen Nation, would represent his tribe and meet with the pope in D.C.

Others from San Juan Capistrano also made the trek to see Pope Francis, including 16 students and three faculty members from JSerra Catholic High School. Upon their return, students and faculty will join the entire campus community along with Bishop Kevin Vann for a Mass honoring Serra. Students will even be encouraged to take a #SelfieWithASaint at lunchtime.

Back in San Juan, more than 200 people gathered at Mission San Juan Capistrano for a live streaming of the canonization Wednesday afternoon. Residents, visitors and Mission patrons watched on as Pope Francis canonized the man who once walked the Mission grounds.

But there were also protestors outside of the Mission, one who has been attending events over the last five months in order to peacefully voice her opposition against Serra’s canonization. Jill Ferguson of Dana Point stood Wednesday afternoon, with signs reading “’It’s just not the truth.’”

“This was slavery, the Indians were slaves,” Ferguson said. “He wasn’t protecting them from the Spanish, he was protecting his interests in his slaves. He called them his Indians.”

As Ferguson continued to stand on the corner, three girls approached her, asking for a photo. Other passersby snapped away from a distance. Ferguson shuffled through her stack of homemade signs. “Can you hold the ‘Native Lives Matter’?” one of the girls asked. Ferguson was happy to oblige.

During a lecture given by Reverend Monsignor Arthur A. Holquin, pastor-emeritus of Mission Basilica San Juan Capistrano, the day before Serra’s canonization, Holquin addressed much of the controversy surrounding Serra’s history with the Native Americans.

“I am not a Native American, and so the deeply felt perspectives and narratives that strongly object to Serra’s canonization, are not my experience,” Holquin began. “In the end however, that critique must stand or fall based on the facts of his life and legacy.”

Holquin then offered his personal reflections and perspectives on the matter.

“The Church tomorrow is canonizing the man, not the colonization enterprise that he was a part of,” Holquin said. “It is indisputable that the Spanish conquest of the New World failed to respect the inherent dignity of the indigenous people of this land and was the catalyst certainly for not only cultural genocide, but in some respects, literal ethnic genocide.”

Holquin described Serra as an advocate for the Native Americans, acknowledging that while corporal punishment was indeed used, judging 18th century missionary techniques by 21st century standards is “unfair.”

Holquin noted that Pope Francis asked the people of Bolivia recently for forgiveness for that very reason. During the Mass on Wednesday, the pope referred to Serra as “the embodiment of a church which goes forth, a church which sets out to bring everywhere the reconciling tenderness of God.”

“Junipero Serra left his native land and his way of life. He was excited about blazing trails, going forth to meet many people, learning and valuing the particular customs and ways of life,” Pope Francis said. “He learned how to birth and nurture God’s life in the faces of everyone he met. Junipero sought to defend the dignity of the native community, to protect it from those who had mistreated and abused it—mistreatment and wrongs which today still trouble us, especially because of the hurt which they cause in the lives of many people.”

Mechelle Lawrence-Adams, executive director of Mission San Juan Capistrano, said she hopes people of all perspectives can continue to learn from the past while coming to the table educated on all aspects of the history the Mission is steeped in.

“I think California’s cultural history, its rich diversity, its traditions, the commerce, the spiritual anchors of our entire state are rooted in the legacy of Father Serra,” Lawrence-Adams said. “For me, that’s indisputable.”