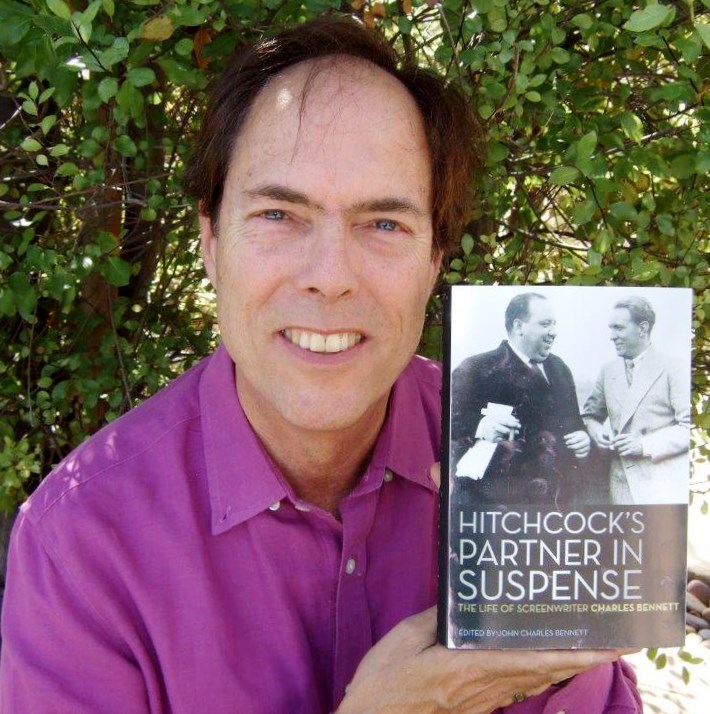 The Man Behind Hitchcock

The life and career of British screenwriter Charles Bennett is brought to life, thanks to his son

A lot has been said and documented about Alfred Hitchcock, the “Master of Suspense” in cinema. He was a genius, a menace and an icon. But what very few people seem to know or even notice is that behind the man behind the camera was a writer who aided him on his way to fame and legacy.

Fellow Briton Charles Bennett wrote many of Hitchcock’s early films and for the first time ever, his own behind-the-scenes story is coming to life on the page, thanks to his son.

Charles was in the process of writing his memoir when he suddenly died in 1995. His son, John Bennett, a San Clemente resident and science teacher at St. Margaret’s Episcopal School, took on the project. It would take another decade of locating all of his father’s old journal entries and notes to edit them into a book and yet another 10 years before the editing would be complete. Finally, on April 6, John released his father’s memoir, Hitchcock’s Partner in Suspense, which traces his father’s life and close—but often strained—professional relationship with Hitchcock.

“This isn’t meant to be seen as gossip or dirty laundry,” said John, who penned four chapters himself to conclude where his father had left off, with recollections of the elder Bennett’s career and life in Hollywood. “It’s an inside look at my dad’s experience, technique and opinions on the film industry as a business.”

Charles was a renaissance man of sorts, with a 75-year-long career spanning the 20th century through literature, theatre, film and television. Coming from a lower-class acting family in England, Charles began his career early on as a child actor on stage and in silent films. He would later go on to work in Shakespearean theater for 15 years.

By the time he was an adult, Charles had already added writing to his resume and written several plays. When Hitchcock expressed interest in adapting Charles’ Blackmail as a “talkie” in 1929, a love-hate partnership was born.

As Charles moved to Hollywood to become a freelance writer, his film experience blossomed by helping create concepts and scripts for directors, including Hitchcock and others like Cecil B. DeMille. With Hitchcock, he created seven films, including Blackmail, The Man Who Knew Too Much (1935), The 39 Steps (1935), Sabotage (1936), Secret Agent (1936), Young and Innocent (1937) and Foreign Correspondent (1940).

Charles seemed to have an impressive reputation as it was. Though he got an Academy Award for Best Original Screenplay for Correspondent, Charles didn’t attend the ceremony in 1941.

“He didn’t really care for that kind of thing, as much as making the movies,” said John. But despite his famous efforts and friendships, Charles would somehow always be overlooked in the Golden Age of film history.

Though he spent years working with Hitchcock and others in cinema, Charles was also a decorated war hero for England during World War I and was an Allied spy and helped make propaganda films during World War II, said John.

While Charles spent his time working in all mediums of entertainment, John leads a more quiet life.

“Science is more my interest, but I appreciate my father’s stories and work,” he said. “I was more fascinated by the environment and physics early in my life.”

John felt that if he didn’t finish his dad’s last project, he might continue to be overlooked. The memoir, he said, is homage to his father’s secret legacy.