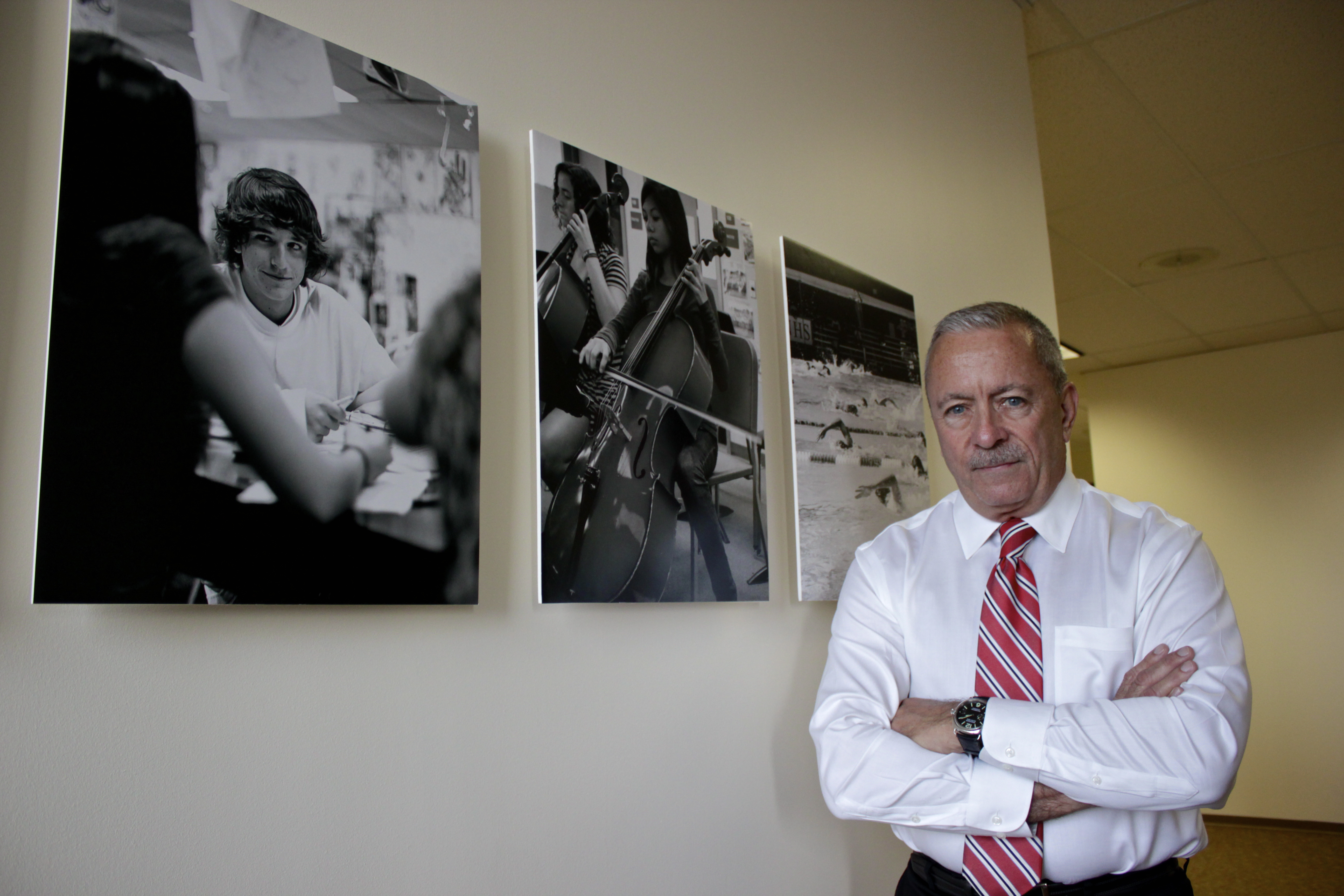 The Steward of Capistrano Unified

By Brian Park and Jim Shilander

When a journalist “buries the lede,” it means he or she fails to quickly get to the crux of a story.

For Capistrano Unified School District Superintendent Joseph Farley, a former newspaper reporter, writing the story of the district’s recovery from years of turmoil meant opening with a strong lede and acknowledging the problem from the start.

“I was absolutely, brutally honest about the flaws and the strengths of the school district,” Farley said of his first days at the head of CUSD in 2010. “My essential message was we’re going to stop all these squabbles, all this political conduct that’s absorbing our time, and we’re going to focus on classroom instruction and on kids.”

Four years later, Farley’s deadline has now arrived. As he promised when he was hired, Farley will retire at the end of his contract, June 30.

“Everyone knew from the first day I’d only be here for four years, then they would transition into another superintendent who would take the district from some relative tranquility and stability to even greater levels of achievement, which I think will be possible,” Farley said.

The school board has had a more difficult time writing a follow-up story—that is, finding Farley’s replacement—than expected.

The district planned to name its next superintendent in May, after hiring the national search firm Hazard, Young, Attea & Associates, which initially recruited Farley and where he is expected to take on a part-time job. But last month, trustees hired a new consultant, La Quinta-based Leadership Associates—the same firm that recruited Farley’s predecessor, A. Woodrow Carter, who clashed with the board and was fired in 2009, after just two years on the job.

Trustee Anna Bryson, who was board president when Farley was unanimously hired, said the board was looking for someone specific to follow Farley.

“He has laid a magnificent groundwork that for whoever comes. They will be very fortunate because the hardest turning around has been achieved and now it’s full steam ahead,” Bryson said.

When Farley was hired in 2010, he became the district’s seventh superintendent in four years.

Longtime superintendent James Fleming retired in 2006, but less than a year later, he was indicted for allegedly compiling an “enemies list,” which identified parents who had been critical of the district.

Five superintendents followed, including Dennis Smith, who resigned after one month, three interim administrators and Carter.

The board fared no better. In 2008, disgruntled parents successfully recalled trustees Sheila Benecke and Marlene Draper and replaced them with Sue Palazzo and Ken Maddox. But in 2010, Maddox and Mike Winsten were recalled and replaced by current Board President John Alpay and Trustee Gary Pritchard. Trustee Lynn Hatton was also elected over incumbent Larry Christensen.

That year, before the election, the teachers union also went on a five-day strike over pay cuts.

When he came in to interview, Farley said he had to be brought in secretly to avoid picketers.

“That was kind of an unusual circumstance,” Farley said.

At the time, the job was far from ideal, given the myriad of controversies surrounding the district, as well as the statewide financial crisis that would force the district to cut $150 million from their budget and shorten the school calendar.

But for Farley, the job was perfect.

Farley, who has been an educator for 41 years, developed a reputation as a problem solver. Before coming to CUSD, he spent five years as superintendent of the Anaheim Union High School District. Like CUSD, he brought an end to a period of high turnover, which saw three superintendents in as many years.

Public confidence in Anaheim Union was low, and just over a week after Farley started, the Orange County Grand Jury began an investigation into the district’s management of a multi-million dollar construction bond. A year later, the Grand Jury praised Farley’s work in handling the situation and said it was a model for other districts.

Bryson said Farley’s reputation as a problem solver was a definite factor in his hiring, which she called, “one of the proudest things I’ve ever done.”

“He had confronted problems that were very severe in his prior district, and with calm intellect and consistent strength of administrative oversight, he righted that ship,” Bryson said.

Alpay said early on in his dealings with Farley as a trustee, he understood the focus would be on the classroom.

“It became very clear to me that he was trying to reassert control,” Alpay said. “It was really a ‘Damn the torpedoes, full speed ahead,’ kind of thing.”

That attitude was key, Alpay said, to reestablishing a sense of district stability, reminding board members of their responsibilities to students.

Alpay said that had carried over to the relations between the board members themselves.

“We don’t agree on everything, we’re seven people with seven different opinions,” Alpay said. “But I can say wholeheartedly that we’re all unified in our objective to provide our children with a quality education. I think we’ve all learned to be respectful and get along with each other because we’ve understood our interests are aligned.”

Farley said, as a journalist, he enjoyed taking complicated issues and explain them as simply as possible. He applied those skills as a school administrator.

“I have to teach something. I have to do it briefly and succinctly with the fewest words possible,” Farley said. “I’ll take something incredibly complex—you could name it, there’s one every day in the school district—and I’ll have to communicate that to someone.”

After his first year, trustees, school administrators and parents praised Farley’s open-door policy and his honesty, even when the news was not always good. Farley challenged educators when he took over, said George Duarte, the former principal at San Clemente High School and current principal at Ladera Ranch Middle School.

“He recognized the high performance of the district, but he also said we could do better to meet the needs of all children,” Duarte said. “Joe Farley brought stability to the district and kept the focus on students and on instruction.”

The greatest challenge, however, that will likely confront Farley’s successor is having to deal with the aging facilities found throughout the district. During the height of its fiscal crisis, the district was forced to raid its deferred maintenance reserves, meaning issues at some schools have not yet been addressed.

“It’s not just old campuses. It’s new or relatively new campuses that also have needs that when you total them up represent an awful lot of money,” Farley said.

He also noted that the district is not growing evenly. Some schools, such as Marblehead Elementary in San Clemente and parts of Dana Point, have seen declining enrollment in recent years. The district must also prepare to house Rancho Mission Viejo students and is already planning for a K-8 school there.

“The trouble is that the growth isn’t where we have the decline,” Farley said.

Solutions could be found, but they would take time, Alpay said. The district also faces attendance boundary issues and must work to unravel its community facilities districts, especially dealing with population pressures at San Juan Hills High School.

Farley said the district needed to find a way, over the course of several years, to fund the modernization of some of its facilities. The district currently has 10 Mello-Roos CFDs, which have restrictions about using funds for maintenance of existing buildings. Solutions might include creating a district-wide facilities bond or one specific to certain areas, after paying existing CFDs. The board, while aware of the issue, has not yet formally discussed a solution, which would require public input.

“We didn’t get here overnight and it’s going to take a couple of years to get back out,” Alpay said.

But despite future challenges, Alpay said Farley has lived up to his reputation as a fixer.