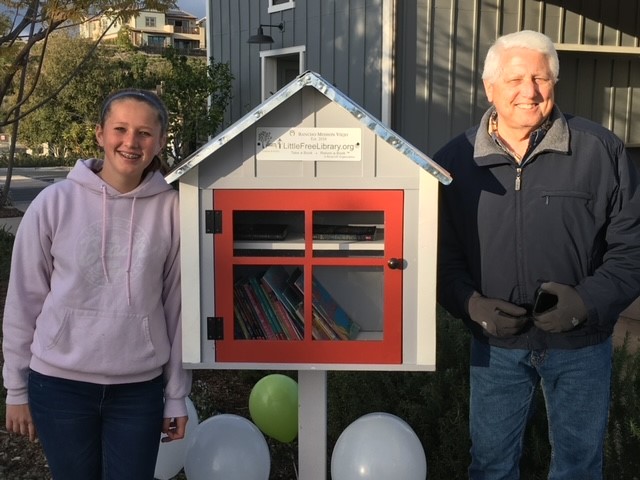 The Story Behind the Little Free Library at Esencia Farm

If you’ve walked by the Esencia Farm in Rancho Mission Viejo, you might have noticed a tiny wooden library full of free books to grab and read—and even been curious about how the mini-library came to be.

As it turns out, the literary resource was the result of a Girl Scout project.

Kelly McNamara—who lives in RMV, down the street from the library—wanted to earn her Silver Award with the Girl Scouts, and thought building a small library for the community would make a good award project.

“I went to (the heads of) RMV and asked them if I could do it. I wanted to promote reading. They said, sure,” said McNamara, who is now 17 and a senior at Tesoro High School. “I like reading. I didn’t get to do enough of it outside of school.”

His experience with woodworking—a realm McNamara was unversed in before constructing the library—didn’t hurt, either.

“It was natural, because we’re already pretty close,” McNamara said. “He cut everything, and I actually put it together. It was a bonding experience for us.”

The project was finished in 2018, and McNamara still sees people use it “all the time” four years later, when she works at Canyon Coffee, a nearby coffee shop.

“It was a lot of hard work,” McNamara said of the project. “It took a lot of time. We had to get the measurements right.”

When the library opened, McNamara described her reaction as “nonplussed,” because she spent so many nights on bringing it to fruition. As time goes on, though, seeing people casually take out books means “a lot more” to her now.

In fact, McNamara often finds herself organizing the book selection by hand. She has been recognized as the person who created the library while straightening books.

She said the free library is a convenient option for RMV residents—particularly for residents who live in the Gavilan neighborhood, which is geared toward those who are 55 years of age or older.

Along with the adult books, there is also children’s literature. The library in Esencia is one of three little free libraries in RMV. The other two are at the Sendero Farm and The Backyard park. Little free libraries are popping up throughout the country, and are part of the Little Free Library nonprofit book exchange program.

“This is probably the best place for people to grab a book and hang out at,” McNamara said, in reference to the library’s proximity to Canyon Coffee and the general outdoor space nearby. “A lot of my neighbors have told me they use it. A lot of kids I babysit use it, too.”