To the Class of 2013: You Can Help Shape San Juan’s Future

This article is addressed especially to those who are graduating from high school and college this month. As you embark on your future endeavors, always remember that one person can make a difference in society.

We recently returned from a trip to the East Coast, where we spent time in Gettysburg, Pa. This year marks the 150th anniversary of President Lincoln’s Gettysburg Address. This speech is often called the greatest speech ever given in this country. And it almost did not happen.

In 1862, Congress passed a law designating various places in the United States for national cemeteries. Gettysburg was not on the list. An attorney in Gettysburg, David Wills, wrote first to the governor of Pennsylvania and finally to the president requesting that Gettysburg be made available for a national cemetery. Solely through his efforts, Gettysburg was so designated and on November 19, 1863, President Lincoln consecrated this site with his famous Gettysburg Address.

In San Juan Capistrano, we have many people who have come forward and made a difference in our community. The following is a partial list of people who have contributed to the success of our town. There are many ways to serve the community and in a few years your name could be added to this list.

Father St. John O’Sullivan came to San Juan Capistrano in 1910 and became known as the “great restorer of the Mission.” Without his efforts, it is possible that the Mission would not exist today.

Ilse Byrnes is the person primarily responsible for putting the historic buildings in San Juan Capistrano on the National Registry of Historic Places. Her work has ensured that those places will be saved for future generations to enjoy.

Clarence Lobo was the first Juaneño to take the fight for Indian rights to Washington, D.C. in the 1960s. He was elected chief of the Juaneños in 1946. He was the first Native American to serve on the San Juan Capistrano Planning Commission and the first to serve on any planning commission in the United States.

David Belardas has kept the Juaneños’ culture through the Blas Aguilar Foundation. By collecting and preserving local artifacts, the Blas Aguilar Adobe is a museum that captures our early history.

Tony Forster was president of the San Juan Capistrano Historical Society for 17 years. He was dedicated to the preservation of the town’s history. His vision for creating a historical park that reflects the complete history of San Juan Capistrano is being carried on today by members of the Historical Society who shared in his vision. He also served as a planning commissioner, city councilman, mayor and cultural heritage commissioner. His other two passions were playing Santa Claus for family and friends and his membership in the famed riding group, El Viaje de Portolas.

Randi and Joel Peshkin had an idea about bringing arts and crafts to San Juan Capistrano and after several years, they convinced the city to hold the Second Saturday Art Fair. The Peshkins are the leaders of this successful event.

Marianne Taylor saw that the landscaping in Los Rios Park was growing out of control. She formed a group that oversees the maintenance of the plants and flowers in the park, the Los Rios Garden Angels.

Bob Kline and Stephanie Heredia had an idea about bringing a film festival to San Juan Capistrano like the festival that Bob started in Palm Springs. The West Coast Film Festival successfully debuted in 2011 and the third installment is scheduled for August.

As you can see, this is a diverse group of people who have each contributed to our community. You can spend a Moment In Time by going to the Historical Society and checking out other people who have made a difference in San Juan Capistrano.  Will you become part of the many volunteers who have actively contributed to San Juan Capistrano? Remember, one person can make a difference. 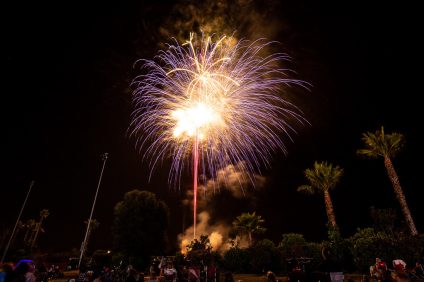