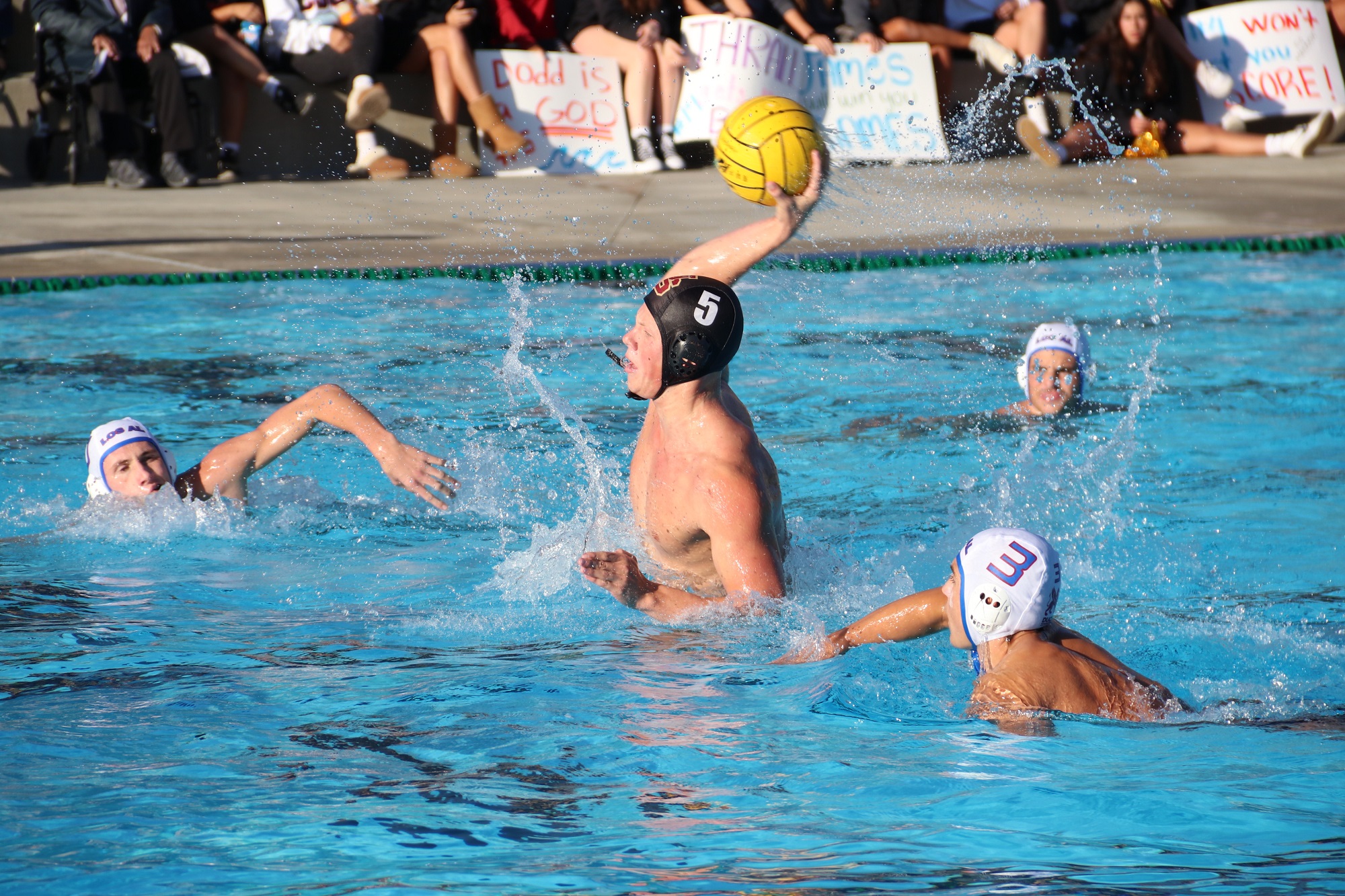 SAN JUAN CAPISTRANO – The trajectory of the JSerra boys water polo program in its fifth year under head coach Brett Ormsby has brought the Lions from a losing and winless league record in 2018 to the program’s first Trinity League title and the top seed in the CIF-SS Open Division in 2022.

JSerra took its first step to proving it truly has become the best of the best in Southern California on Thursday, Nov. 3, and even without Ormsby on the bench, the Lions were just as dominant a forced as they’d been built to be.

After a tight first quarter, JSerra exploded for six goals in the second quarter a nine of the next 10 goals to completely shut down Los Alamitos, 13-5, in an Open Division first-round game at JSerra Catholic High School.

“Frankly, under the circumstances, what stood out was the resiliency and mental toughness that our guys showed,” JSerra assistant coach Drew Clute said. “Brett not being here, there was definitely a moment of adjustment that had to take place, but there was an immediate flip of the switch and we were on to the next.”

Ormsby was serving a one-game suspension due to a red card in the team’s league finale against Orange Lutheran, and despite JSerra’s efforts to sneak in a non-league game just before the playoffs to get that suspension off the books, CIF-SS deemed that a no-go.

JSerra (24-2) will get Ormsby back on the bench for the Open Division semifinals on Wednesday, Nov. 9, against league rival Mater Dei at the Woollett Aquatic Center in Irvine. The Lions downed the Monarchs in Trinity League play, 12-9, on Sept. 9 at JSerra.

JSerra is looking to win its second CIF-SS title in program history, after the Lions captured the 2019 Division 4 title over San Juan Hills.

In the early stages on Thursday, JSerra couldn’t capitalize on a six-on-five opportunity and hit a few shots off the post, including a five-meter penalty.

“I felt like we were doing two or three or four things well, and we just weren’t able to finish something,” Clute said. “I felt like going into the second quarter the dam would break, and it broke.”

The scoring deluge actually opened in the final minute of the first quarter, as the teams combined for three goals in the final 50 seconds. Ryder Dodd opened with JSerra with a goal off the rush, and Bode Brinkema scored from distance with 13 seconds left to put the Lions back up, 2-1.

In the second quarter, JSerra started clicking with quick and precise ball movement.

The Lions fed Will Schneider in the middle for the first of his five goals in the game 30 seconds into the quarter, and Dodd stuck again on a six-on-four chance to put JSerra up, 4-1.

After a Los Alamitos goal, Johann Thrall netted a one-time goal off a cross by Maddox Arlett to restart the JSerra scoring machine. Schneider scored back-to-back with a turnaround shot after the ball was worked around and set back low and on a quick feed from Brinkema to the middle.

“Especially against Los Al, the way their set defender plays,” Schneider said, “the ball movement, just swinging the ball fast around the perimeter, staying high on our legs and playing before the foul was just incredibly important. Sometimes we’re swinging the ball until five seconds left, and then we’re getting the late entries, that was crucial part to my success as a center.”

Tas Palcza scored on the rush on an assist from Colt Bradley with 22 seconds left in the quarter for an 8-1 lead at the half.

From there, the goals came more methodically from JSerra, as the Lions focused on locking down the defensive end and received numerous stops in the cage from senior goalkeeper Jack Helfer.

“I loved the ball pressure today,” Clute said. “I think we had five or six perimeter steals on the flight of the ball from the one side to the other.”

JSerra led 13-2 in the fourth quarter before Los Alamitos salvaged a few strikes after a wave of Lions substitutes hit the pool, but it was far too little far too late, as JSerra sprinted off with the first-round victory.

Along with Schneider’s five goals, Dodd, Thrall, Palcza and Brinkema each scored two goals to round out the JSerra scoring line.