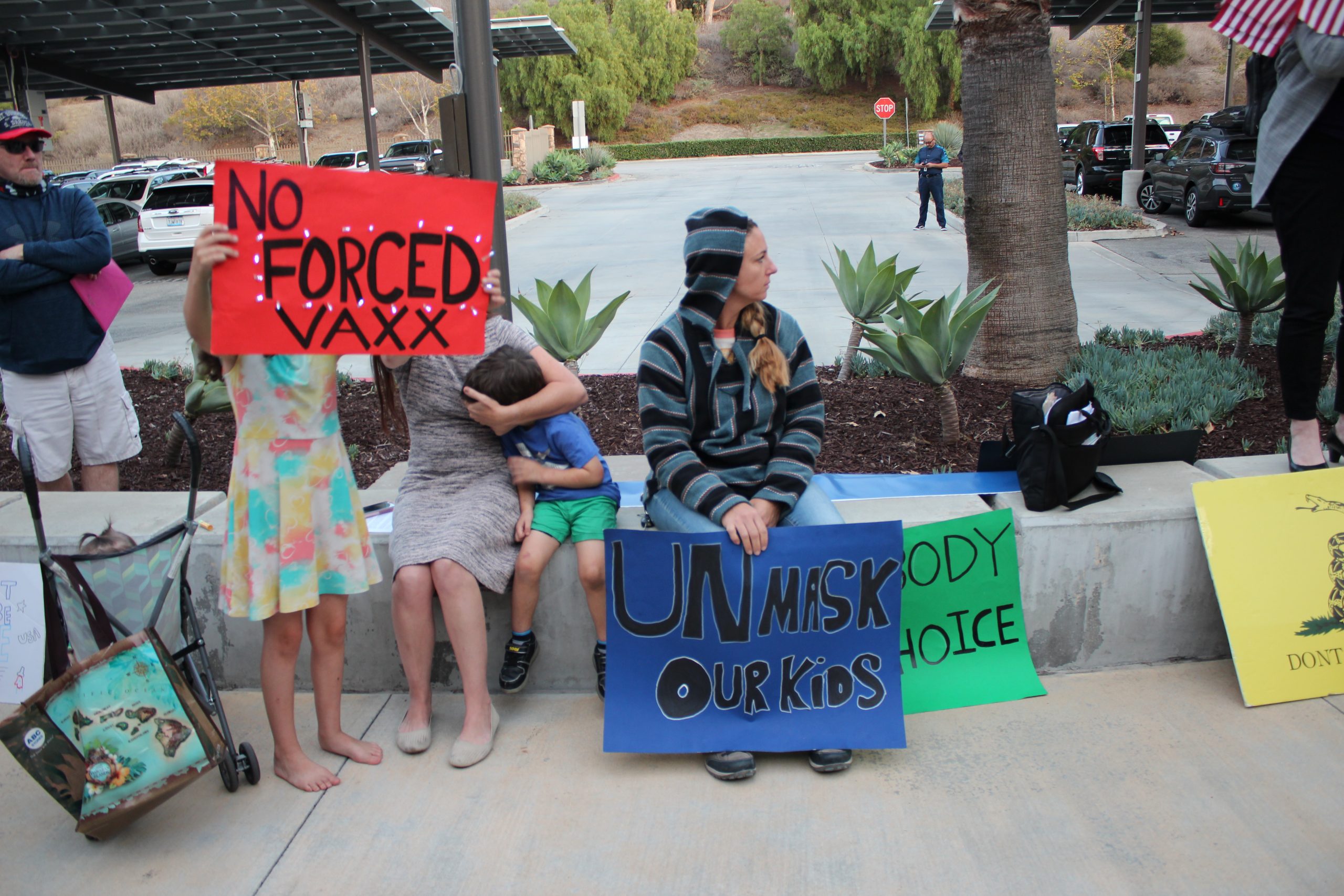 Though statewide COVID-19 restrictions have not been in place in California for some time, pandemic protocols were again the topic of discussion during a Capistrano Unified School District Board of Trustees meeting on Wednesday, Aug. 17.

The board on Wednesday did not take any action on proposed measures addressing health guidelines, but it is expected to vote on a resolution at a Sept. 21 meeting that calls for local control of school COVID-19 guidelines, which are currently set by the California Department of Public Health.

Some local parents and CUSD officials have spoken against restrictions being under state control, instead preferring such decisions be made at a county or individual level.

A similar but separate item on the agenda was a citizen’s request from board candidate Kira Davis for students and families to have a choice in wearing masks if masks are ever mandated again. The trustees did not extensively deliberate over the request, nor did they vote on it.

Kira Davis is running for the vacant Area 2 seat in a special election this November, after former Trustee Pamela Braunstein resigned because of what she said was harassment for her support of COVID-related guidelines.

Restrictions were initially lifted in the state of California in summer 2021, and masks are no longer required of students on campus after that rule was lifted earlier this year. While counties and school districts can enact stricter regulations than current state rules—such as was previously instituted in the Los Angeles Unified School District—those jurisdictions cannot be more lax than CDPH guidelines.

Students, teachers and faculty have largely foregone masks when returning to campus for the start of the 2022-23 school year this week. There are also no social distancing or vaccination requirements, either.

The resolution up for discussion next month requests that COVID rules instead fall under the Orange County Health Care Agency. If passed, the resolution would call on local state lawmakers and other elected officials to ask that state health officials delegate “final responsibility” on COVID protocols to local jurisdictions.

It was initially on the agenda for the Aug. 17 meeting and even came down to a 3-2 vote against its passage, with Trustee Lisa Davis absent. Trustees Krista Castellanos, Amy Hanacek and Gila Jones voted against the resolution, while Trustees Judy Bullockus and Martha McNicholas voted in its favor.

Jones had supported the resolution during an initial vote but switched her “yea” to a “nay” after the board realized that four votes are needed for it to pass. Because the current six-member board is down one trustee, a four-person majority is required.

Trustee Davis, who has frequently spoken against COVID-19 restrictions and masks, left the meeting before the vote. Board members decided to reconsider the measure when they had all trustees in attendance.

The resolution was brought forth by Bullockus, another opponent of state-mandated pandemic restrictions, with collaboration from Jones.

“The original aim of the COVID-19 response was to save lives and to keep our hospital system and intensive care units from being overwhelmed, but in the state of California, one size does not fit all,” Bullockus said. “We believe that the establishment of the COVID-19 protocols are best left to the local public departments, and not to Sacramento issuing for the entire state of California.”

The call for more local control would be done through requests to Gov. Gavin Newsom and state officials, and also invites the Orange County Board of Supervisors to get involved in the plea.

“I know that it seems to many people that we’re these school board members and we have all this power. We really don’t have the kind of power that boards of supervisors have,” Jones said. “If this passes, I hope people will contact our member, Lisa Bartlett, and encourage her to do this. If you know people elsewhere in the county, encourage them to contact their supervisor. There could be enough energy in this that it could happen.”

Jones brought up the recent outbreak of monkeypox in the U.S. as an example of why she wanted more local control on public health.

“There are probably counties that are never going to see a monkeypox case—some of the small, rural counties,” Jones said. “It would be very sad if the state were to put in some monkeypox restrictions for the entire state when there might be 10 or 12 counties that were totally unaffected, and the same thing could happen with other health issues.”

Hanacek said the resolution and similarly proposed resolutions are “dependent on some outside source and, thus, have no board action, as they have no legal force or effect.”

Numerous local parents at the meeting said they were against the proposed resolution, because they instead preferred health decisions instead be made individually by families.

As for the request from Kira Davis for masks to be optional on school campuses, board members noted that they previously voted down similarly proposed resolutions—including one in March proposed by Lisa Davis days ahead of the state lifting school mask requirements.

“After two years of uncertainty and chaos surrounding mandates and our children, we are exhausted. With LAUSD and San Diego Unified both attempting to reinstate mask mandates for their students, it’s becoming clear that the walls are closing in on our district,” said Kira Davis, who lives in Ladera Ranch. “We feel it (is) necessary to the mental health of our students and the comfort of our parents for the Board of Trustees to officially adopt a resolution supporting mask choice in CUSD.”

Los Angeles Times reported that Los Angeles Unified school leaders walked back more restrictive measures before the start of the school year and are instead allowing masks to be optional on campus.

Health experts have generally said masks and other pandemic restrictions help halt the spread and limit the severity of COVID-19.

Parent Michele McNutt spoke against Davis’ request and said the board has no control over health mandates.

“That’s been clearly explained over and over at several board meetings, including the last meeting in July and this meeting. This resolution was written by a political candidate trying to stir up rage and panic. We are currently in a state of mask choice,” McNutt said.

“Resolutions lose their meaning when they are used as a political statement,” McNutt continued. “In this case, it’s being used as an attempt to force board members to show where they stand on a very divisive issue—an issue that isn’t even in your control.”

Superintendent Kirsten Vital Brulte also addressed other COVID-19 rules at the start of the meeting.

“We only follow the requirements for employee testing that come from CDPH. Most recently, our Board of Trustees passed a resolution to ask CDPH for an end date on testing. We inquired with CDPH about ending their testing requirements, as on a state call,” Brulte said. “However, they will not consider any changes at this point, pointing to state data on hospitalizations and deaths.”

The Sept. 21 Board of Trustees meeting will be held in the CUSD Board Room at 33122 Valle Road in San Juan Capistrano. The main session open to the public will begin at 7 p.m. Parents and other members of the public can attend in person or watch a livestreamed meeting video online on the CapoUSD Board Meeting YouTube channel. Visit capousd.org for more information.