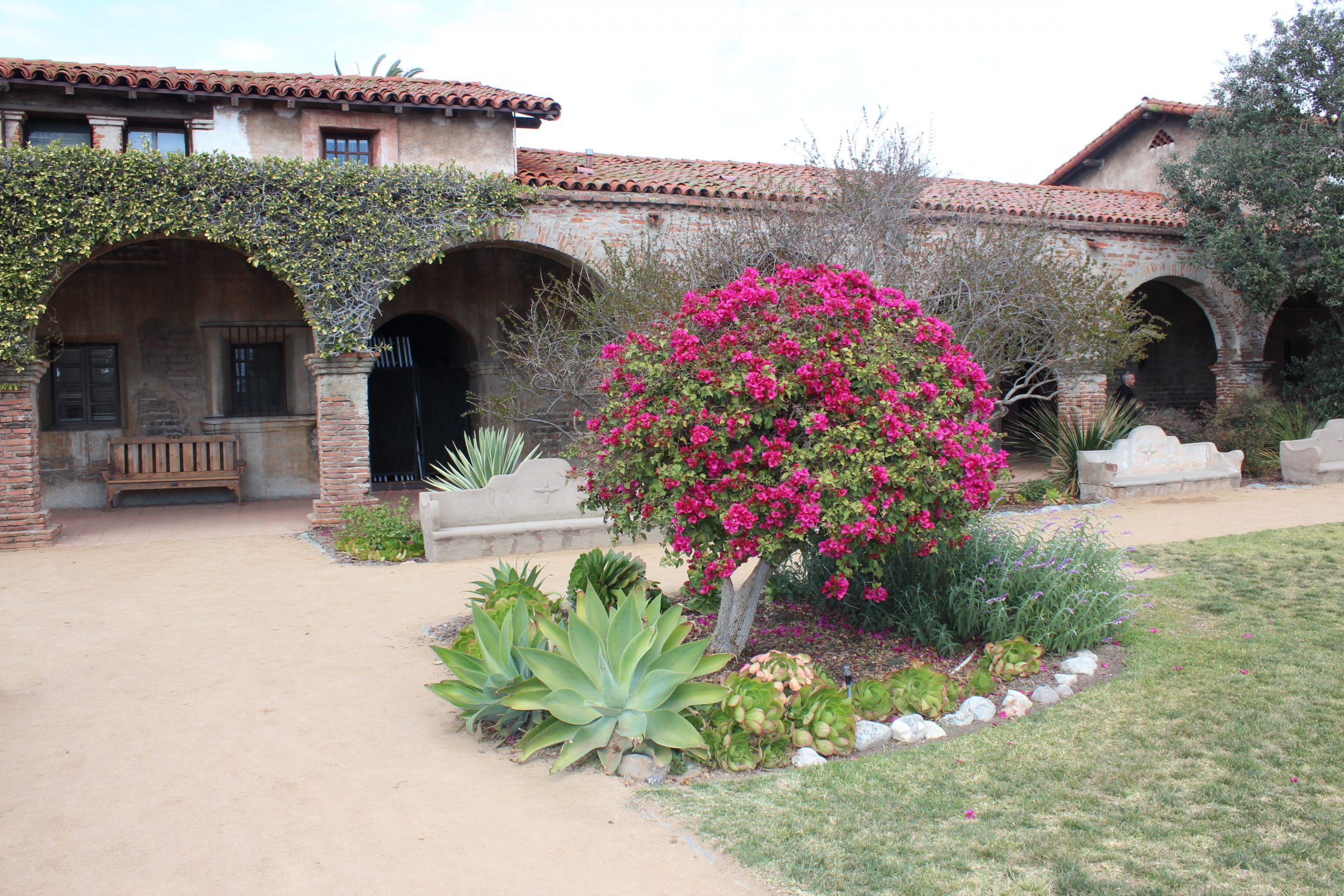 As Mission San Juan Capistrano Executive Director Mechelle Lawrence Adams puts it, the first 12 weeks of the COVID-19 pandemic were a “surprise and shock.”

The historic site and popular tourist destination was forced to close to the public, the first time it had done so in 100 years. It reopened in June 2020 and temporarily closed again later after a spike in cases.

Come March 2022—two years after the virus was declared a pandemic—the Mission is now fully open and shows no signs of closing to visitors. During the early days of the pandemic, the Mission pivoted to virtual tours and online educational opportunities for students—aspects that have carried over even as the site and world at large return to some sort of normalcy.

“Our indigenous people’s history interpretation has been so reliant on the live percentage of people being here. The pandemic allowed us to approach representatives of indigenous history in the community and say, ‘Do you mind being recorded? Do you mind allowing us to talk about your history in a permanent sense?’ ” Adams said. “We ended up developing a series of videos just specifically on our indigenous history that celebrated the relationship of the Mission to our present-day indigenous representatives. We were able to talk about our bell-ringing ceremony and who those people are.”

Those recordings are different from the pre-pandemic tradition of such history being mostly told during in-person events. The Mission ended up creating an overarching historical video that was free to any school teacher who signed up for the Mission’s educational programs.

School districts in Northern California began reaching out to the Mission as they developed the videos—which, in turn, led to the Mission creating even more videos.

“Our Earth Day program is now completely virtual. Now, it doesn’t replace on-site experiences at all,” Adams said. “It augments them, and it allowed us to have a geographical reach to learners or displaced populations or underserved communities that never would be here in the first place.”

The permanent virtual aspect of the Mission experience can reach people who are autistic, hearing-impaired, or not planning to visit the Mission.

“Part of the dynamic that has been hard for the Mission—in that we are coming out of—is making good on our public programming and yet evaluating that public programming as to what’s still really relevant and needed, and does it make sense to do so,” Adams said. “We owe the community these summer concerts that we haven’t yet had from 2020. We still owe three of them. We normally have a series of five or six concerts this summer. People bought tickets in early 2020 that we still haven’t had those concerts yet.”

Adams said they are reevaluating the future of those concerts and whether they’ll have six concerts, or instead three or four concerts, which would then allow the Mission to do other things.

Another silver lining that emerged during the pandemic was the Mission’s partnership with fellow nonprofit South Coast Repertory, which yielded outdoor theater performances at the Mission.

“We delivered two productions for nearly 20 nights last October to a super-appreciative crowd that got to go out in a safe manner and see live theater when all the theaters were closed,” Adams said.

Adams acknowledged the Mission’s budget was in the negative for earned revenues “in a huge and significant way” at points throughout the past two years—a time when the site’s Board of Directors offered words of encouragement and mentorship to Adams. They also suggested different ways of doing things at the Mission.

“I’ve been here 18 years, and the first 15-16, were a trajectory of growth and building and expanding and bigger numbers, and it was always more and more and more. Then the pandemic said we’re going to take everything away from you. You have nothing. What’s going to stick?” Adams said. “I do think what came out of it for me and the team is definitely a keen awareness that traditions matter. People need to count on places to stay true to their purpose. That doesn’t necessarily mean that every activity you’ve done has to stay the same way.”

One of those changes is a pared-down St. Joseph’s Day celebration and tapering back the level of private corporate events.

The Mission’s finances are currently still “precarious,” Adams said. The site raised some funds from a recent gala, and also benefited from grants and the federal Paycheck Protection Program.

“Those dollars are keeping us open right now. If I didn’t have those dollars to pay the labor—and we’re not open on Mondays, and we aren’t always open to the complete hours that we used to be—we wouldn’t be open if I didn’t have those dollars,” Adams said. “There is a little bit of concern on what happens when those grant dollars run out. We’re working really hard. The store is back to full numbers. Attendance on weekends is back to its old numbers.”

“We used to bring in over half a million to a million dollars in education revenue,” Adams said. “We were bringing in $27,000 last year.”

While Adams is positive the Mission will get through this, she is also cautious. The historic site is further struggling with finding employees, as are many other businesses due to changes in the labor market.

Mask requirements and tension over such were an “ugly part” at the Mission during the pandemic, Adams said. Face masks were required at the site when instituted by state regulations, which led to some grumbling from visitors, who then lashed out at staff at times. Masks, though, are no longer required at the site since mandates for such have been largely lifted throughout California.

Adams did point to positive aspects—regular Mission supporters who have sent in donations, good Yelp reviews, and great customer service provided by staff. The Mission also set up an online store—a necessity during the early days of the pandemic. Everyone within the organization is fully vaccinated against COVID-19.

“What’s the future look like? The future looks like we can have less conversations about masks and vaccines, and we can focus more on our service and stewardship,” Adams said. “We’re really excited about bringing back our traditions and what’s new. What’s new is three new exhibits this year. New audio tour. The mariachi festival gets to come back. We already had all our bands sign up.”

One new exhibit is Journey to Renewal, which celebrates the artwork contributions of local historians Jan and Warren Siegel.

“There’s a lot going on. We’re excited,” Adams said. “Our gala is all set for Sept. 16. We’ve got most of our people on board to participate.”