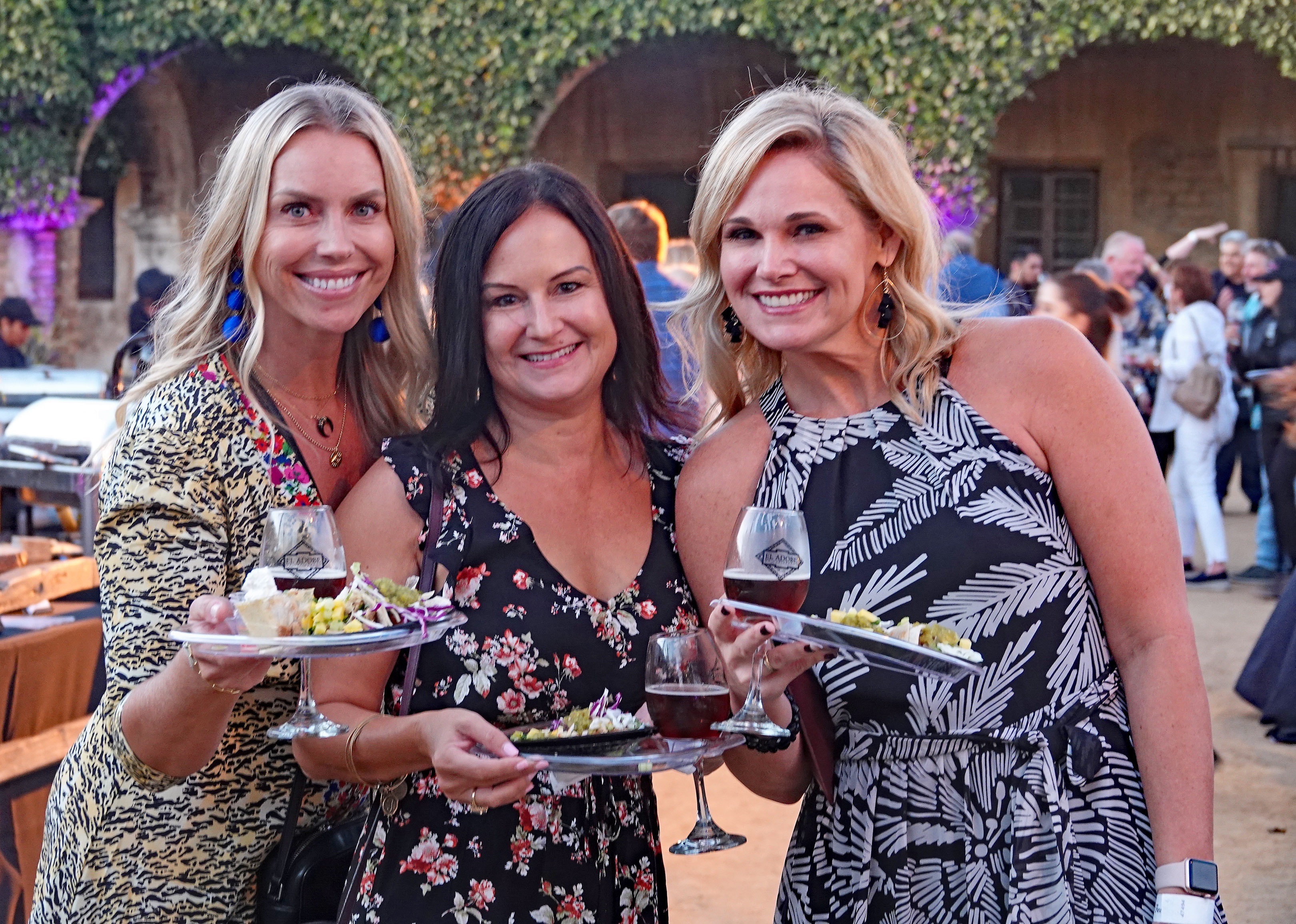 ‘The Vintage’ Wines and Dines

Chamber Bids Farewell to the Swallows with Food & Wine Festival

If Father Serra could have suddenly materialized out of thin air to appear at the 2019 San Juan Capistrano Food & Wine Festival, he’d have found himself surrounded by multicolored lights, decorated vendor booths, a 12-piece swing band on a sound stage and close to 1,000 smiling faces, sampling and serving savory foods and spirits, dancing and having a good time on the grounds of the Spanish mission that Serra founded 243 years ago.

The sainted priest no doubt would have been feted as guest of honor, toasted by all as father of the California wine industry.

He also might have been surprised to see that attendees didn’t vote any of the dozens of wines to be the most popular beverage at the Oct. 5 festival.

It was Dog Pawrk Brewing Co. of San Juan Capistrano whose beer was toasted by voters as “best sip” at the lavish party.

Then again, it wasn’t just a food and wine fest. Among the offerings from some 60 food and beverage vendors were craft beers, rums, tequilas, vodkas and specialty drinks.

H.H. Cotton’s American Bar & Grill of San Clemente was voted No. 1 among the food vendors, declared to be the “best taste” at the festival. 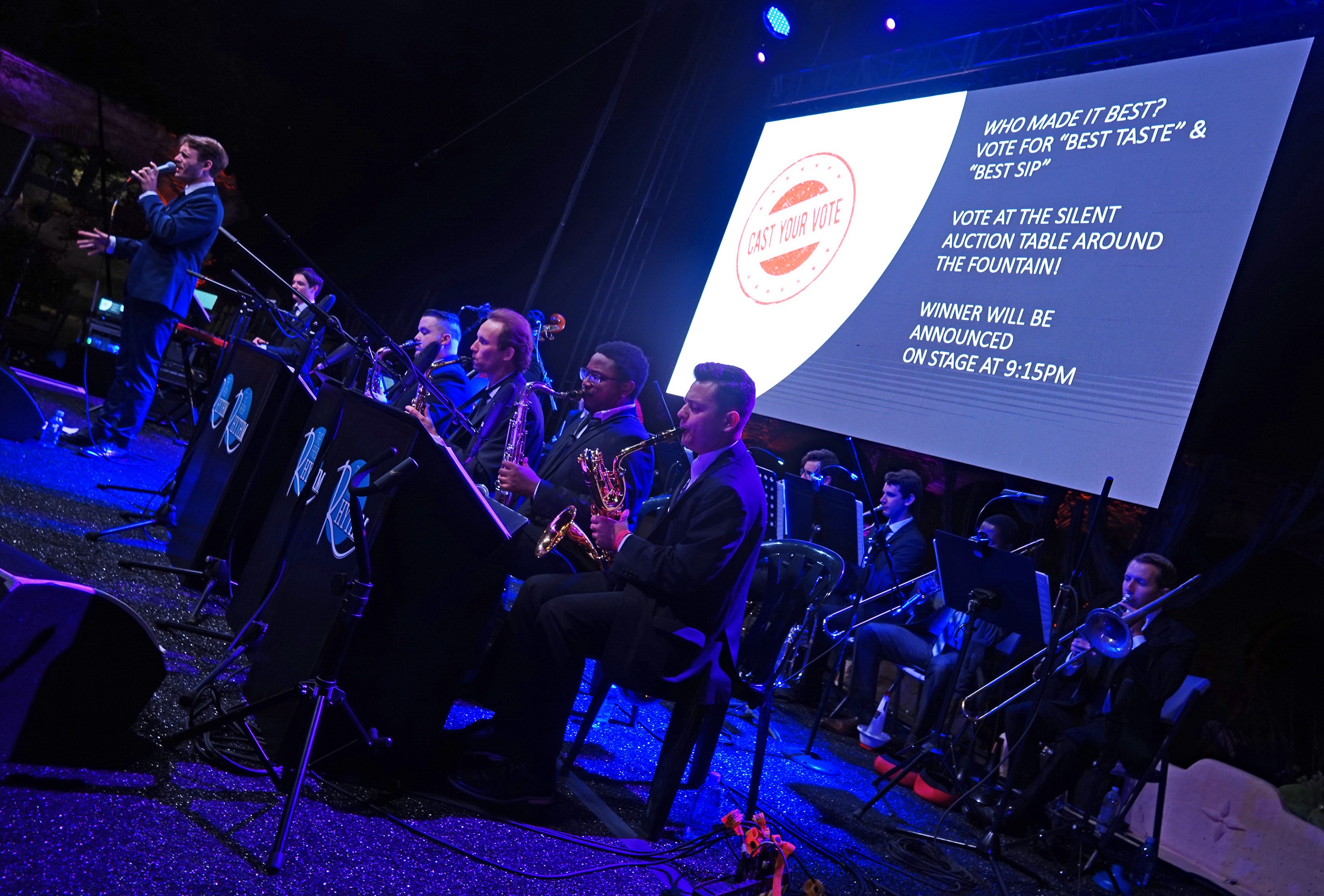 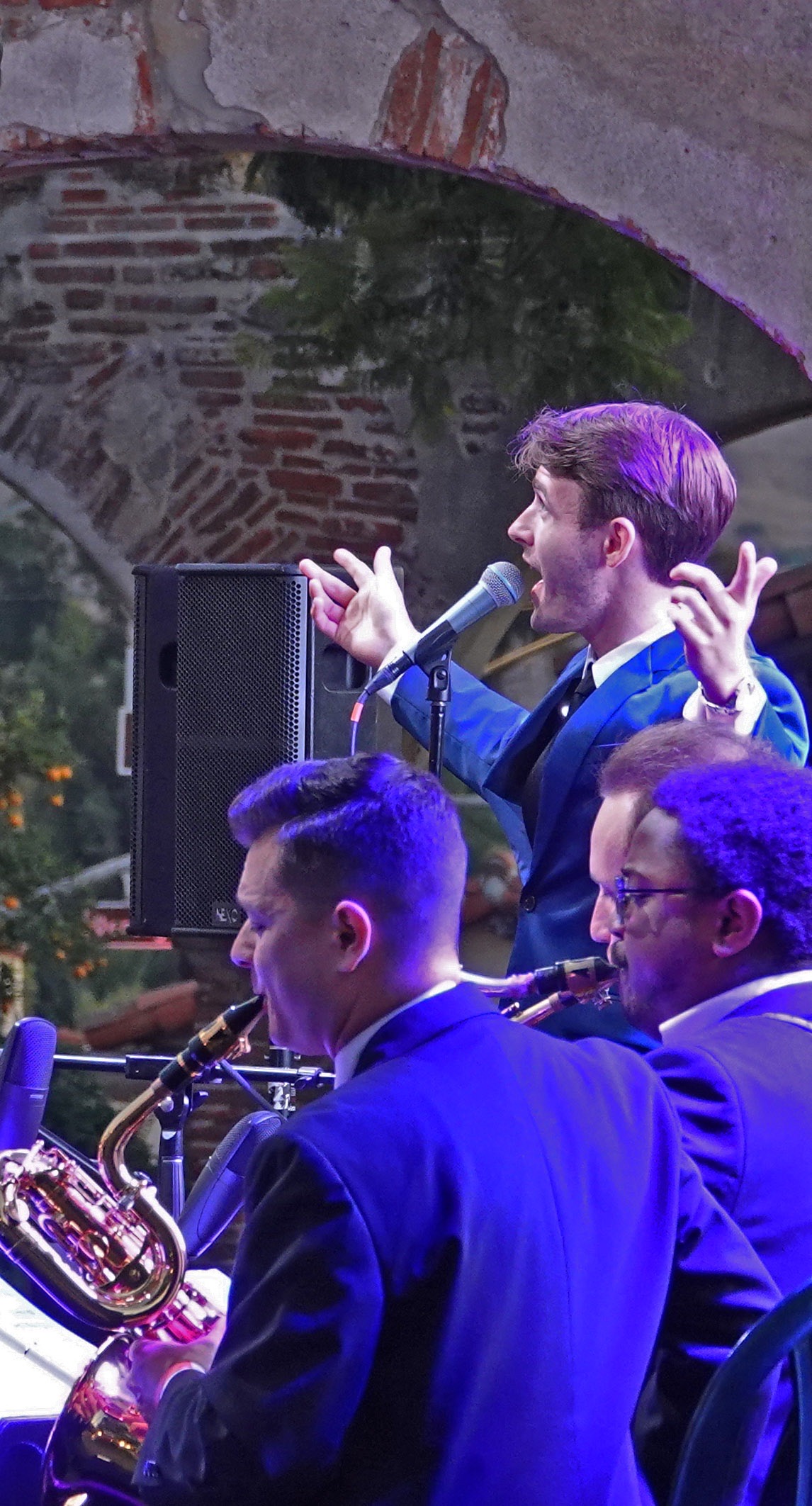 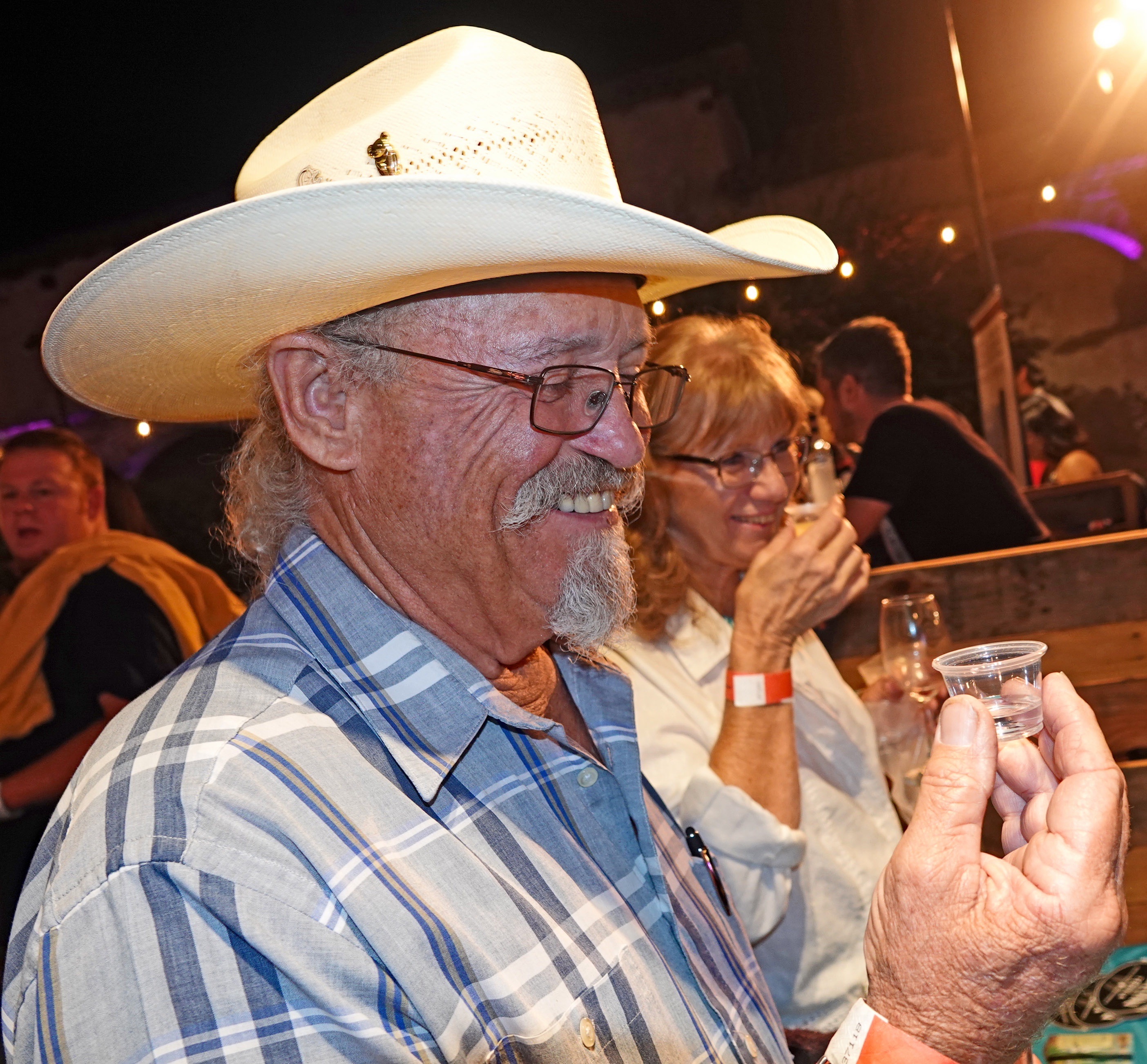 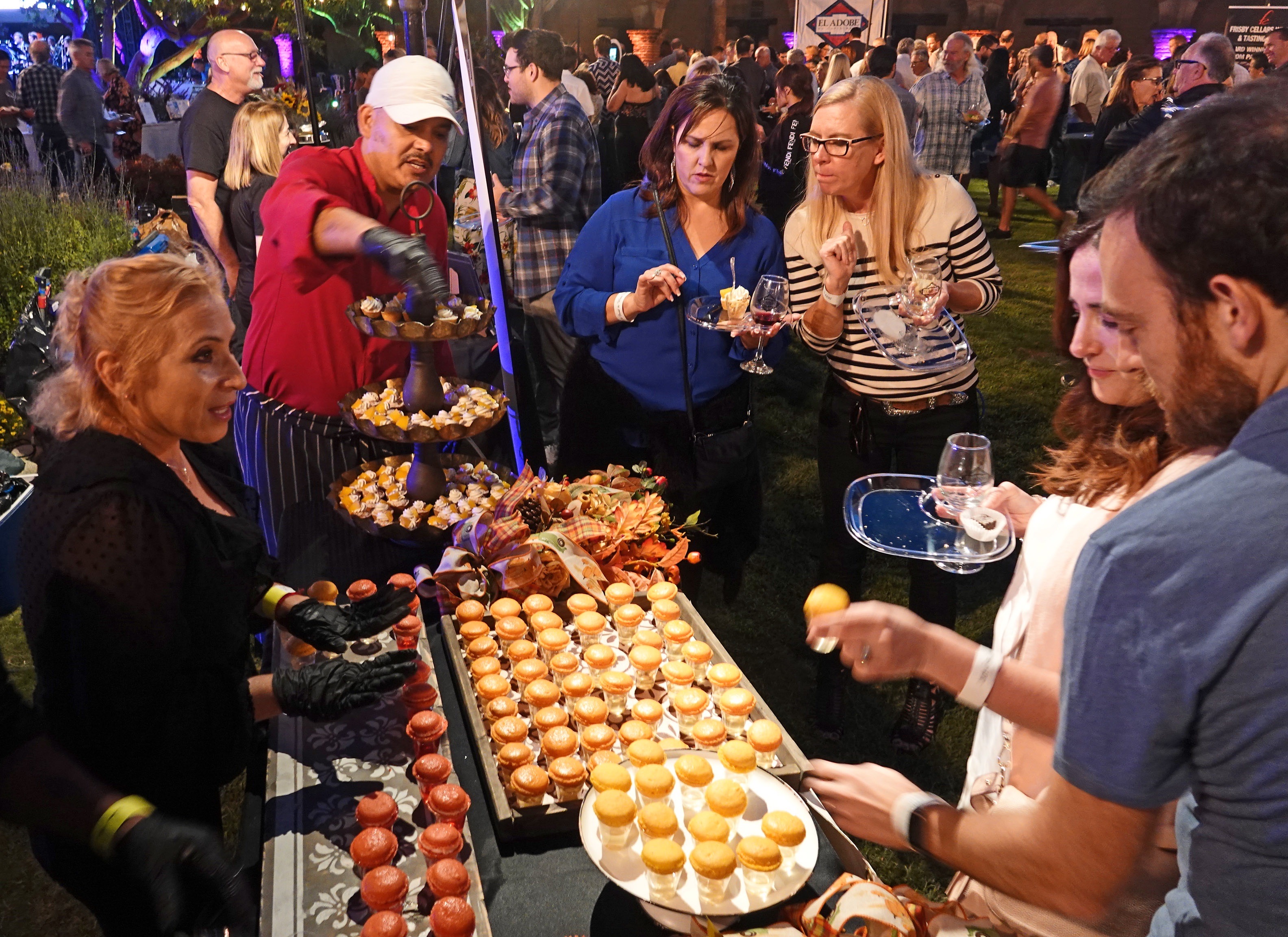 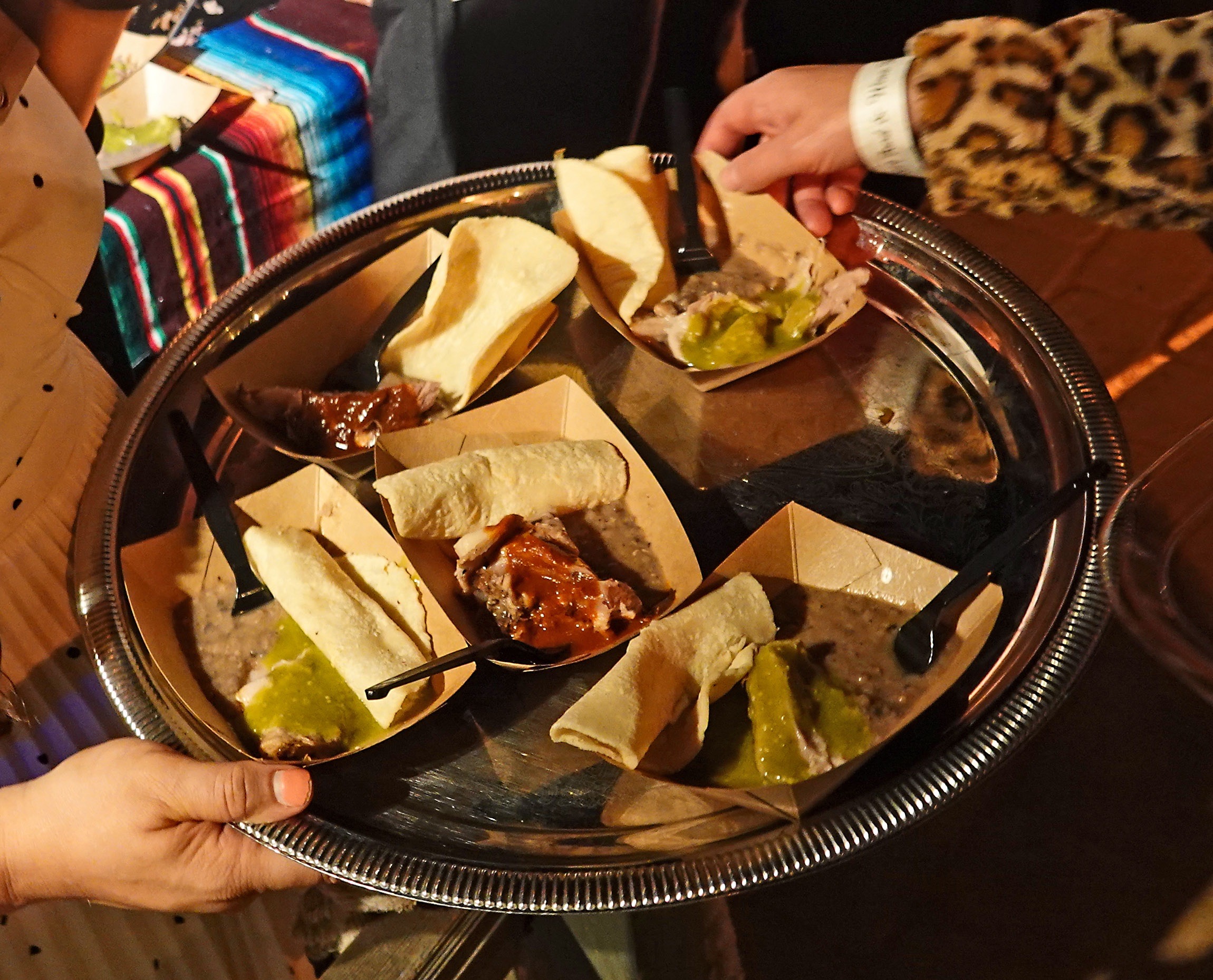 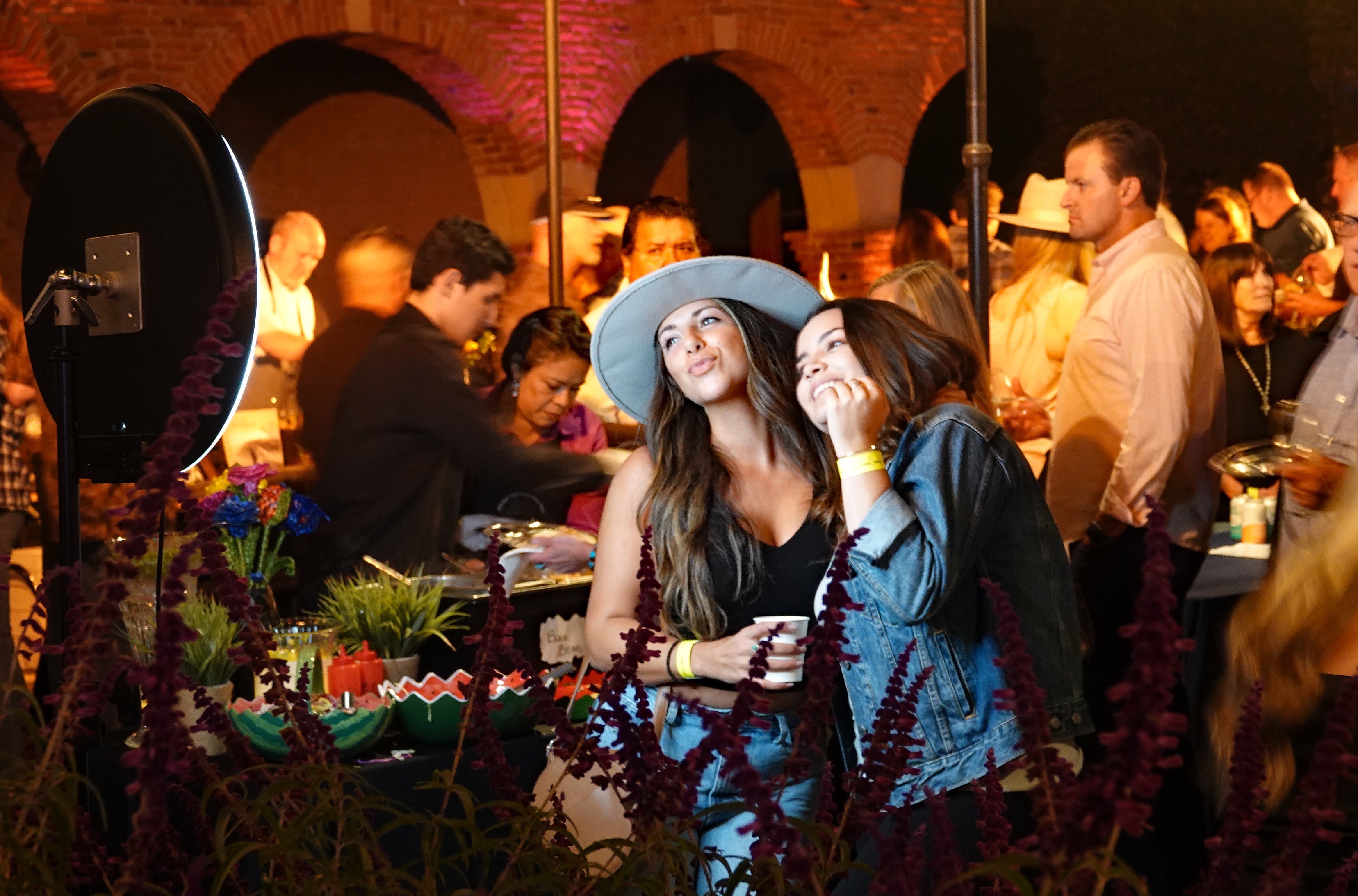 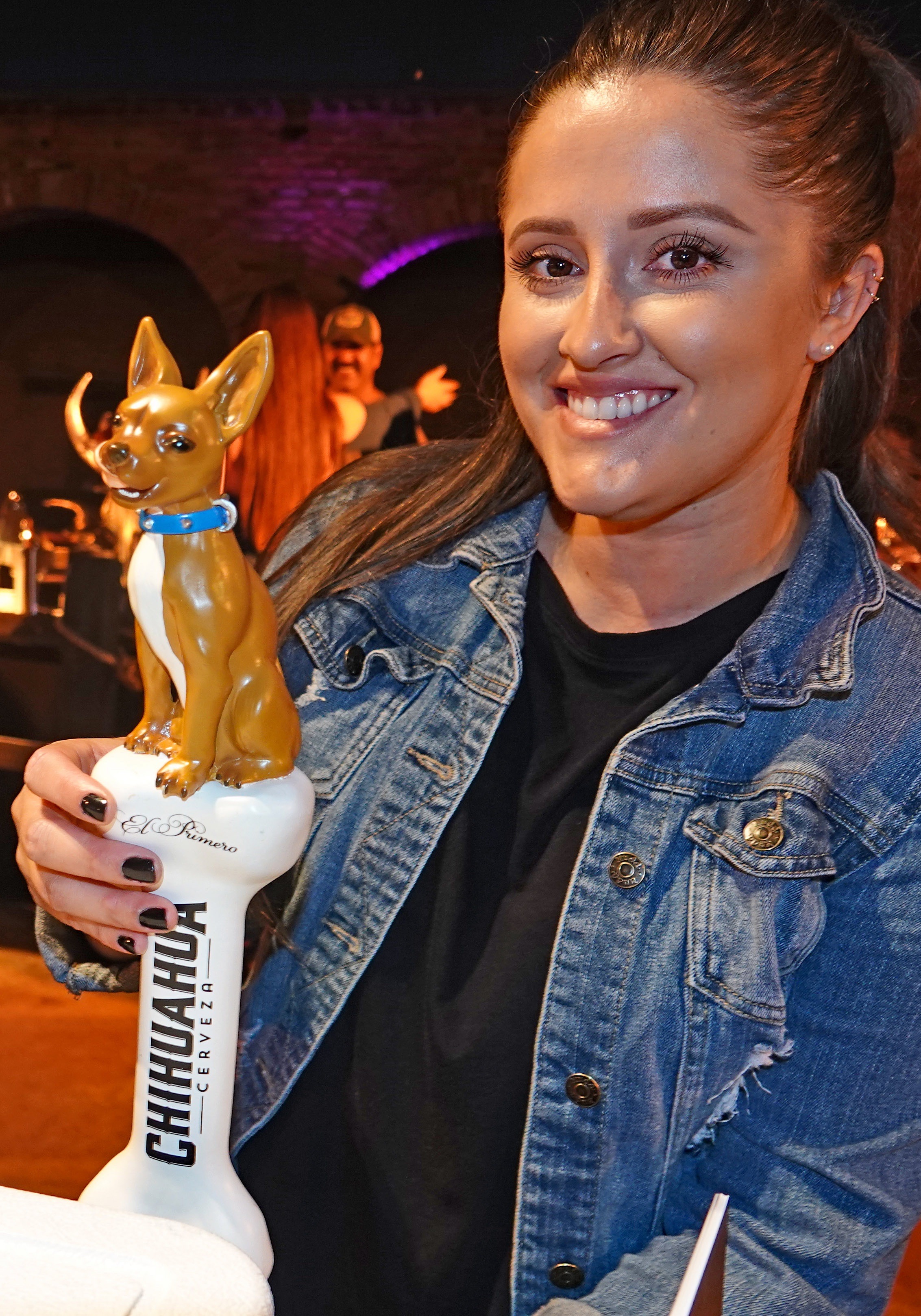 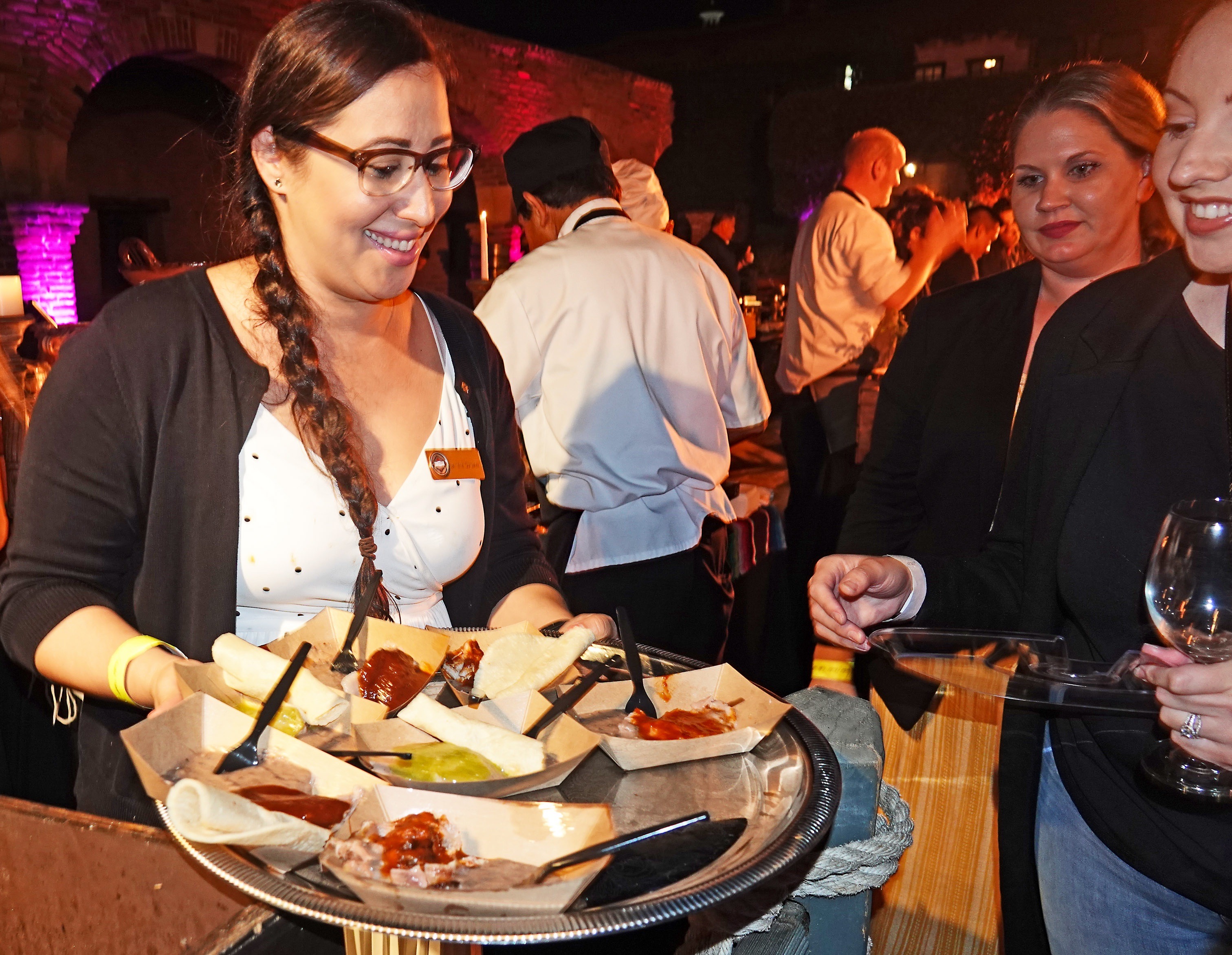 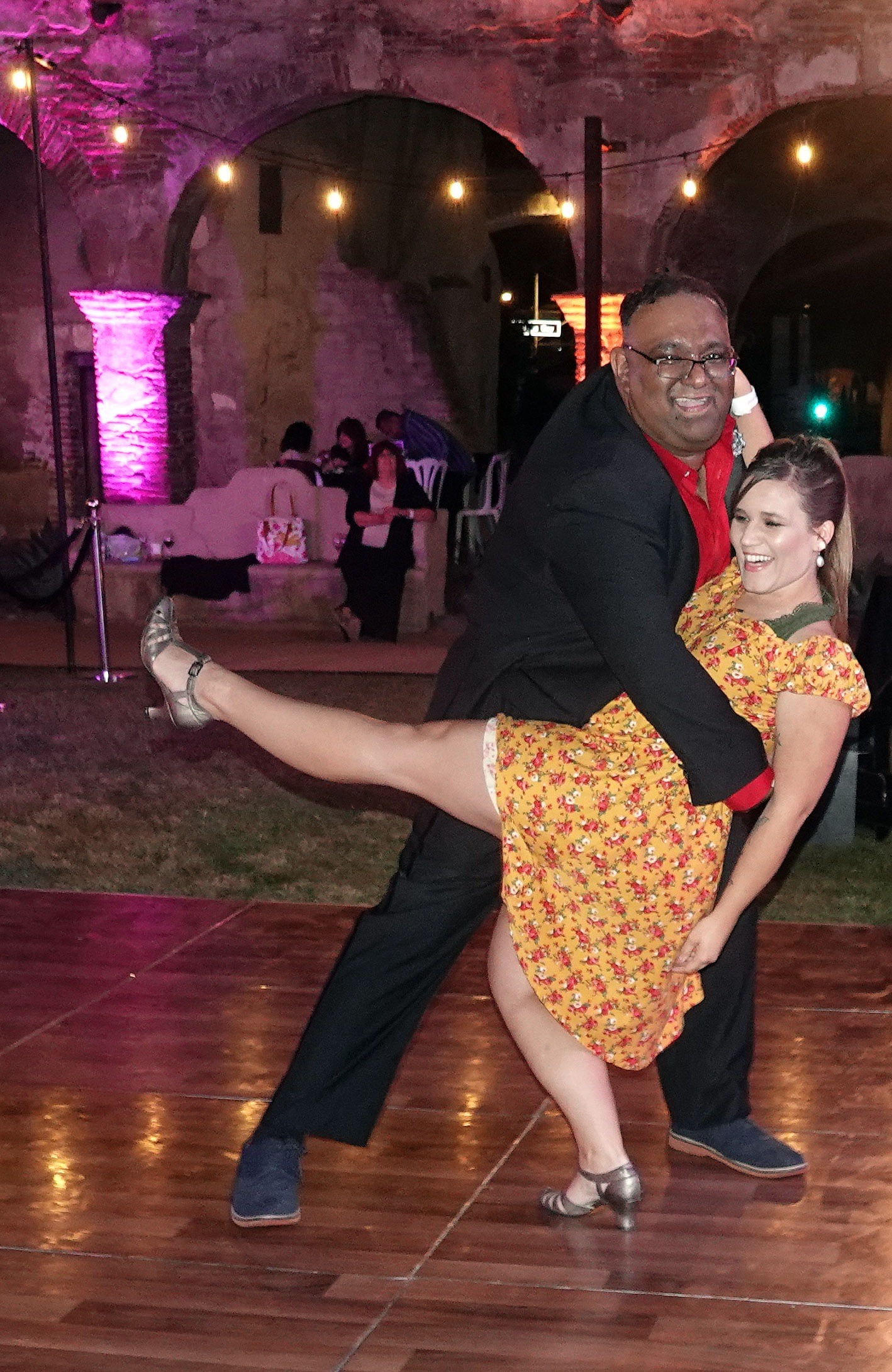 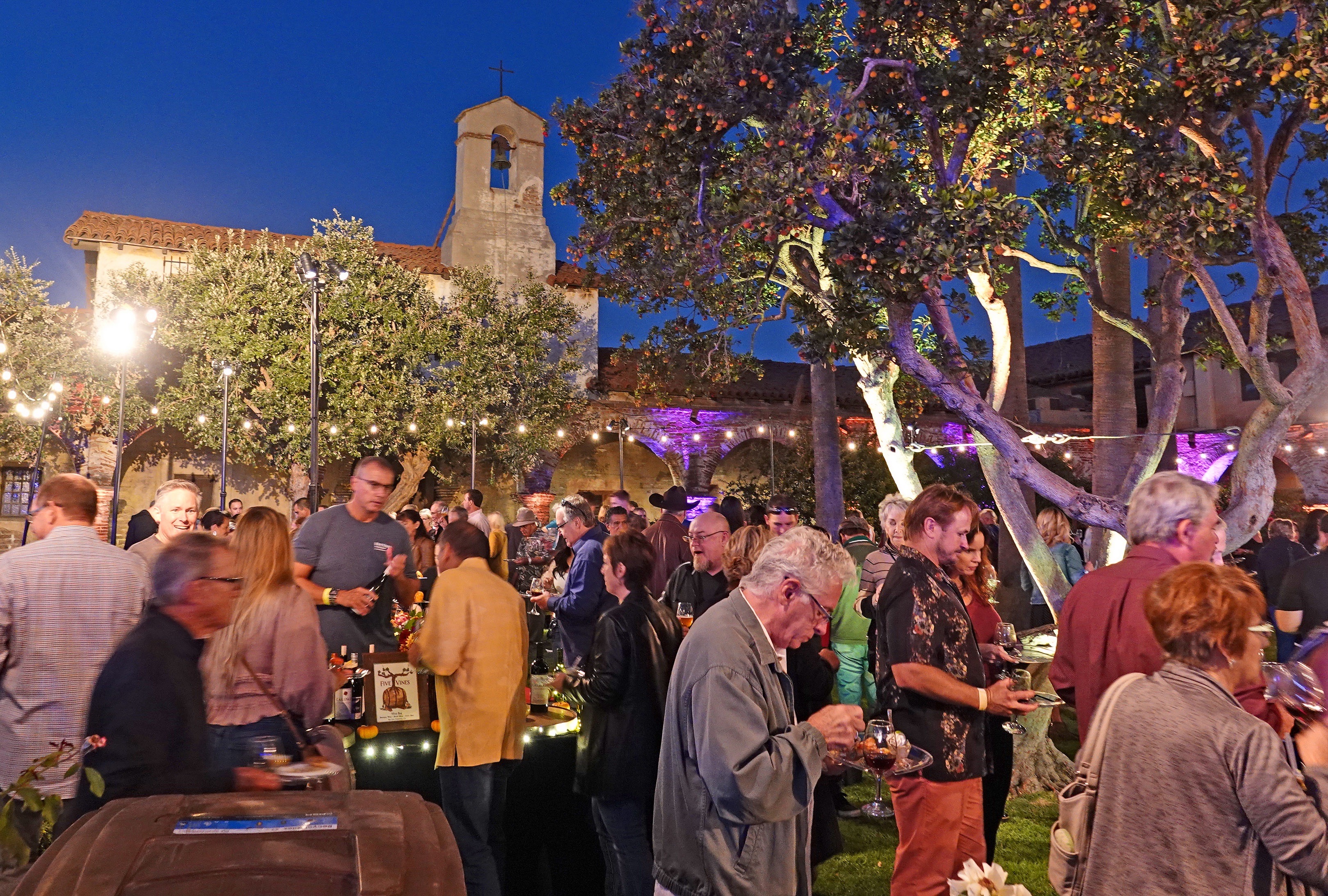 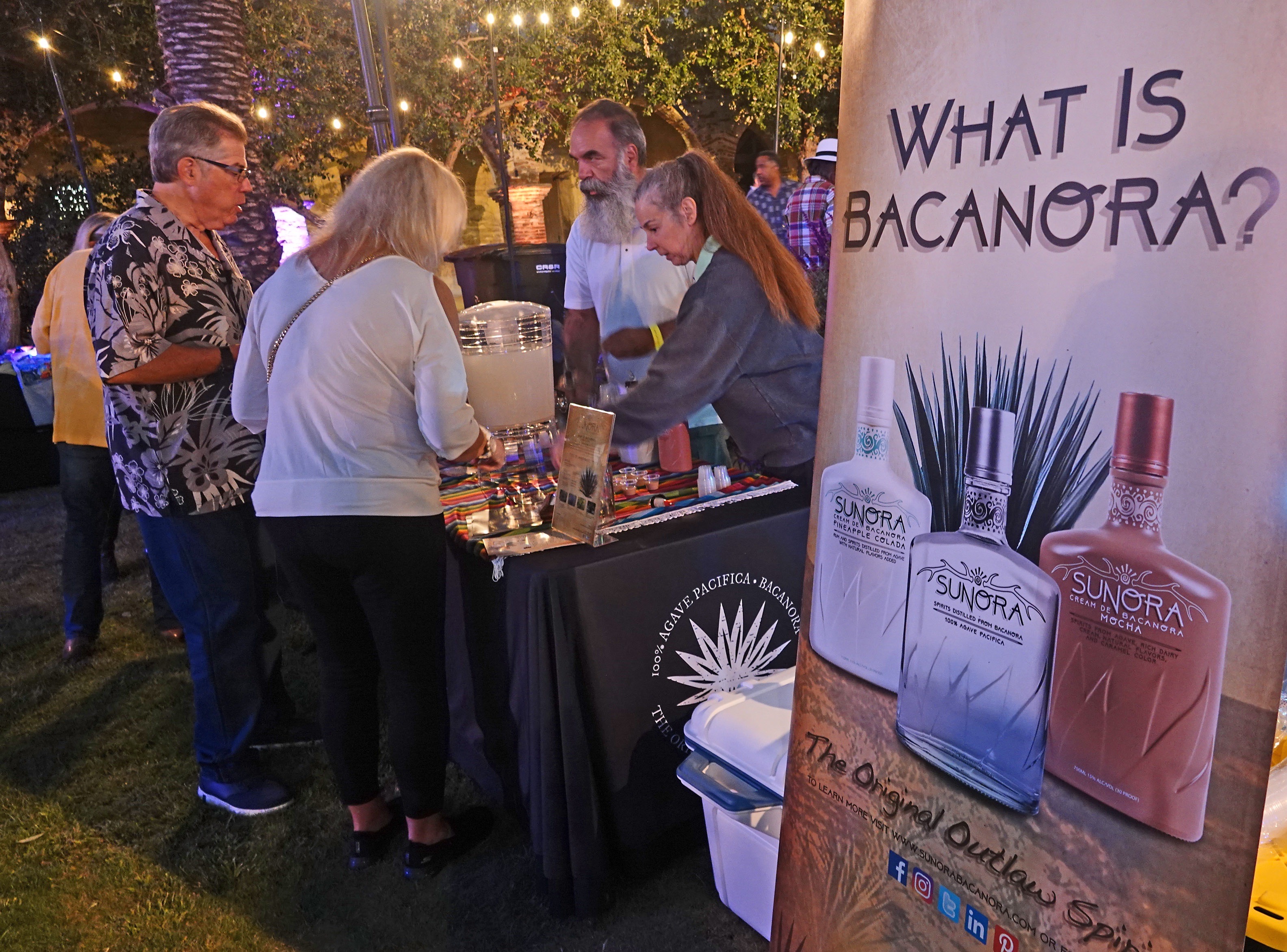 Participants in San Juan Capistrano's 23rd annual Food & Wine Festival find out for themselves what Bacanora is. Photo: Fred Swegles

The grounds of the mission were looking as resplendent as ever at the 23rd annual Food & Wine Festival hosted by the San Juan Capistrano Chamber of Commerce.

“This is such an intimate setting,” said George Peppas III, CEO of the Chamber of Commerce. “Very classy.”

The festival is the Chamber of Commerce’s annual fundraiser, helping the organization promote the local economy and local businesses.

“We have great support from the community,” Peppas said.

The festival also marks the end of the season during which migratory swallows nest in San Juan. Typically, the birds—famous in song and in lore for their yearly return to San Juan—are said to depart in October, flying to Argentina to spend the South American summer there.

“This is our goodbye to the swallows,” Peppas said.

El Adobe de Capistrano and the Swallow’s Inn headed a list of Food & Wine Festival sponsors. There were prize drawings. Silent auctions. Big-band music by The Fresh Rhythm. And community exposure for the vendors showcasing cuisines and libations.

Nathan Beckham, co-founder and director of innovation at Dog Pawrk Brewing Co., said the timing was nice to be recognized as No. 1 “sip” at the festival. He is planning in the coming months to open a tap room with a food component and a small R&D brewing system at a San Juan Capistrano location under negotiation now.

The award presented to Dog Pawrk at the Food & Wine Festival was actually a double score for the brewery.

“The day before,” Beckham said, “we were Brewery of the Event at the San Juan Hills Golf Club’s Oktobeerfest. It was a crazy couple of days!”