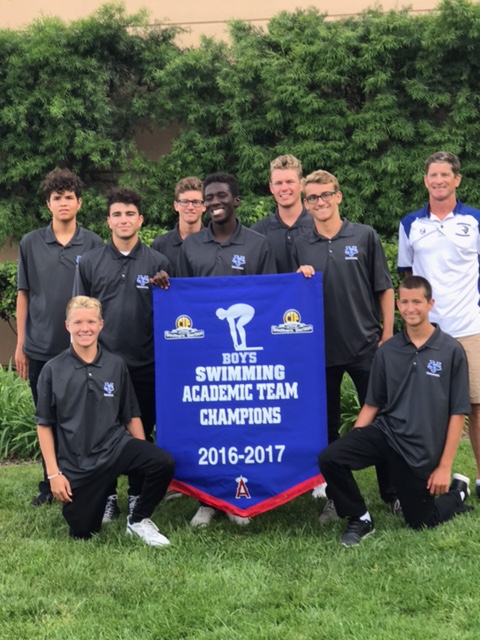 The Saddleback Valley Christian boys swim team is used to racking up accolades and trophies in the water. But this season, the team is getting things done in the classroom as well.

The Warriors were recently named 2017 CIF Academic Team Champions for small schools, where enrollment is 1,499 and below. The Warriors team currently boasts a cumulative GPA of 3.77, the top team mark for the more than 300 schools in the category.

For their efforts in the classroom, the Warriors team was honored alongside other Academic Team Champions during a pregame ceremony at Angels Stadium on April 25.

Seven of the Warriors’ 18 swimmers posted GPA’s over 4.0 in the final semester. Team co-captains Rotimi Krya and Matthew Bergen led the way with 4.31 and 4.5 GPA’s, respectively.

The team is the second squad in school history to earn the honor, joining the 2009 girls volleyball team.

In the pool, the Warriors are gearing up for CIF-SS postseason competition. SVC does not belong to a league, but will be racing in the Freelance League Finals Invitational at Capistrano Valley High School on April 29 with the hopes of posting postseason qualifying times.